Editor’s note: Severine Von Tscharner Fleming was invited to Alaska to study the commons and speak to young people on behalf of the Alaska Marine Conservation Council and the Alaska Food Policy Council. Part three of her three part report continues here. (Read An Alaska Journal Part I or Part II)

Here are a few of the confounding factors I learned about while in Alaska, all of which are logical, but largely not understood by the land-managing community of which I am a part.

What can young agrarians learn from these fisheries issues?

First, neither markets nor state-regulations are adequate drivers of stewardship. We know this from looking over the fence on our public lands. Better care of wild and semi-domesticated landscapes can take place only where stakeholders within a watershed take responsibility for the health of their territory, and adapt their stocking rates and cattle movement to the health of the land. This is happening in some places.

Second, in the urban United States, the ​“food commons” may be less glamorously wild, but we can still use the watershed to orient ourselves. Land, even private property lands within the peri-urban zones, form a resource commons for the watershed and foodshed of the city. Recent flooding in the Midwest helps make this tragically visual.

Our Peri-urban and suburban lands have tremendous ​“infrastructure” impact on the ecology of the urban environment, for drainage and water-infiltration especially. Already the state (through tax policy and agriculture assessment) gives incentives to preserve open space. The next step may be recognizing that this land can serve the common-goal of food security. This land, even small parcels, backyards, urban lots and slices of former-farms, could and should be made available for food production.

In more prosperous (coastal and scenic) parts of our country, this is happening thru non-state actors, such as land trusts and community land trusts, which use state-tax incentives and private deductible donations to conserve open space and remove the ​“right to develop.” This is not happening as much in our prime agricultural areas, nor are the restraints to development resulting in land affordable for farmers, particularly ones just starting out.

What’s clear is that the scale, scope and speed of climate de-stabilization will continue to wreak havoc within our agricultural system. Many parts of our agricultural landscape are majority commodity-based, specialized, industrialized and focused on export. Other regions are more diverse, more self-supporting — with watershed as well as foodshed benefits. As the weather-patterns continue to shift and fluctuate, my prediction is that some regions will suffer far more as a result.

Citizen action and community organizing gives us the chance to articulate a different pathway within our own watershed and food shed; to treat our own headwaters and foodlands with the respect and stewardship mandate that the Alaskans know so well. Like the Sustainable Fisheries Trust, which focuses so much on new-entrant and locally based fisherpeople, to the exclusion of foregin companies, sub-contractors and commodity export models, I believe we can develop models that suit community food security needs.

Fisherpeople all come into port to sell their fish, or sell directly to the canneries — these harbor communities have the feel of logging towns and carry many of the vernacular aspects of extraction economies. My modest proposal to the young fishermen was: get yourselves a clubhouse, a set of regular festivals, a literary space and a more easily comprehendible commitment to ecological stewardship. As GM farmed salmon comes online, you’re going to have to do a stellar job of articulating to the public why they should pay more to support fish-hunting in the wild, the glamour of rustic individuals hauling nets in the cold water feels like only the start. What about citizen science? What about inter-generational partnership? What about community ownership? What about cooperative distribution? Could some of these add to the argument as well as the richness for the entering fisher people? Could an emphasis on team-building help with recruitment, retention and economic viability for this sector? I think yes.

This is the time for us to learn from each other — across the shoreline — to fuse our histories and holistic goals, and creatively manage a system healthy enough to sustain life. As young agrarians come to comprehend the politics of fisheries and fisher people, we can become more adept at governance questions and logistics questions. Land farmers are only just entering the new era of land-commoning, just starting the work of restoring and repairing damage to our arid common lands.

The impulse of Alaska Marine Conservation Council and the Alaska Food Policy Council to engage an agrarian activist like me was a good one. As overworked and underpaid as the organic agriculture movement is, we do have an incredible cultural infrastructure. Every region in the United States has its local food groups, its movers and shakers, community potlucks and Grange halls. We have a powerful, shared culture and routine gatherings — winter conferences, seed and scion exchanges, breeders-meetings, agro-forestry monitoring communities, protests, mixers, barn dances and inspirational speakers. We are very involved with the group process and collaborative selling: Look how many of us sell direct at a farmers market or thru a CSA.

As keepers of genetic food commons, and the evolving practices of land-care, our sub-culture of organic agriculture holds a vocal and open critique of factory farming, genetic engineering, and industrial methods and scale, as well as the labor practices and ecological consequences of these systems. Seems like the ​“sustainable fisheries” peeps are similarly positioning themselves — perhaps a bit behind agriculture, but catching up!

Of course, the agricultural cultural milieu is a result of our particular history as a community of settlers, then yeoman, then petty capitalists, then players in a global food system, then increasingly as coordinators of a local economy. Our lineage of coordination in agriculture arose in confronting not depletion of a wild resource, but concentration, control, monopoly, price-pressure and manipulation by external market forces. The counterculture of organic farming, the youth culture of Greenhorns, the populist culture of the Grange, the parity culture of the farm crisis — each of these episodes has further crystalized a view of how to optimize human relations and stewardship of our land economy.

We may still dress like lumberjacks with suspenders and mustaches, but I’d argue a large and growing farm subculture has left the 1840s homestead mindset. This is borne out by the self-organizing wiki approach to appropriate technology-sharing exemplified by FarmHack, collaborative data gathering in the management of soil carbon and global volunteer networks such as WWOOF. These bring us much closer into praxis with commons approaches, and I’d argue that we have quite a number of paradigm shifts ahead of us. First on my list is to not remain stuck in the 1840s and depart from the limiting notions of ​“private property.”

We’re running into new times, and as climate patterns impact our landscapes we’ll increasingly need new frameworks. Indeed, we should be prepared to enact these new systems in times of crisis. The logic of state control, based on “ sustainable yield” of a complex and inscrutable sea — the logic of market-approaches to carbon sequestration and emission, the logic of capitalist wealth — is operating in an outdated (and extractive) pattern with rules and assumptions left over from the Enlightenment!

The prospects for a farmland commons sits on the horizon for young agrarians, who dispersed as we are nonetheless in direct contact with both ecosystems and local communities. We’re in a perfect position to innovate, to explore new systems and agreements of land use, land governance, land-ownership, access, transition and repair.

In a collaborative partnership with our customers, eaters and adjacent movements we’re floating our little farm boats on a terrestrial landscape shared by the entire human and non-human world. This project will go beyond culture, logistics, governance and crisis-management. Probably it will also require re-growing a capacity for more spiritual notions of our common humanity — daily contact with the living forces of life itself. Good thing spring is right around the corner. 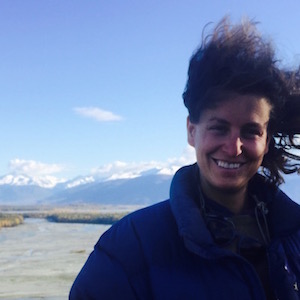 Learn more about our vision for a farmland commons at Agrarian Trust.

For information on community fisheries, or to inquire about getting access to large volumes of fish to your CSA/​local food outlet, please be in touch with North Atlantic Marine Alliance and Local Catch to learn about community supported fisheries, volume wholesale options, and coastal cooperatives, and native-led lake-fish producers. Keep it real, keep it wild, eat wild fish.

Here are a few of my radio interviews with fisher people on Heritage Radio Network.

The coming issue of New Farmers Almanac deals with issues of the commons, its governance, and the increasing need to evolve better local and collaborative systems, or as Elinor Ohrstrum would say: the poly-archy, and poly-centrism approach. This means many people working not “ alone on the frontierr” but together, in inter-generational, cross-sectoral groups to solve for patterns, not just for individuals.

For information on the young farmers movement, and our work on legislation for student loan forgiveness check out Greenhorns and the National Young Farmers Coalition. To find a farm job or apprenticeship, check out Good Food Jobs and the ATTRA sustainable farming network.

Severine von Tscharner Fleming is the founder and director of Greenhorns, a national organization established in 2007 that promotes, supports and recruits young farmers.

Have thoughts or reactions to this or any other piece that you'd like to share? Send us a note with the Letter to the Editor form.
More articles by Severine Von Tscharner Fleming
Rural America
A Farm Organizer Visits Fish Country: An Alaska Journal, Part I
Rural America
A Farm Organizer Visits Fish Country: An Alaska Journal, Part II
Similar articles
ViewpointRural America
The U.S. Dairy System Is in Crisis and Exporting More Milk to Canada Won’t Fix It
U.S. farm policies are bad for dairy farmers, cows, customers and the climate. We shouldn’t try to defeat Canada’s dairy system—we should learn from it.
Niaz Dorry
Rural America
Why Climate Plans Must Include Farmers of Color
Proposed legislation would give farms resources to fight climate change. Will farmers of color get equal access?
Hadassah Patterson
Rural AmericaInvestigationGoodman Institute
Trump's Online SNAP Program Helps Amazon and Walmart, But Leaves Rural People Behind
The government's online food assistance program doesn’t include independent grocers and ignores the gaps in rural infrastructure.
Bryce Oates and Debbie Weingarten
Join our newsletter
Fearless journalism, emailed straight to you.
Subscribe and Save 59%