Artists Explore the Hidden Tolls of Life Lived at a Distance

The everyday lives of everyday people are experiencing a major disruption. Millions are unemployed or overwhelmed with child care while struggling to keep an income. Feelings of isolation and anxiety abound. No one really knows what comes next.

Annee Schwank, an illustrator in Tampa, Fla., says, ​“When I became a mom in 2019 after a difficult pregnancy, I felt invincible. I believed I’d be able to handle whatever life threw at me.” In her illustration Schwank explores how self-quarantine upended her expectations. ​“The days begin before the sun rises and end long after the sun sets. I squeeze in work during my daughter’s naps and steal precious time hiding in the bathroom to work in peace without her slapping on the keyboard. Despite the exhaustion and the chaos, I consider myself lucky. I witnessed her first words and steps, which I would have otherwise missed sitting in traffic.” 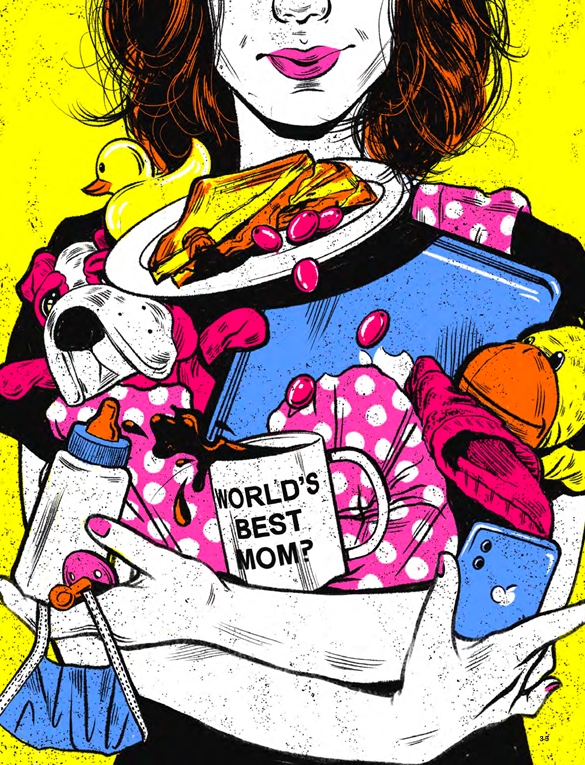 Narciso Espiritu had just moved to Detroit with his girlfriend earlier this year. ​“This was my first time moving away from home,” he says. “[I thought] I would be able to find work easily, make new friends, maybe adopt a puppy.” But it’s been hard, he says. ​“I’ve been dealing with isolation and joblessness. I’ve just been applying for work on the days where I wasn’t so beleaguered with anxieties over the state of the world.” Espiritu’s illustration depicts feelings of claustrophobia and helplessness against time sinks like Netflix, the video game Animal Crossing and baking sourdough bread — as visions of reality filter through. 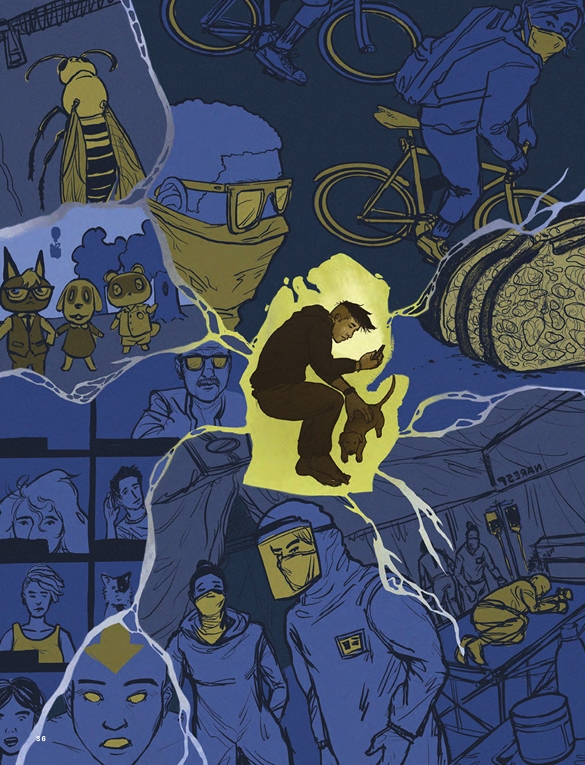 Johnalynn Holland is a multimedia producer and writer in Washington, D.C. ​“In the first weeks of the outbreak, everyone in my mostly white, affluent building made an effort to follow the CDC guidelines, wearing masks and socially isolating,” she says. ​“But when statistics revealed the disproportionate Black and Brown fatalities, white people resumed their carefree, mask-free lives. White residents congregate in the lobby where Black and Brown maintenance and concierge staff — all in masks and gloves — have to work.” Holland’s illustration juxtaposes these disparities layered over a bar graph of Covid-19 deaths in her city. ​“As I walk my dog in a face mask, gloves and hair covering, I witness white people jogging without masks past Black and Brown elders and workers, past the homeless,” Holland says. ​“I notice the smirks of white women at the full protective gear I wear — because, I know as a Black woman with a compromised immune system, my medical care would not be prioritized.” 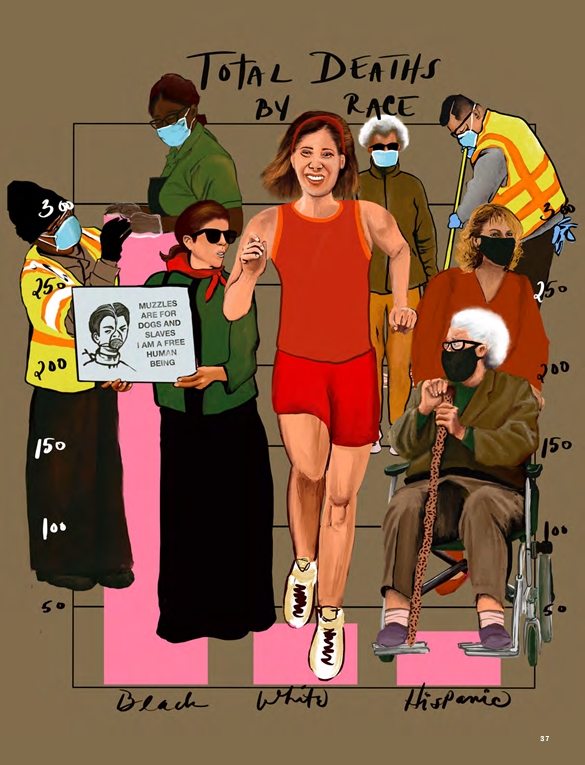 Diana Babineau is managing editor at In These Times. She is a consulting editor for Kenyon Review, and her poetry appears in North American Review, The Common, and the anthology Dear America: Letters of Hope, Habitat, Defiance, and Democracy.

Have thoughts or reactions to this or any other piece that you'd like to share? Send us a note with the Letter to the Editor form.
More articles by Diana Babineau
Culture
Ruth Bader Ginsburg’s Death Felt Like the Loss of a Friend
Ginsburg’s story is, in many ways, the story of women in the 20th century. It’s no surprise, then, that her loss feels deeply personal.
Feature
Unions Have Supported Democrats for Decades. It’s Time for Dems To Keep Their Promises.
Unions have played a critical role in helping Democrats get elected. What do they have to show for it?
Similar articles
Culture
These Guns for Hire
Blackwater unites conservative Catholics, evangelicals and neoconservatives to fight a theoconservative holy war
Chris Barsanti
Culture
Why Hemingway Is Chick-Lit
Women read more fiction than men.
Lakshmi Chaudhry
Culture
Country’s Jingoistic Jingles
Craig Aaron
Join our newsletter
Fearless journalism, emailed straight to you.
Subscribe and Save 59%