Our Chemical-Dependent, Profit-Driven, Industrial Ag Complex is Not Going Quietly

In an attempt to stem the tide of growing public concern, the industrial agricultural establishment has mounted a nationwide propaganda campaign designed to, in their words, ​“increase confidence and trust in today’s agriculture.” The board members of one front group, the U.S. Farmers and Ranchers Alliance, include the American Farm Bureau Federation, John Deere as well as major agricultural commodity organizations. Board members Monsanto and DuPont have each pledged $500,000 per year to the campaign.

A recent study by Friends of the Earth, an international network of environmental organizations, documents similar ​“front groups” that have been spending more than $25 million per year to polish the tarnished public image of industrial agriculture. This doesn’t include the campaigns of individual industrial agricultural apologists that are carried out through public schools, 4-H and Future Farmers of America, local civic clubs, and state and local mass media. That said, the agricultural establishment seems to consider their PR campaign as little more than a ​“holding action” against growing public concerns. They are using their political power to establish legislative protections that would prevent effective regulation. 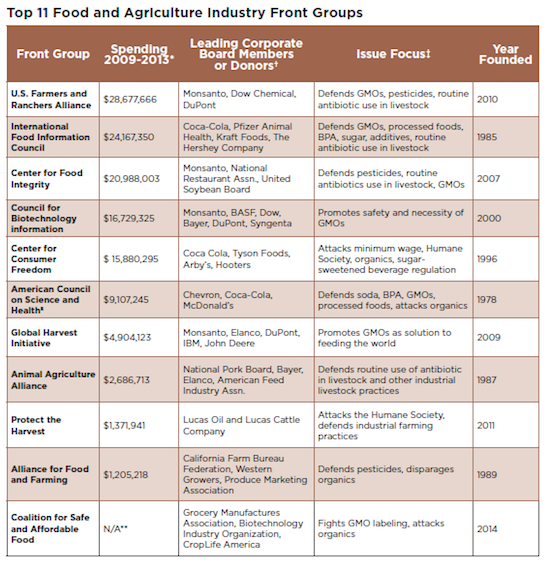 All 50 states already have some form of right-to-farm law, but they must be strengthend. The early laws, beginning in the 1980s, were enacted to minimize the threat to nuisance litigation and prohibitive state and local government regulation of ​“normal farming practices.” Current political initiatives, however, allow the agricultural establishment to define ​“industrial farming practices” as a legally protected economic right. Industrial agriculture’s advocates know it’s vulnerable to growing public concerns and they’re doing everything in their power to protect it.

The agricultural establishment has essentially abandoned their earlier strategy for demanding that regulation of industrial agriculture be based on ​“sound science.” They seem to understand that the scientific evidence supporting the growing public concerns is now clear, compelling, even overwhelming. I personally think it has become misleading to cite a few specific studies when there is so much scientific information documenting the environmental, social, economic, and public health problems associated with industrial agriculture. I have started relying on meta-studies, where scientists or teams of scientists review dozens or hundreds of credible studies and draw logical, generalizable conclusions.

For example, after reviewing more than 350 studies documenting the failures of industrial agriculture, a 2016 independent study by the International Panel of Experts on Sustainable Food Systems (IPES-food) concluded:

“Today’s food and farming systems have succeeded in supplying large volumes of foods to global markets, but are generating negative outcomes on multiple fronts: widespread degradation of land, water and ecosystems; high GHG emissions; biodiversity losses; persistent hunger and micro-nutrient deficiencies alongside the rapid rise of obesity and diet-related diseases; and livelihood stresses for farmers around the world.”

In support of fundamental change, the report continues:

“What is required is a fundamentally different model of agriculture based on diversifying farms and farming landscapes, replacing chemical inputs, optimizing biodiversity and stimulating interactions between different species, as part of holistic strategies to build long-term fertility, healthy agro-ecosystems and secure livelihoods. Data shows that these systems can compete with industrial agriculture in terms of total outputs, performing particularly strongly under environmental stress, and delivering production increases in the places where additional food is desperately needed. Diversified agroecological systems can also pave the way for diverse diets and improved health.”

“It is not a lack of evidence holding back the agroecological alternative. It is the mismatch between its huge potential to improve outcomes across food systems, and its much smaller potential to generate profits for agribusiness firms. The way food systems are currently structured allows value to accrue to a limited number of actors, reinforcing their economic and political power, and thus their ability to influence the governance of food systems. Simply tweaking industrial agriculture will not provide long-term solutions to the multiple problems it generates. We must change the way we set political priorities.”

“Every major farm policy since the 1970s, in one way or another, has supported the industrial paradigm”

Contrary to popular opinion, the current industrial agricultural system is not a natural consequence of free markets, but instead is the consequence of a premeditated shift in agricultural policies during the 1970s. Historically, the fundamental purpose of agricultural policy has been to provide domestic food security. No nation, at least until now, has been willing to trust its food security to the global marketplace. U.S. farm polities from the 1930s through the 1960s were premised on the proposition that food security could best be assured by keeping independent family farmers on the land. Family farmers had been the cultural foundation of American society and were committed to maintaining the productivity of their land — not only for the benefit of their families and communities but also for the food security of their nation.

Farm policy in the United States was fundamentally changed during the early 1970s — the Nixon-Butz era. The policy objectives shifted from supporting family farms to promoting the industrialization of agriculture. But industrialization is not defined by the shift from an agrarian to a manufacturing economy, which is simply a symptom of industrialization. The basic strategies of industrialization are specialization, standardization, and consolidation of control. Specialization increases productivity and economic efficiency (i.e. division of labor). Specialized functions must be standardized to create a complete and coherent product process (i.e. an assembly line). Standardization allows the production to be routinized and mechanized, further increasing efficiency and simplifying management. This allows management control to be consolidated into larger, often corporate, economic entities (i.e. economies of scale).

The chemical and mechanical technologies developed for the war effort during World War II allowed agricultural production to be standardized, routinized and mechanized. Fields and feedlots could be transformed into biological assembly lines and farms into factories without roofs. Small, diversified, independent family farms could be consolidated into large, specialized, corporately controlled ​“factory farms.” Food security would then be ensured not by family farms but by reducing the cost of food production and making good food affordable for all — the cheap food policy. In the meantime, temporary food assistance programs would fill in any remaining gaps.

The farm policies of the Nixon-Butz era were designed specifically to support, subsidize, and promote specialization, standardization, and consolidation of agricultural production into ever-larger farming operations. Every major farm policy since the 1970s — price supports, farm credit, crop insurance, disaster payments, farm tax credits and depreciation allowances, etc. — in one way or another has supported the industrial paradigm. Soil and water conservation and more recent organic and sustainable farming programs, adopted under public duress, are under constant threat, with funds often diverted to subsidize industrial farming practices. ​“Plant fencerow to fencerow” and ​“get big or get out” remain the watchwords of U.S. farm policy.

While these cheap food policies have succeeded in increasing agricultural productivity and economic efficiency, they have failed in their only legitimate public purpose: Industrial agriculture has failed to provide ​“domestic food security.” In spite of reducing the percentage of the average American’s disposable income spent for food, they have failed to provide everyone with enough good food to support healthy, active lifestyles. Indeed, the necessary shift in federal farm policy must be supported by public acceptance of the fact that the current industrial agricultural system isn’t working and isn’t going to work in the future.

“Change is not just an option; it is an absolute necessity”

A far larger percentage of people in the United States are ​“food insecure” today than during the 1960s. Nearly 15 percent of Americans are classified as food insecure and more than 20 percent of our children live in food insecure homes. The ​“temporary” food assistance programs of the 1960s have been extended and expanded but have failed to fill the gaps left by the industrial food system. In addition, the diets of many Americans are high in calories but lacking in essential nutrients, leading to an epidemic of obesity and other diet-related health problems. Diabetes, heart disease, hypertension, and various diet-related cancers, are projected to claim about one-in-five dollars spent for health care in the United States by 2020 — erasing virtually all of the gains in public health over the past several decades. While the percentage of America’s total economic output required for food dropped by one-half, the percentage going to health care more than doubled.

In failing to meet the basic food needs of the present, industrial agriculture has failed to meet even the first requisite for agricultural sustainability. And there is virtually no possibility that it can meet even the most basic food needs of generations of the future, as it systematically pollutes the environment, threatens public health, and depletes and degrades the natural and human resources that must support long-run agricultural productivity. Change is not just an option; it is an absolute necessity.

The problems in U.S. agriculture are systemic or ingrained in the industrial system of production and cannot be effectively addressed without fundamentally changing the agricultural system. This will require a fundamental shift in agricultural and food policies, beginning with farm policies.

John Ikerd was raised on a small dairy farm in southwest Missouri. He received his BS, MS, and Ph.D. degrees in agricultural economics from the University of Missouri. After working in private industry, he spent 30 years in various professorial positions at North Carolina State University, Oklahoma State University, University of Georgia and the University of Missouri before retiring in early 2000. He now spends most of his time writing and speaking on issues related to sustainability with an emphasis on economics and agriculture. He currently resides in Fairfield, Iowa and is the author of several books including Essentials of Economic Sustainability, Sustainable Capitalism, A Return to Common Sense and Crisis and Opportunity: Sustainability in American Agriculture and A Revolution of the Middle.
Have thoughts or reactions to this or any other piece that you'd like to share? Send us a note with the Letter to the Editor form.
More articles by John Ikerd
Rural America
Can the Corporate Takeover of Dairy Farms be Stopped?
Rural America
Land Trusts Are a Step Toward a Step Toward a Sustainable Future for Agriculture
Rural America
The Three “Great Separations” that Unravelled Our Connection to Earth and Each Other
Similar articles
ViewpointRural America
Welcome to the Pyrocene
Our society’s appetite for one kind of burning—fossil fuel combustion—has thrust us into a new Fire Age that is reshaping the Earth.
Stephen Pyne
DispatchRural America
Indigenous Water Protectors Face Off Against the “Pandemic Pipeline”
Biden halted Keystone XL, but Enbridge’s Line 3 would pipe the same tar sands oil into the U.S. and across Anishinaabe treaty lands.
Clara Liang
Rural America
Agricultural Workers Lose Millions of Dollars Each Year to Employer Wage Theft
It’s against U.S. labor laws, but that hasn’t stopped employers from withholding more than $65 million in worker wages over the last two decades.
Pramod Acharya
Join our newsletter
Fearless journalism, emailed straight to you.
Subscribe and Save 66%