Glyphosate, the controversial main ingredient in Monsanto​’s Roundup and other herbicides, is being connected to Lake Erie’s troubling algae blooms, which has fouled drinking water and suffocated and killed marine life in recent years.

Phosphorus—attributed to farm runoff carried by the Maumee River — has long been identified as a leading culprit feeding the excessive blooms in the western Lake Erie basin. Now, according to a new study from chemistry professor Christopher Spiese, a significant correlation has been established between the increased use of glyphosate to the percentage of dissolved reactive phosphorus (DRP) in the runoff.

As No-Till Farmer observed from the study, DRP loads in Lake Erie increased in the mid-1990s at the same time that farmers began the widespread cultivation of crops genetically engineered to withstand multiple applications of Roundup.

“For every acre of Roundup Ready soybeans and corn that you plant, it works out to be about one-third of a pound of P [phosphorus] coming down the Maumee,” Spiese told the agricultural publication.

Here’s how the team came to the conclusion, as No-Till Farmer reported:

Through his own and others’ research, Spiese found that depending on the types of metal in the soil, glyphosate does release P. For example, when glyphosate is applied to soil containing iron oxide-hydroxide, P is immediately released. But almost nothing is removed when it’s an iron oxide material.

Finally, Spiese took soil samples all over the Maumee watershed, applied P to them and then sprayed glyphosate to see how much P was released vs. soil that wasn’t sprayed with glyphosate after 24 hours. He saw desorption occurred all over the watershed, but certain areas were higher than others, specifically in the southeastern corner.

Based on the average two glyphosate applications growers make every year, Spiese estimates that overall, 20-25 percent of the DRP runoff is caused by glyphosate. But depending on the location within the watershed, that percentage could be much lower or much greater.

“Some of those sites, it’s less than a percent. Other sites it’s almost 100 percent,” he says.

Previous studies have tied glyphosate to the phosphorous fueling Lake Erie’s blue-green algae. In 2009, Ohio Sea Grant researchers, Drs. R. Michael McKay and George Bullerjahn of Bowling Green State University, found that glyphosate could only be detected in the lake at certain times of year — after crops are planted.

“Our research is finding that Roundup is getting into the watershed at peak farming application times, particularly in the spring,” McKay said.

Approximately 1,000 metric tonnes (about 2.2 million pounds) of Roundup is applied in the Lake Erie watershed per year, and it is being detected in adjacent waterways particularly in the spring, the Ohio Environmental Protection Agency (EPA) noted from McKay and Bullerjahn’s study.

The researchers also found that the blue-green algae (cyanobacteria) in the lake are capable of using phosophonates. 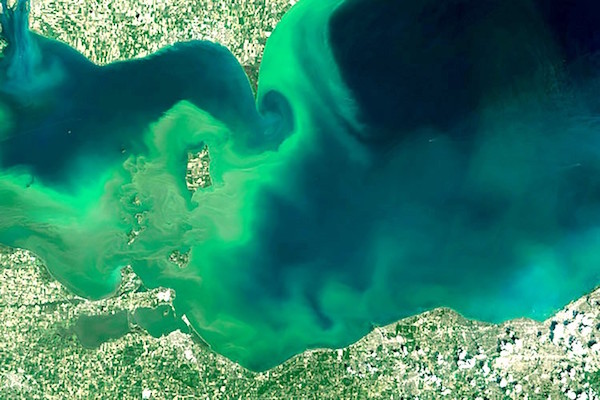 Harmful Lake Erie blooms have increased at record levels over the last decade, according to the U.S. EPA and are expected to become more common due to warmer temperatures and heavy rainfall that feed algae growth.

The toxic algae rob oxygen from the waters creating dead zones where fish and other marine life are unable to survive. The algae is also a threat to humans — swallowing it can cause health problems such as rashes, vomiting, numbness and difficulty breathing.

In February this year, the United States and Canada announced a goal to reduce the amount of phosphorus entering affected areas of Lake Erie by a total of 40 percent by 2025. 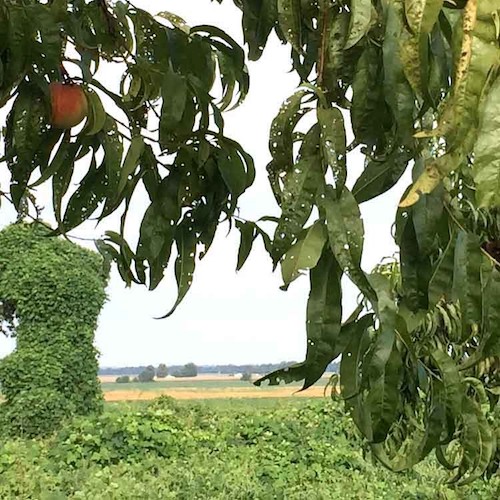 A dead fish surrounded by algae in Lake Erie during a record-setting algae bloom in 2011. (Photo: Tom Archer / NOAA)

(This article was published on EcoW​atch​.com)

Lorraine is a freelance writer for EcoWatch. Her journalism career began in New York City, where she received a M.A. from NYU’s Arthur L. Carter Journalism Institute, and where she worked at several entertainment and lifestyle publications, including the New York Post’s Page Six.
Have thoughts or reactions to this or any other piece that you'd like to share? Send us a note with the Letter to the Editor form.
More articles by Lorraine Chow
Rural America
A Pipeline Is Leaking Natural Gas into Alaska’s Cook Inlet ... and Has Been for 3 Months
Rural America
Monsanto Expands Louisiana Herbicide Facility, Some Locals Say “Toxic Company” Isn’t Worth the Jobs
Rural America
Herbicide Drift: Missouri Peach Farmer Sues Monsanto for Crop Damages
Similar articles
ViewpointRural America
The U.S. Dairy System Is in Crisis and Exporting More Milk to Canada Won’t Fix It
U.S. farm policies are bad for dairy farmers, cows, customers and the climate. We shouldn’t try to defeat Canada’s dairy system—we should learn from it.
Niaz Dorry
Rural America
Why Climate Plans Must Include Farmers of Color
Proposed legislation would give farms resources to fight climate change. Will farmers of color get equal access?
Hadassah Patterson
Rural AmericaInvestigationGoodman Institute
Trump's Online SNAP Program Helps Amazon and Walmart, But Leaves Rural People Behind
The government's online food assistance program doesn’t include independent grocers and ignores the gaps in rural infrastructure.
Bryce Oates and Debbie Weingarten
Join our newsletter
Fearless journalism, emailed straight to you.
Subscribe and Save 59%