Does farm size matter to agricultural sustainability? My answer consistently has been, ​“Yes!” It’s easier to manage a small farm sustainably because sustainability requires more management per acre farmed or dollar invested. That said, unsustainable large farms are not unsustainable because they are large, they are large because they are unsustainable. They are managed to achieve economic efficiency through ​“economies of scale.” Like other industrial operations, most large farms compromise their ecological and social integrity in their quest for economic efficiency and thus are not sustainable. I have always acknowledged the possibility of managing a large farm sustainably, but most are not.

During a recent trip to Brazil, I had an opportunity to visit a large farm that I believe is at least potentially managed sustainably. The purpose of my trip was to make a presentation at the tenth Biennial Seminar of ASBRAM, an agribusiness association that supplies mineral supplements for Brazilian beef producers. I spoke about the challenges and opportunities for ​“sustainable beef production.”

One of the highlights of the trip was an overnight visit to a 10,000-acre beef ​“farm,” which would be called a ranch in the United States. As the farm was accurately described to me in advance: ​“Fazenda Novo Mundo is a beautiful place in Minas Gerais State where the family Penteado Cardoso have done very interesting work with Nelore cattle.”

Nelore is a breed of the Zebu species, most commonly identified with the Brahman breed of cattle in the United States. Nelore Lemgruber cattle were introduced into Brazil from India in 1878 and the breed has been selected for pasture, naturally, since that time. In the last 30 years, my hosts explained, its improvement has started to prioritize the characteristics of Adaptation to the Environment (pasture, predominantly Brachiaria), Fertility (precocity and longevity), Economic Aptitude (weight gain, conformation, size, temperament, tolerance to parasites, etc.) and Racial Characteristics (birth and definitive records): ​“The objective is to obtain rustic and efficient animals, capable of producing red meat within the context of a sustainable, progressive and profitable livestock [operations], and at the same time adapted to the extension and the environment of the country.”

My brief experience at the Fazenda Novo Mundo farm seemed to confirm the possibility of Nelore cattle ​“producing red meat within the context of a sustainable, progressive, and profitable” farming operations in Brazil. It’s currently operated by Eduardo Penteado Cardoso, one of the two sons of Fernando Penteado Cardoso — a renowned Brazilian agronomist who purchased the farm with profits from the Manah fertilizer company, which he founded in the mid-1900s. The other son, Fernando, manages the fertilizer operation. 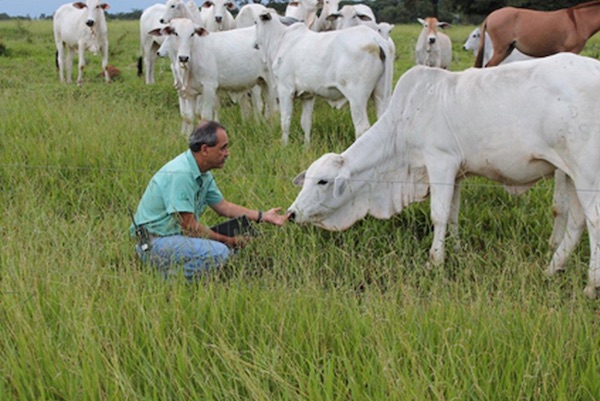 The fundamental principles of ecological and economic sustainability seem firmly entrenched in the management philosophy of this particular large farm. For example, the farm is divided into nine sections that are managed as distinct units of the ranch, which is managed as a coherent whole. I don’t recall the total number of cattle on the farm, but they are divided into groups of about 30 cows with one bull, making up distinct herds of cattle. The unique characteristics of the different herds — maturity, nutritional needs, temperament, and such — are matched with the physical characteristic of different sections of the farm. Genetic selection over time has adapted the Nelore Lemgruber cattle to the environmental conditions of Brazil and the natural environment of this particular farm.

Ecologicaly fragile areas of the farm are officially designated for natural preservation and make up about 20 percent of the total area. All streams on the farm are buffered from fields by natural vegetation. Animals are selected for parasite and disease resistance and are managed to minimize the use of pesticides that might threaten wildlife or diminish biodiversity on the farm. Eduardo indicated to me that he would not attempt to farm any of the protected areas even if he were allowed to do so. In other words, the farming operation is designed accommodate the natural ecology of the farm.

The Fazenda Novo Mundo farm focuses primarily on production of breeding stock for other Brazilian farmers who produce finished cattle for sale as beef. Eduardo recognizes the connection of soil health to the health of the grass, health of the cattle, and ultimately the health of people who eat the meat. The meat from Nelore cattle tends to be very lean and presumably has the health benefits typically associated with lean, grass-finished beef. Less than one-third of Brazilian beef cattle are currently fed grain prior to slaughter.

It may be necessary to feed some grain to produce meat that is widely acceptable in global markets, but care could be taken to avoid compromising the unique flavor and health benefits of grass-fed beef. Cattle can be fed limited grain in an open-lot setting without incurring all of the inherent problems of large intensive, industrial feedlots. We consumers need to refine our taste preferences to appreciate healthful foods rather than ask producers to compromise the healthfulness of foods to fit our unhealthy food preferences.

Eduardo talked of managing the farm as a whole living system. He stressed that the primary function of the farm is to use grass to capture solar energy which the cattle then transform into high quality, marketable meat products. The farming system is ecologically regenerative in that it uses the Brachiaria grass to sequester carbon and maintain soil fertility. Another large farm corn/​soybean farm we visited in the area has grazed Brachiaria to increase soil organic matter from less than one percent to more than four percent. The grass can be inter-seeded with corn and soybeans and grazed after the crop is harvested. Eduardo uses this process to reestablish his pastures every ten years or so. He feeds the corn or soybeans to small batches of cattle which he slaughters to check the performance of prodigy from his breeding stock.

The farm seemed to be economically viable as well as ecologically sound. It is socially responsible in the sense that it is providing the opportunity to produce a healthful, nutritious food product. I don’t know whether it is socially sustainable from the perspective of the people who work on the farm, including the cowboys who look after the various herds on a day-to-day basis. As a grateful guest, I didn’t want to ask any potentially offensive questions regarding working conditions on the farm or how well the workers were paid. Regardless, the social and cultural context of a farm would need to be considered in assessing its social integrity.

The basic ecological principles of holism, diversity, and interdependence were readily apparent on this large farm. It has little of the specialization, standardization, or routinization that characterize most large, industrial farming operations. It is not unsustainable even though it is big, because it is not big because it is unsustainable. From a personal perspective, I enjoyed visiting with my hosts, over good food and drinks, in a beautiful setting. 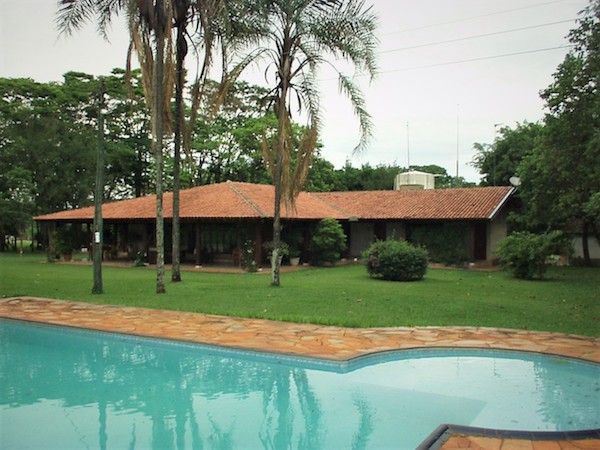 (​”Can a Big Farm Be Sustainable?” was originally published on John Ikerd’s website and is shared on Rural America In These Times with permission. To learn more about Ikerd’s books, speaking engagements and decades of work in sustainable agriculture, click here.)

John Ikerd was raised on a small dairy farm in southwest Missouri. He received his BS, MS, and Ph.D. degrees in agricultural economics from the University of Missouri. After working in private industry, he spent 30 years in various professorial positions at North Carolina State University, Oklahoma State University, University of Georgia and the University of Missouri before retiring in early 2000. He now spends most of his time writing and speaking on issues related to sustainability with an emphasis on economics and agriculture. He currently resides in Fairfield, Iowa and is the author of several books including Essentials of Economic Sustainability, Sustainable Capitalism, A Return to Common Sense and Crisis and Opportunity: Sustainability in American Agriculture and A Revolution of the Middle.
Have thoughts or reactions to this or any other piece that you'd like to share? Send us a note with the Letter to the Editor form.
More articles by John Ikerd
Rural America
Can the Corporate Takeover of Dairy Farms be Stopped?
Rural America
Land Trusts Are a Step Toward a Step Toward a Sustainable Future for Agriculture
Rural America
The Three “Great Separations” that Unravelled Our Connection to Earth and Each Other
Similar articles
LaborRural America
Meatpacking Workers Say Attendance Policies Force Them to Work With Covid-19 Symptoms
As the pandemic rages, punitive attendance policies at corporate meat plants coerce sick workers into showing up, according to activists, experts and the workers themselves.
Heather Schlitz
Rural America
For Decades the U.S. Punished Indigenous Healers. Now the Indian Health Service Wants to Hire Them
Sydney Akridge
Rural America
Another Disease Outbreak Threatens U.S. Pigs, But Big Ag Would Rather Talk About Bacon Prices
Martha Rosenberg
Join our newsletter
Fearless journalism, emailed straight to you.
Subscribe and Save 66%