Land Claims: An Indigenous People’s History of the United States

With a large part of Indigenous nations’ territories and resources in what is now the United States taken through aggressive war, outright theft, and legislative appropriations, Native peoples have vast claims to reparations and restitution. Indigenous nations negotiated numerous treaties with the United States that included land transfers and monetary compensation, but the remaining Indigenous territories have steadily shrunk due to direct federal appropriation by various means as well as through government failure to meet its obligation to protect Indigenous landholdings as required under treaties. The U.S. government has acknowledged some of these claims and has offered monetary compensation. However, since the upsurge of Indian rights movements in the 1960s, Indigenous nations have demanded restoration of treaty-guaranteed land rather than monetary compensation.

Native Americans, including those who are legal scholars, ordinarily do not use the term ​“reparations” in reference to their land claims and treaty rights. Rather, they demand restoration, restitution or repatriation of lands acquired by the United States outside valid treaties. These demands for return of lands and water and other resource rights illegally taken certainly could be termed ​“reparations,” but they have no parallel in the monetary reparations owed, for example, to Japanese Americans for forced incarceration or to descendants of enslaved African Americans. No monetary amount can compensate for lands illegally seized, particularly those sacred lands necessary for Indigenous peoples to regain social coherence. One form of Native claim does seek monetary compensation and might provide a template for other classes. Of the hundreds of lawsuits for federal trust mismanagement that Indigenous groups have filed, most since the 1960s, the largest and best known is the Cobell v. Salazar class-action suit, initially filed in 1996 and settled in 2011. The individual Indigenous litigants, from many Native nations, claimed that the U.S. Department of the Interior, as trustee of Indigenous assets, had lost, squandered, stolen and otherwise wasted hundreds of millions of dollars dating back to the forced land allotment beginning in the late 1880s. By the end of 2009, it was clear that the case was headed for a decision favoring the Indigenous groups when the lead plaintiffs, representing nearly a half-million Indigenous individuals, accepted a $3.4‑billion settlement proposed by the Obama administration. The amount of the settlement was greater than the half-billion dollars that the court would likely have awarded. However, what was sacrificed in the settlement was a detailed accounting of the federal government’s misfeasance. As one reporter lamented: ​“The result will see some involved with the case, especially lawyers, become quite rich, while many Indians – the majority, in all likelihood – will receive about a third of what it takes to feed a family of four for just one year.”

Another important form of reparations is the repatriation of remains of dead ancestors and burial items. After considerable struggle on the part of Indigenous religious practitioners, Congress enacted the Native American Graves Protection and Repatriation Act of 1990 (NAGPRA), which requires that museums return human remains and burial items to the appropriate Indigenous communities. It is fitting that Congress used the term ​“repatriation” in the act. Before NAGPRA, the federal government had used ​“repatriation” to describe the return of remains of prisoners of war to foreign nations. Native American nations are sovereign as well, and Congress correctly characterized the returns as repatriations.

Although compensation for federal trust mismanagement and repatriation of ancestral remains represent important victories, land claims and treaty rights are most central to Indigenous peoples’ fight for reparations in the United States. The case of the great Sioux Nation exemplifies the persistence among Indigenous nations and Communities to protect their sovereignty and cultures. The Sioux have never accepted the validity of the U.S. confiscation of Paha Sapa, the Black Hills. Mount Rushmore is controversial among Native Americans because it is located in the Black Hills. Members of the American Indian Movement led occupations of the monument beginning in 1971. Return of the Black Hills was the major Sioux demand in the 1973 occupation of Wounded Knee. Due to a decade of intense protests and occupations by the Sioux, on July 23, 1980, in United States v. Sioux Nation of Indians, the U.S. Supreme Court ruled that the Black Hills had been taken illegally and that remuneration equal to the initial offering price plus interest — nearly $106 million — be paid. The Sioux refused the award and continued to demand return of the Black Hills. The money remained in an interest-bearing account, which by 2010, amounted to more than $757 million. The Sioux believe that accepting the money would validate the U.S. theft of their most sacred land. The Sioux Nation’s determination to repatriate the Black Hills attracted renewed media attention in 2011. A segment of the PBS NewsHour titled ​“For Great Sioux Nation, Black Hills Can’t Be Bought for $1.3 Billion” aired on Aug. 24, 2011. The reporter described a Sioux reservation as one of the most difficult places in which to live in the United States:

Few people in the Western Hemisphere have shorter life expectancies. Males, on average, live to just 48 years old, females to 52. Almost half of all people above the age of 40 have diabetes. And the economic realities are even worse. Unemployment rates are consistently above 80 percent. In Shannon County, inside the Pine Ridge Reservation, half the children live in poverty, and the average income is $8,000 a year. But there are funds available, a federal pot now worth more than a billion dollars. That sits here in the U.S. Treasury Department waiting to be collected by nine Sioux tribes. The money stems from a 1980 Supreme Court ruling that set aside $105 million to compensate the Sioux for the taking of the Black Hills in 1877, an isolated mountain range rich in minerals that stretched from South Dakota to Wyoming. The only problem: The Sioux never wanted the money because the land was never for sale.

That one of the most impoverished communities in the Americas would refuse a billion dollars demonstrates the relevance and significance of the land to the Sioux, not as an economic resource but as a relationship between people and place, a profound feature of the resilience of the Indigenous peoples of the Americas.

Excerpted from An Indigenous Peoples’ History of the United States by Roxanne Dunbar-Ortiz (Beacon Press, 2015). Reprinted with permission from Beacon Press. 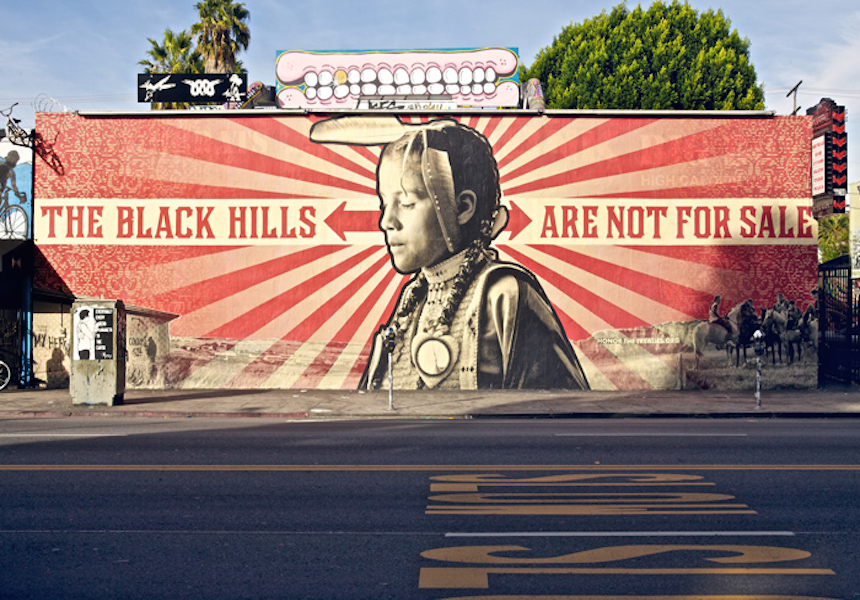 On Melrose Avenue in Los Angeles, California, artists Aaron Huey and Shepherd Farley designed a mural to draw attention to ongoing violations of the Fort Laramie treaties — agreements between the U.S. government and Lakota people signed in 1851 and 1868. (Photo: Eric Becker / obey​giant​.com)

See the options
Roxanne Dunbar-Ortiz grew up in rural Oklahoma, the daughter of a tenant farmer and part-Indian mother. She has been active in the international Indigenous movement for more than four decades and is known for her lifelong commitment to national and international social justice issues. After receiving her PhD in history at the University of California at Los Angeles, she taught in the newly established Native American Studies Program at California State University, Hayward, and helped found the Departments of Ethnic Studies and Women’s Studies. Her 1977 book The Great Sioux Nation was the fundamental document at the first international conference on Indigenous peoples of the Americas, held at the United Nations’ headquarters in Geneva. Dunbar-Ortiz is the author or editor of seven other books, including Roots of Resistance: A History of Land Tenure in New Mexico. She lives in San Francisco.
Have thoughts or reactions to this or any other piece that you'd like to share? Send us a note with the Letter to the Editor form.
More articles by Roxanne Dunbar-Ortiz
Viewpoint
The Colonial Roots of Gun Culture
The origins of the U.S. gun obsession lie in the violent dispossession of Native Americans.
Similar articles
ViewpointRural America
Beware the Corporate Appropriation of “Sustainable” Farming Practices
Long-standing methods of agroecology can feed people, restore ecosystems and transform our food system—but not if agribusiness hollows them out.
Philip A. Loring
Rural America
Tribal Court Case Against Line 3 Pipeline Is First to Invoke “Rights of Nature”
The suit by the White Earth Band of Ojibwe says Enbridge's pipeline would violate the rights of wild rice, which the tribe enshrined in law in 2018.
Alex Brown
Rural America
Growing Food in Self-Defense
For years, Black folks in this small South Carolina town have tended gardens and raised animals to build personal resilience and protect their culture.
Gillian Richards-Greaves
Join our newsletter
Fearless journalism, emailed straight to you.
Subscribe and Save 66%