Muckraking and Troublemaking: 40 Years of In These Times

Investigative journalism and what it means to rake muck. 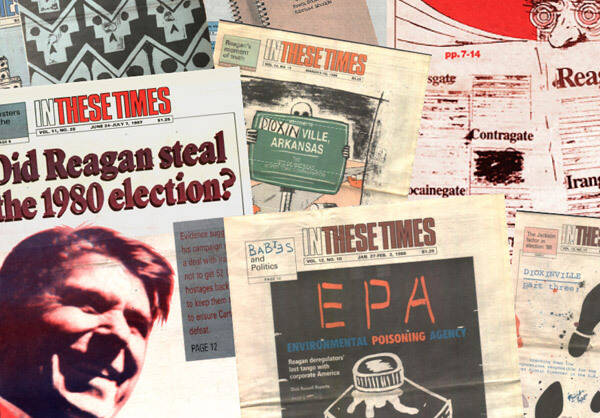 In the 1980s, In These Times published a three-part series about dioxin contamination in Jacksonville, Ark., a story about how the corporation that murdered Karen Silkwood created a 9-legged frog and dozens of stories about the Iran-Contra affair.

The best inves­tiga­tive jour­nal­ism trou­bles the pow­er­ful — and In These Times has been busy mak­ing trou­ble for 40 years now.

In These Times has remained committed to its founding belief that a crusading press, working alongside an informed public, can create change—but only if it’s willing to look honestly, and unsparingly, at the root cause of problems.

At the turn of the 20th century, Teddy Roosevelt accused pioneering investigative reporters who were chronicling horrific labor conditions, racial violence and unsafe housing of focusing too much on the negative. Quoting a passage from John Bunyan’s 1678 novel The Pilgrim’s Progress, Roosevelt compared them to “the man who could look no way but downward with the muck-rake in his hands.”

Investigative journalists have since worn the badge of “muckrakers” proudly, and at In These Times, it’s a label that suits us just fine. The journalists who have worked here understand that it’s in the muck that the truth is often buried.

ITT has always been willing to dig into stories that the mainstream media ignored—perhaps due to ideological blinders, or corporate pressure, that keep them from looking “downward” at how the actions of governments and corporations impact marginalized communities. By continually raising this question, In These Times arrived first to the scene of some of the most controversial and contested stories of the past four decades—and caused no end of trouble for people in high places.

It was during the Reagan administration that In These Times’ investigative reporting came into its own. ITT dogged Reagan throughout the 1980s. At the height of the Iran-Contra affair, the paper had reporters in more than half a dozen countries chasing leads. Over a four-year period, it published dozens of articles connecting the threads of various programs through which the Reagan administration, circumventing Congress, channeled funds to paramilitary groups attempting to overthrow the elected government of Nicaragua. That included Vince Bielski and Dennis Bernstein’s December 1986 story, which pieced together the outlines of what became a major scandal for the Reagan administration: that the Contras were involved in trafficking cocaine into the United States.

Investigative reporting at ITT reached the next level under Sheryl Larson, who joined the staff in 1982. Larson was managing editor for 12 years, and under her guidance reporters broke dozens of stories, including a three-part series on the chemical contamination of a small Arkansas community—at the time, the worst hazardous waste incident in the history of the United States. The residents of three neighborhoods that bordered a former chemical plant in Jacksonville, Ark., had been exposed to dioxin, one of the most lethal substances ever produced. In These Times revealed how the EPA botched the clean-up and how chemical companies attempted to dodge responsibility after years of dumping toxic waste at the site.

Over the years, ITT has waded into the muck time and again to investigate environmental devastation and workplace abuses—issues that other outlets often regard as undeserving of journalistic rigor. In a February 2013 cover story, Spencer Woodman documented the effects of a decade of cuts to the state agencies that enforce minimum wage and overtime laws, which left employers in many states essentially free to underpay their workers without consequences. Woodman told the story of Anthony Van Buren, a 59-year- old contractor who sought help from Virginia’s Department of Labor and Industry in recovering $1,000 he said his employer had never paid him for a painting job. Instead, the department told Van Buren that it was unable to take new cases, and he would have to prosecute his employer himself. The investigation helped draw attention to a national epidemic of wage theft. Soon after, Virginia restored funding for wage-and-hour investigators.

In January 2014, In These Times entered a new era when it partnered with Chicago attorney Leonard C. Goodman to create the Goodman Institute for Investigative Reporting. Through the institute, ITT has expanded its investigative operation, providing journalists with the resources to pursue under-reported stories, and freedom from the influence of advertisers, corporate entities and governmental pressure. The first Goodman story, an investigation by Stephanie Woodard into how Native Americans are systematically disenfranchised, won a “Best Feature” award from the Native American Journalists Association. In March 2015, the Department of Justice took the rare step of drafting legislation that would help reduce barriers facing Native voters.

Since then, In These Times has published investigative pieces on the U.S. role in the Central American migrant crisis, the revolving door between the government and the chemical industry, police surveillance of activists, inhumane treatment of pregnant mothers in prison, the devastating effects of the lack of paid family leave and more.

Sometimes the truth is hiding in plain sight. Just last month, Seth Kershner revealed that the Obama administration’s so-called freeze of military equipment transfers to police forces was anything but, simply by calling the right official and asking how much gear was still making its way into the hands of local law enforcement.

But often it takes much more digging. Earlier this year, Stephanie Woodard spent months earning the trust of the families of Native Americans who have been killed by police. Her investigation shed light on a wave of police killings that few in the media have bothered to report. That kind of story takes time and money—two things in shorter and shorter supply in today’s media environment. And then there’s the risk.

Writer and activist Abbie Hoffman once met with Richard Allen, Reagan’s national security adviser, after writing a 1988 Playboy story about the October Surprise—the alleged arms-for-hostages deal that Reagan cut with Iran in order to win the 1980 election. ITT had written about this theory the previous year, and according to Hoffman, Allen boasted, “If we wanted we could have blown In These Times right out of history. But why make them famous?”

Increasingly, the real threat is not just governments, but corporations and wealthy individuals who can use money and lawsuits not just to intimidate publications, but to snuff them out. It’s a crisis in journalism that has implications far beyond the industry.

To some, a publication that began as a socialist newspaper and has never tried to hide its political viewpoint may seem like an unlikely home for investigative reporting. But in truth, all investigative journalism has an agenda. Mary Heaton Vorse, a novelist who took up labor journalism after participating in a 1912 textile strike, explained her objective plainly: “I wanted to see wages go up and babies’ death rate go down.” In These Times has remained committed to its founding belief that a crusading press, working alongside an informed public, can create change—but only if it’s willing to look honestly, and unsparingly, at the root cause of problems.

It’s that willingness to look, and to question both government and corporate power, that has helped set In These Times apart. At the 1987 Investigative Reporters and Editors conference in Phoenix, Ariz., during a panel on the mainstream media’s failure to report on the Iran-Contra scandal earlier, New York Times editor Joel Brinkley posed the question to participants: “Why did the press, and the public, and Congress have all this information and just sort of let it slip through their fingers?”

Maybe they were just afraid to make trouble.

IN THESE TIMES ENCOURAGES journalists to submit investigative story proposals to the Leonard C. Goodman Institute for Investigative Reporting. The next deadline is January 2017. To learn more and to submit a proposal, visit inthesetimes.com/investigative.

Christo­pher Hass is the exec­u­tive pub­lish­er of In These Times. Before join­ing ITT, he spent eight years work­ing on polit­i­cal and advo­ca­cy cam­paigns, includ­ing both the 2008 and 2012 Barack Oba­ma pres­i­den­tial cam­paigns. He is also the for­mer edi­tor and pub­lish­er of P8NT Mag­a­zine.

Have thoughts or reactions to this or any other piece that you'd like to share? Send us a note with the Letter to the Editor form.
More articles by Christopher Hass
Tonight at 8:00 p.m. ET: Join Bernie Sanders and Sara Nelson for a special online event
We’re moving our anniversary celebration online—and making it free for everyone.
Feature
The DNC Debate Rules Are Turning Small Donors Into a Racket
The new rules are an invitation—and maybe even a requirement—for candidates to buy their way onto the stage.
Feature
A Different Way of Doing Journalism
As an independent nonprofit, we’re answerable to our readers and no one else.
Similar articles
Feature
How Bernie Sanders Put Socialism to Work in Burlington: A Profile from 1983
Sanders sailed to reelection as mayor of Burlington after transforming supposedly conservative issues into left victories, and helping democratize city government. In this 1983 profile, Sanders delves into why he believes “the word ‘socialism’ has value” and “politics is not dissimilar to art.”
David Moberg
Feature
The Robots Are Coming. Whether They’ll Be Job Terminators or Job Transformers Is Up to Us.
Don't fear the robot.
David Moberg
Feature
At Colleges, Running Backs Get All the Greenbacks, While Academic Students Fight Over Crumbs
College football has become a bloated, multi-million dollar business, subverting the original mission of universities—education.
Gilbert M. Gaul
Subscribe to our free newsletter
Fearless journalism that speaks truth to power
Limited Time: