An Oil Worker & a Union Staffer Explain Why 1,000s of Oil Workers Across the Country Are On Strike

Oil workers in multiple states around the country, as In These Times has reported over the last two weeks, are on strike for the first time in a decade. One of the central locations for this strike has been California, where workers at multiple locations have been on the picket line.

Jim Payne is financial secretary of United Steelworkers Local 5, the union for oil workers in northern California, including the struck Tesoro Golden Eagle Refinery. Tracy Scott is a rank-and-file worker at the refinery, currently on leave to work for the local as a staff representative.

How did the strike come about and what are the issues the union is striking over?

Payne: The companies had been making economic proposals, but they weren’t addressing any of our proposals on fatigue risk management, contractor facility maintenance or health and safety. They were also unwilling to accept our ​“no retrogression” clause, which has been in our contracts for years. That clause protects our language about successorship, safety, plant closures, layoffs and rate retention. We’re just not willing to go backwards on those things.

In the last hour before the contract expired, the company walked away from the table and was unwilling to continue talking. It left our national leaders no choice but to start the strike at nine locations nationwide, and this past Saturday at a couple of other locations as well.

We’re striking three Tesoro refineries on the west coast, the Shell Deer Park refinery and chemical plant are out, three Marathon plants are out and one LyondellBasell. Now two BP plants have been added. They’re definitely the ones with all the resources. It’s been 35 years since we’ve been on strike, so we don’t take strikes lightly. But sometimes you’ve got to do what you’ve got to do.

It feels a lot like David and Goliath. They continue to operate their plants, although not as safely and efficiently as when our members are operating them. They’re still making money, even though our folks aren’t in there.

You’re a worker at the refinery here, Terry. What does it mean to be on strike?

Scott: I’ve been an employee since 2000. I was an operator in a hydro processing unit. We basically process feed stock and take the nitrogen, sulfur and metals out of it. Then it goes to a ​“cat cracker,” which turns it into gasoline and other components.

Striking means facing all the hardships any family would expect to see without a job. As a union, we tell our members to save and be prepared. We have a really young workforce, though, and they’re not as much into saving as they are into living, so that concerns us. But we have a strike and defense fund that will help those who need it to get through this. We’re doing pretty well right now. 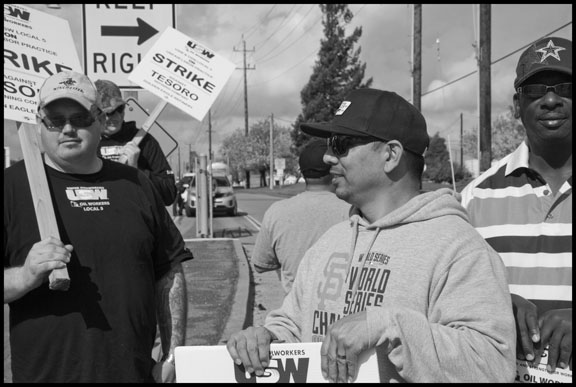 Payne: Any time we serve strike notice, we offer the company a safe and orderly shutdown. Tesoro here accepted the offer, so we negotiated a process and then took the plant down sequentially. The company is still operating portions of the plant as a terminal, taking product in and sending product out. But they’re not manufacturing any product.

Golden Eagle is the only one shut down this way. Tesoro Anacortes and Tesoro Carson are still operating. We made sure we were striking over unfair labor practices. Because of that the company can’t replace our folks permanently. But they can replace us on a temporary basis, and at all the other ten locations management is continuing to operate the plants.

What does ​“no retrogression” mean, and how does it affect rank and file workers?

Payne: The most important agreement that’s covered in our ​“no retrogression” language is successorship. That means that if a facility is sold, it’s sold with a contract and the new owner has to honor it. Without that language, the new owner wouldn’t have to hire the employees at that location. We’ve had a number of locations sold over the past years. I can imagine how bad it would have been if that language hadn’t been there. The Tesoro refinery itself was sold several times. The last two times it was sold with the successor language in place, so the contract went with it.

Scott: Having gone through three separate owners, it’s extremely important that we’re protected in those events. The fact that the companies haven’t wanted to put ​“no retrogression” on the table is pretty telling about where they’re coming from. Based on my own union involvement, without the protections of the successorship language, chances are I wouldn’t be there. 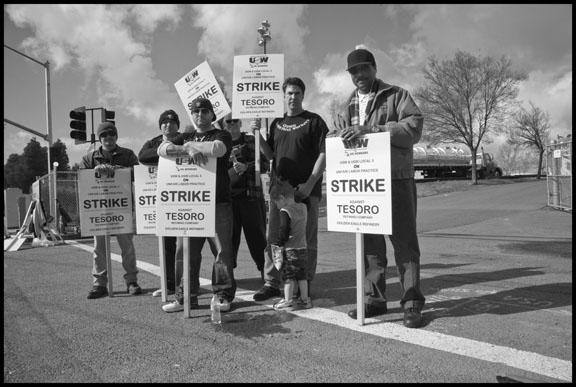 In the Bay Area in the last 35 years since the last strike, we’ve seen a number of industrial accidents, some of them pretty horrifying. What does the health and safety language in the contract mean in terms of the actual safety of people on the job in the refineries and in the communities around them?

Payne: One of our current proposals is on fatigue risk management. We agreed three years ago to adopt the American Petroleum Institute recommended practice #755, which lays out a maximum number of days and hours. But companies manipulate the schedule to take advantage of exceptions in these recommendations. If a refinery is well-staffed, meeting those standards isn’t that difficult. But when you have a company running with a skeleton crew, it’s harder.

So when they start manipulating people’s schedules to meet an arbitrary guideline, it creates even more fatigue for them. When they had the explosion in Texas City, the Baker panel report said fatigue was one of the factors that led to it. A lot of things that go wrong in this industry can be connected to fatigue.

Scott: We’ve been after the industry around health and safety since forever. This time we put out some really serious proposals and we find it difficult to accept that the companies only want to address the financial portion of the contract. Yes, everybody wants better wages, but our intent was to negotiate for a safer workplace this time. Most of the companies’ responses made no change. In essence they were just words on a sheet of paper that will have no effect out in the workplace.

How do the companies’ contracting out practices affect health and safety in the refinery?

Payne: We get a lot of specific training on what we do out there. Contractors can be working in one place one day, and then in another area the next. They get only a basic level of training to come into the refinery. Over the years the companies have compensated for the attrition of the USW membership by backfilling with contractors. The level of training has obviously dropped off because of that. Where the companies have contractors who have been on the job a year or more, we want them to fill these positions through company hires. Relying on a better trained proprietary employee would give us better plant safety.

We actually had two incidents [occur] in a relatively short period of time. Two proprietary employees were burned with acid, and a month and a half later the same thing occurred with contractors. The company cancelled a safety program in the years before. We’ve seen the health and safety regulatory data, and the numbers are going up. A safer work environment for our members dovetails with what’s provided for the community. If the frontline workers are safe, then the community is safe. I think the community appreciates that, and it’s why we’ve had people coming out and supporting us. 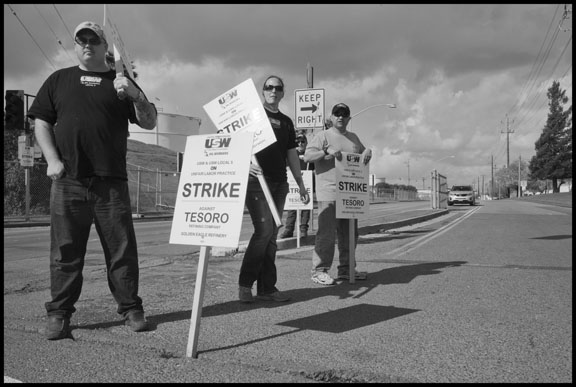 In the Bay Area the refineries are all located in the middle of urban areas with lots of people living around them.

Payne: If I were living in those communities and our language protections were stripped away I’d be concerned. We’re seeing a lot of environmental and community organizations on the picket lines, but I don’t think the general public has as good a grasp on our issues. Most people assume that workers go on strike for more money. But here money isn’t really the issue here. We have letters of agreement that provide health and safety reps and other programs that have made things safer. Without the ​“no retrogression” provision in the contract those could all go away.

Tracy, how are you participating in the local negotiations? As a rank-and-file worker, can you bring in your experience of these health and safety issues?

Scott: I get time off from work to participate. Our contract provides leave for people to do this, up to a year at a time, with extensions. Health and safety is where it starts for us, but on a local level we’re not talking about the policy questions that have us out on strike, and at the national table the companies aren’t even giving them serious consideration. They just want these issues to go away. But it’s not the ​’60s and ​’70s anymore, and we’re not going for it. We all go to work to make a living, but in making a living we all want to come home. 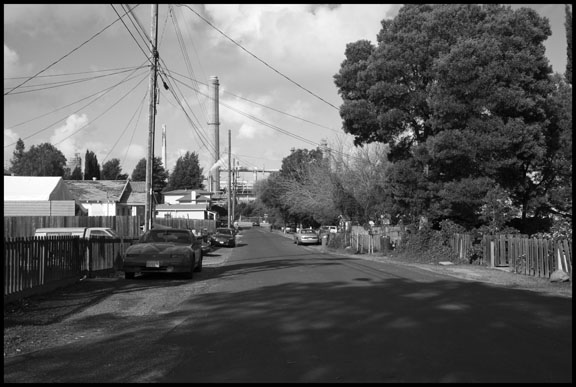 David Bacon is a writer, photographer and former union organizer. He is the author of The Right to Stay Home: How US Policy Drives Mexican Migration (2013), Illegal People: How Globalization Creates Migration and Criminalizes Immigrants (2008), Communities Without Borders (2006), and The Children of NAFTA: Labor Wars on the US/​Mexico Border (2004). His website is at dba​con​.igc​.org.
Have thoughts or reactions to this or any other piece that you'd like to share? Send us a note with the Letter to the Editor form.
More articles by David Bacon
Labor
Hundreds of Fruit Packing Workers Are On Strike
Labor
Don’t Punish the Dreamers—Punish the Corporations Driving Forced Migration
Labor
40,000 AT&T Workers Begin 3-Day Strike
Similar articles
Labor
Puerto Rico’s Major Newspapers Laid Off Reporters Just When the Island Needed Them the Most
Katherine Braden
Labor
An Oakland Coal Terminal Is Officially Stalled—Thanks To a Labor-Environmental Alliance
Sarah Lahm
Labor
Domestic Workers Form Historic Partnership With AFL-CIO
Kari Lydersen
Join our newsletter
Fearless journalism, emailed straight to you.
Subscribe and Save 59%