The fight for reproductive justice is about to get harder, and now is no time for complacency. 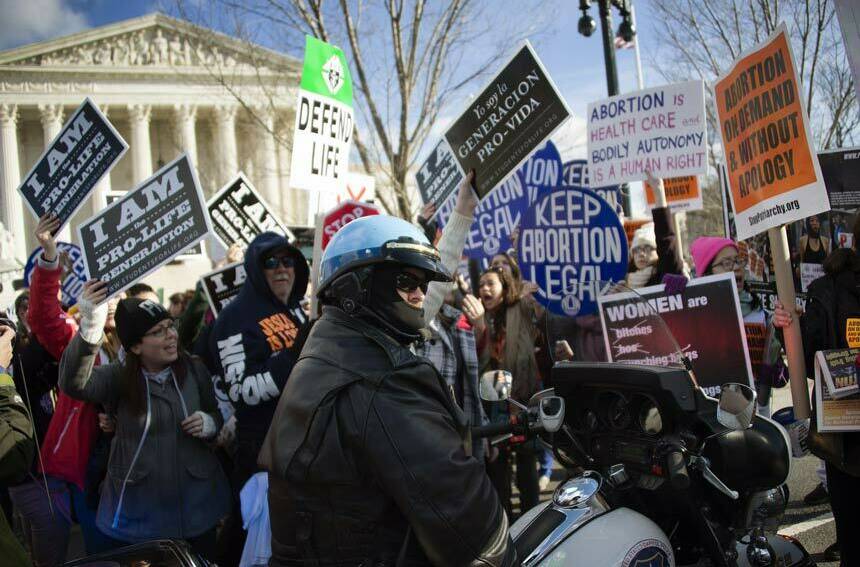 Pro- and anti-abortion protestors face off in front of the Supreme Court on Roe's 42nd anniversary. (Jim Watson/AFP/Getty Images)

In the end, the fight for Roe v. Wade may be lost because no one under­stood we were fight­ing it.

First, a disclaimer: We don’t know that Roe will be over- turned under Trump. Even when he inevitably names an anti-choice extremist to replace Antonin Scalia, the court will likely maintain a slim pro-choice majority. As FiveThirtyEight chirpily assures us in an article titled “Trump Probably Can’t Get Roe v. Wade Overturned,” Trump would need at least two, maybe three, vacancies to change the math.

This sort of complacency was everywhere this election, from debate moderators who refused to ask about abortion to media outlets who were more interested in e-mail servers and Trump tweets than reproductive rights policy. In an interview with Rolling Stone, Bernie Sanders cast abortion as a “social issue” separate from the economic ones at the center of his campaign; in another instance, he called Planned Parenthood—a crucial provider of reproductive healthcare for low-income patients—part of “the establishment” he opposed.

This recalls a long history of the Democratic Party, as well as many progressive organizations, putting reproductive rights on the back burner to avoid being “divisive.” Even when the focus is on seizing the means of production, the means of preventing reproduction is of pressing economic concern for women and trans people. Poor women are three times more likely than middle-class or rich women to suffer an unintended pregnancy, largely due to lack of contraception access. They are less able to afford an abortion (up to $1,500) or a child (at least $12,800 per year). They are the most penalized by new abortion restrictions, which increasingly require them to travel long distances and take time off work. But downgrading the single biggest financial decision in many people’s lives to a peripheral “social” problem is the sort of unforced error that leads feminists to develop a cordial loathing for mainstream liberalism and would-be socialism alike.

The end of reproductive choice is not likely to happen all at once. Affordable access to birth control and emergency contraception will likely go first, through the dismantling of Obamacare and the defunding of Planned Parenthood. Some reproductive justice advocates expect choice to end not through the Supreme Court but through a “fetal personhood” amendment, which would require ratification through the states. So our first act of resistance should be cutting checks to Planned Parenthood and to EMILY’s List, which elects pro-choice politicians at the state level.

Whether or not Roe is overturned, we can expect the continued erosion of abortion rights through shorter term limits for legal abortion—on Dec. 6, 2016, Ohio passed a “hearbeat bill” that would effectively ban abortions after just six weeks—and longer “waiting periods” that make it harder to get abortions in that timeframe.We can expect to see more outright punitive measures and cases like Tennessee’s Anna Yocca, who attempted to self-abort at 24 weeks and has spent the past year jailed and facing felony charges.

Thus, in the Trump era, organizers may also find it neces-sary to recreate resistance networks like the Jane Collective, which formed in 1969, when abortion was actively illegal. Jane members discreetly ferried women to safe abortion providers; initially, the network started with one woman who knew such a provider, whose phone number was passed around to others. In time, it grew to a larger group whose members were frequently educated about how to perform safe, surgical abortions themselves.

You may notice that what I propose is a large, expensive, occasionally illegal infrastructure. That’s true. The cheap, legal, low-effort infrastructure provided under Roe may disappear within our lifetimes. That brings us to the final steps we must take in our new reality: Shun complacency about reproductive justice and any pundits who preach it. A 40-year war on reproductive rights is drawing to a close, and we may well lose. The least we can do is acknowledge we’re fighting for our lives.

Sady Doyle is an In These Times con­tribut­ing writer. She is the author of Train­wreck: The Women We Love to Hate, Mock, and Fear… and Why (Melville House, 2016) and was the founder of the blog Tiger Beat­down. You can fol­low her on Twit­ter at @sadydoyle.
Have thoughts or reactions to this or any other piece that you'd like to share? Send us a note with the Letter to the Editor form.
More articles by Sady Doyle
Labor
The Parent Trap
Culture
How Capitalism Turned Women Into Witches
Sylvia Federici’s new book explains how violence against women was a necessary precondition for capitalism.
Culture
Serial Misogyn-Neigh: The New “BoJack” Explores How We Let Famous Men, And Horses, Off the Hook
Season five of BoJack Horseman turns a critical eye on its characters and itself.
Similar articles
ViewpointRural America
Healthy Food Comes from Healthy Land, Not from Laboratories
Manufactured meat substitutes do nothing to restore the ecosystems and rural communities ravaged by industrial agriculture.
Will Harris
Viewpoint
Our Biden Problem
Movements face a challenge: how to oust Trump while still combatting Biden's neoliberalism.
Barbara Ransby
Viewpoint
Corporations Are Not Letting This Crisis Go to Waste
As the pandemic wreaks chaos, corporations and the GOP are following the shock doctrine playbook.
Jeremy Mohler
Subscribe to our free newsletter
Fearless journalism that speaks truth to power
Limited Time: