Slaughterhouses employ a half-a-million workers in more than 7,000 facilities across the U.S., and 38 percent are classified by the Bureau of Labor Statistics as ​“butchers and other meat, poultry, and fish processing workers.”

While these jobs are available across the country, the largest employers operate facilities with thousands of employees in rural areas, what the BLS refers to as ​“nonmetropolitan areas.” 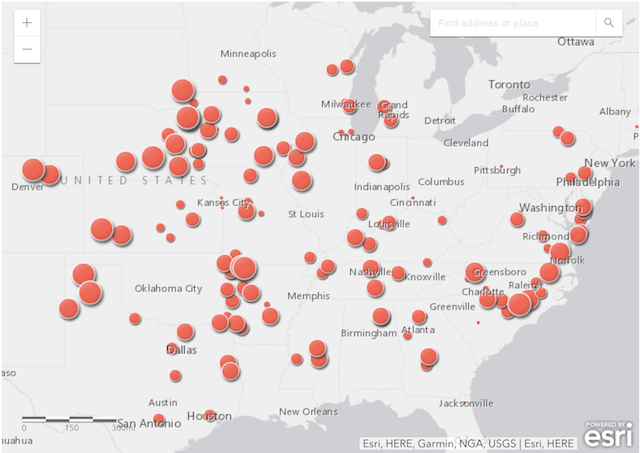 Slaughterhouse work is one of the top employment sources in Southeast North Carolina — far higher than in other parts of the country (location quotient), and slightly better paying.

(This article was originally published on Investigate Midwest. To view the maps and graphics interactively visit the original article, ​“Slaughterhouses provide low, yet stable floor for employment in rural America”.)
Be a Sustainer

See the options
Christopher Walljasper is an investigative reporter and audio producer in Chicago and across the Midwest. He has covered a variety of issues, including rural America, business, technology, real estate and national security.
Have thoughts or reactions to this or any other piece that you'd like to share? Send us a note with the Letter to the Editor form.
More articles by Christopher Walljasper
Rural America
New Trump Budget Proposes Big Cuts to Crop Insurance and Emergency Aid to Farmers
Rural America
Food Production is a Major Cause of Climate Change, but Farmers Can be Part of the Solution
Similar articles
ViewpointRural America
How to Live with the New Predator that Stalks the West
Unwilling to share the landscape with grizzlies, wolves and other predators, the U.S. exterminated most of them. With wildfire, we don’t have that option.
Pepper Trail
FeatureRural AmericaThe Wisconsin Idea
In Dairy Country, a Network of Hmong and Latino Workers Fight Covid-19
Dairy production in Wisconsin relies on immigrant labor, a contradiction in a state that has seen the rise of nativist, anti-immigrant politics.
Esther Honig
Rural America
The U.S. Still Uses Dozens of Hazardous Pesticides Banned in Other Countries
Phorate, for example—the “extremely hazardous” insecticide that is most used in the U.S.—is banned in 38 countries, including China, Brazil and India.
Pramod Acharya
Join our newsletter
Fearless journalism, emailed straight to you.
Subscribe and Save 66%