Sitting in the audience was like watching blood dry—a convergence of the compellingly grotesque and the mind-numbingly boring.

Donald Trump held a private party disguised as campaign event on January 7 in a 1,400-seat theater in in Burlington, Vt. Sitting in the audience was like watching blood dry — a convergence of the compellingly grotesque and the mind-numbingly boring. Grotesque, I had expected, but having seen clips of Trump, I anticipated being entertained by his clownish braggadocio and fact-challenged hyperbole.

On the rare occasions Donald Trump referred to actual policy or politics, he created an alternative universe in which he held, or deserved, the starring role.

No such luck. The rambling, disjointed speech he burbled in the heart of Bernie’s base was a exercise in dull, smug narcissism. Like a kitten distracted by a shiny object, Trump rambled from point to point. His only unifying themes were bullying, bullshit and boast. The bullying was aimed at people either too politically weak (refugees and immigrants) or too distant to counter his weak-wristed slaps (every other candidate — none of whom could match to his exemplary standards of deal making, intelligence, courage, wealth, and charm).

But for his fans, the verbal effluvia fertilized their enthusiasm. And the boasts, a simulacrum of substance, formed the core of the talk. On video, the bragging seems amusingly ridiculous, but in person, mouthed by an actual human, it is strangely childish, sad, and barely coherent — like listening to lonely, beer sodden frat boys declare their drinking and sexual prowess.

Waving his arms like a stoned discus hurler, Trump referred endlessly to himself. He declared, with mock amazement that people called him ​“plainspoken.” But I went to an Ivy League School, Wharton, and have the most extensive vocabulary of any candidate. Maybe plainspoken is a compliment, he pondered. He went on to prove the point by patting himself on the back for nailing his rivals, all of them, with just the perfect word: ​“stupid.” He also crowed that he had the highest IQ of any candidate.

The crowd swallowed the red meat and spit out the facts. One attendee said she loved Trump because he represented the idea that anyone who works hard can get rich — not just people who are given things for nothing or — creating her own irony-free zone — get $1 million handed to them. (That exact sum, which Trump described as ​“a small loan” from his father, was Trump’s start-up money, later enhanced by a $40 million inheritance.) What did she think of the fact that the greatest predictor of wealth in America is parental wealth? ​“I disagree,” she replied.

On the rare occasions Trump referred to actual policy or politics, he created an alternative universe in which he held, or deserved, the starring role. The Iran deal was a negotiating disaster — Obama is the worst negotiator in the world, he declared — because America paid billions to Iran to sign. (The deal mostly freed Iran’s own frozen assets.) He would have solved the Iran negotiations by walking out of the room until the intimidated Iranians caved.

Misinformation, deception and lies marked the planning and execution of the event as well as the content. The campaign apparently feared opponents and Bernie supporters might pack the room or get tickets and boycott the show, leaving an embarrassingly empty hall. So to ensure an adequate selection of true-believers, Trump issued 20,000 online tickets— for a 1,400-seat venue. The exponential overbooking created a pre-event line that stretched for blocks. At the theater door, Trump’s minions screened the ticket holders and turned away anyone who admitted not being a supporter or even being undecided.

The ruse not only dissed his own followers, who had stood for hours in the cold, but risked sparking public disorder. After word came out regarding its massive ticket dump, the Trump camp ​“stopped returning the department’s calls,” said annoyed Burlington Police Chief Brandon del Pozo.

A secret service officer regularly detailed to campaign events across the country said he had never seen or heard of such overbooking.

The city of Burlington, less than thrilled by Trump’s high handedness and disregard for public safety, also lamented the cost to taxpayers of dealing with the circus. A spokesperson said the campaign will get a bill for the mess, but since, as Trump boasts, he runs a self-funded vanity campaign, the bill will go straight to The Donald — and presumably The Trash Bin.

Nor was the theater’s executive director delighted. He had been promised a no-sign event only to have Trump people distribute stacks of campaign signs inside the elegant old hall. ​“They lied to us,” he told VtDig​ger​.com, shaking his head, telling an assistant to not bother to try to take them back. 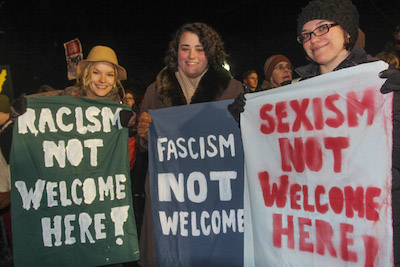 American Federation of Teachers members protest outside the Burlington, Vt., theater at which Trump was speaking. (Photo Terry J. Allen)

Meanwhile hundreds of protesters, including several state politicians, filled the street opposite the theater to chant, play music, and rally the anti-Trump and pro-Bernie forces. Anger at Trump’s fascism, racism, misogyny, and anti-immigrant and refugees attacks was blended with humor. One group, in Star Wars storm trooper garb, held aloft a large sign proclaiming ​“The Dark Side for Trump.” The Kountry Kart Deli, adjacent to the theater, offered a Donald Trump sandwich: Bologna on white bread, ​“filled with B.S. (bacon slices).”

As the evening wore on the hundreds of protesters outside were joined by the few who had made it inside, raised a ruckus, and were ejected by Trump goons. In his speech, after claiming he loved the 1st amendment as much as the 2nd, Trump informed the audience that this was a private event because he had bought and paid for the space, and protesters were not welcome. If anyone disrupts, he told the attendees, drown them by chanting ​“Trump” until security can dispose of them. Scattered outburst did indeed punctuate the talk, and while Trump at first declared himself amused, he soon turned vindictive. Throw them out, he ordered of one disruptor, but ​“confiscate” his coat.

Media were supposed to be relegated to the very back of the hall and were advised to bring extenders for their cameras. Since I lacked a massive lens or a liking for following orders, I just took a seat up front. The better to bask in Trump’s golden glow and see the show from the crowd’s perspective.

But in the end it was poor entertainment and even poorer politics. More bored than outraged, I left before the sad spectacle ended and joined the companionable assembly gathered outside.

Support In These Times
Terry J. Allen is a veteran investigative reporter/​editor who has covered local and international politics and health and science issues. Her work has appeared in the Guardian, Boston Globe, Times Argus, Harper’s, the Nation​.com, Salon​.com, and New Scientist . She has been an editor at Amnesty International, In These Times , and Cor​p​watch​.com. She is also a photographer. Her portraits of people sitting in some of the 1900 cars lined up outside a Newport, Vt., food drop can be seen on www​.flickr​.com/​p​h​o​t​o​s​/​t​e​r​r​y​a​l​l​e​n​/​a​lbums. Terry can be contacted at tallen@​igc.​org or through www​.ter​ry​jallen​.com.
Have thoughts or reactions to this or any other piece that you'd like to share? Send us a note with the Letter to the Editor form.
More articles by Terry J. Allen
Feature
Tear Gas and Pepper Spray Can Be Deadly, But the U.S. Won’t Regulate Police Use
Despite widespread use, chemical agents sold for police purposes aren't monitored by any federal agency.
Rural America
Undocumented in Vermont: The Hidden Life of a Migrant Farmworker​
Feature
Trump Can’t Follow Through on His Promises—And Will Need A Scapegoat
The more he fails to deliver on his economic pledges, the more he’ll try to shift the blame.
Similar articles
Feature
Dylann Roof’s Rhodesian, South African Flags Symbolize White Supremacy. So Does the Confederate Flag
That a racist mass murderer would embrace of the three flags should end the debates about whether or not the Confederate flag can mean anything other than racism.
Peter Cole
Feature
Amtrak’s Spectrum Gap
The main reason for the derailment? Amtrak failed to acquire broadcast rights to send automatic safety communications.
David Sirota
Feature
5 Ways To Reduce Inequality By Holding Corporations Responsible
What would happen if we returned to the philosophy that businesses should serve workers and society?
Amy Domini and Sofia Faruqi
Join our newsletter
Fearless journalism, emailed straight to you.
Subscribe and Save 66%