Warning! You Are Being Watched 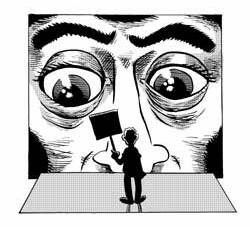 Share Tweet Copy Link Email Print
Published in
October 13, 2003
In late April, two teen-age students in Oakland, California, got an unwelcome, real-life lesson in civics. During a heated class discussion at Oakland High School about politics and President Bush, the boys made comments the exact nature of which are in dispute, but which their teacher believed constituted a threat toward the president. The teacher went to the FBI.

Secret Service agents showed up at the high school the next day to interview the boys, both 16. The school principal sat in for an hour and a half as agents interviewed each student individually, without their parents’ knowledge or consent. “He asked us questions like was I a good shooter … was I a good sniper … am I good dealing with guns, and what are my thoughts on the president,” one of the boys told San Francisco Bayview. “I was very scared. I was crying because of what they said to us.”

The FBI has followed up on thousands of “tips” since the attacks of 9/11. In June, Atlanta bookstore employee Marc Schultz found himself visited by FBI agents after someone spotted him reading an article titled “Weapons of Mass Stupidity” at a local coffee shop. Schultz has dark hair and a beard, and the combination was apparently enough to make someone call the FBI. Schultz says the agents told him: “There’s no problem. We’d just like to get to the bottom of this. Now, if we can’t, then you may have a problem. And you don’t want that.”

The FBI denies investigating anyone solely for First Amendment activities. “The mere fact that we go out and talk to someone does not cast aspersions on them, is not intended to violate their rights,” says Ross Rice of the FBI’s Chicago office.

Perhaps more disturbing than jarring visits from the FBI are signs that state, local, and federal law enforcement agencies are systematically monitoring First Amendment activities—including those of religious groups—in the name of safety and security in a post-9/11 age.

The FBI contacted the San Francisco Independent Media Center after 9/11, according to Ian MacKenzie, a volunteer at the center, to investigate what they said was a posting threatening the president. Agents wanted user logs for the group’s Web site, “which we don’t have,” MacKenzie says, “so we couldn’t give to them.” He says federal agents have contacted Indymedia centers around the country in efforts to discover the identities of specific online posters. “What it tells me,” he says, “is that they keep track of us, and that they watch independent media centers.”

In the past year, state and local police departments from Oakland to Atlanta have admitted to monitoring political protest and other kinds of associational activity.

“I don’t think this is different from people being visited in the ’60s,” says Ed Yohnka of the Illinois chapter of the American Civil Liberties Union (ACLU) “What we’re seeing again today is a pattern across the country. This isn’t a kind of random response. This is clearly part of affirmative policies to engage in these kinds of activities.”

In March 2002, the ACLU filed a lawsuit in Denver charging that, beginning in the early ’80s, police had monitored peaceful protest and First Amendment expression. “The police have no legitimate reason to keep files on the peaceful expression of political views and opinions,” the ACLU’s Mark Silverstein said at the time.

Ignoring a city prohibition against the collection of First Amendment-related intelligence, the Denver Police developed files on 208 organizations and 3,200 individuals. The department appears to have continued its surveillance until the fall of 2002, despite the ACLU lawsuit. Monitored groups included the American Friends Service Committee (a pacifist Quaker group), Amnesty International and many others with no history of criminal activity. Documents obtained by the ACLU describe how police intercepted e-mails, recorded the license plate numbers of vehicles at demonstrations, and infiltrated advocacy group meetings.

Under the terms of a settlement reached in May, Denver police can no longer gather First Amendment-related information without a reasonable suspicion of criminal activity. As a result, the surveillance threshold in Denver is far higher than that of the federal government, particularly since Attorney General John Ashcroft loosened domestic spying guidelines last year.

Consent decrees like Denver’s were established in numerous U.S. cities in the wake of the Cointelpro-era abuses of the ’60s and ’70s. But while Denver may represent a bright spot in the post-9/11 battle for civil liberties, other cities’ consent decrees are under assault. New York law enforcement officials successfully argued in court that the city’s decree hindered its investigations into terrorism, particularly in regard to snooping on mosques. Its restrictions on First Amendment-related surveillance have subsequently been eliminated.

In early 2001, the Chicago police won a similar effort to weaken its consent decree and, in the fall of 2002, began to utilize its renewed surveillance powers. City police sought the change, says Lt. Tina Skahill of the Chicago Police Office of Legal Affairs, because they needed greater power to fight “street gangs and guns and drugs. Basically what we’re interested in is the safety of the citizens.” But when asked whether the surveillance powers are being used solely to monitor “gangs and guns and drugs,” Skahill wavers: The modified consent decree is used in relation to “any information we have that comes to our attention where we believe the safety of citizens is concerned.”

As a major part of the Bush administration’s anti-terrorism strategy, the FBI added local police officers to the staff at its 66 regional Joint Terrorism Task Forces (JTTFs)—half of which were established after 9/11. Documents obtained by the ACLU in its Denver lawsuit portray an extraordinary level of surveillance of First-Amendment activity protected by the Bill of Rights. They also indicate a high level of cooperation between the Denver police and the FBI.

Denver police forwarded intercepted e-mails and the license plate numbers of activists at nonviolent demonstrations to the Denver JTTF. The e-mails appear to be disturbingly minor: One sent in 2001 to members of the Rocky Mountain Animal Defense group contained only a few sentences, directing members to distribute an attached flyer that promoted a “Fur Free Friday” campaign.

A similar cooperation between local, state, and federal law enforcement may be reflected in a recent crackdown on activists in St. Louis. Demonstrators in that city had planned to protest at the annual meeting of the World Agricultural Forum in May. But before the protest, representatives from several police departments, including Seattle’s, visited St. Louis police to share tactics and information about violent protest. Though St. Louis police deny making preemptive arrests, activists say that as a result of these visits, two days before the scheduled demonstration, police pre-emptively arrested 22 of the protest organizers. “The [visiting police] basically put the St. Louis Police Department on a state of high alert,” says J. Justin Meehan, an attorney who represented those arrested. “Sensing the worst, the police decided to proactively and unilaterally have a pre-emptive strike.”

Meehan says he and other activists believe federal and state law enforcement were also involved in the arrests: “It is believed the Office of Homeland Security was involved,” says Meehan. “There were officers there who refused to identify themselves and who were in a position of authority.”

Ashcroft’s Justice Department also advises police officers in at least some states to gather information on “enemies in our own backyard.” In a police training manual titled “A Police Response to Terrorism in the Heartland: Integrating Law Enforcement Intelligence and Community Policing” officers are encouraged to investigate members of the “Green Movement”—defined as “environmental activism that is aimed at political and social reform with the explicit attempt to develop environmental-friendly policy, law and behavior.”

In February, Newsweek reported that the FBI plans to set investigative and wiretap goals based on demographic information, including the number of mosques in an area. The Domestic Security Enhancement Act of 2003, or Patriot II, which Congress will take up in the coming months, would also eliminate municipal agreements that limit investigations and intrusive monitoring. “This is not simply a random circumstance,” says the ACLU’s Yohnka, “but appears to be part of a larger, broader pattern coming out of Washington, D.C.”

Activists are feeling the heat. “Not to be alarmist, but what’s increasingly clear to me—and I don’t do anything illegal, I’m a volunteer with a leftist news organization—is that no one is safe,” says MacKenzie from the San Francisco Indymedia Center. “Anyone can be and will be targeted. It should be sobering. Liberals, leftists—everyone is a target.”
Have thoughts or reactions to this or any other piece that you'd like to share? Send us a note with the Letter to the Editor form.
More articles by Kristie Reilly
Culture
Not a Drop to Drink
Feature
No Limits: Introduction
The lack of women in high-level government positions is one of the most glaring, yet least talked about, problems facing women today. In the past four decades, women have entered politics in significant numbers.
Feature
Left Behind
An interview with RAWA's Sahar Saba.
Similar articles
Feature
Woodstock in Transition
A small town in upstate New York rallies in the face of environmental disaster.
Polly Howells
Feature
A Crash Course in Citizen Budgeting
What Chicago can learn from participatory budgeting projects around the world.
Joel Handley
Feature
It’s Been Getting Better; Now Someone Tell Hollywood
Debunking the American Horror Story of gay and lesbian aging.
Dustin Goltz
Subscribe to our free newsletter
Fearless journalism that speaks truth to power
Limited Time: