Slavoj Žižek: The Urgent Necessity of a Syriza Victory in Greece

Only a split from the European Union by Greece can save what is worth saving in the European legacy: democracy, trust in people and egalitarian solidarity. 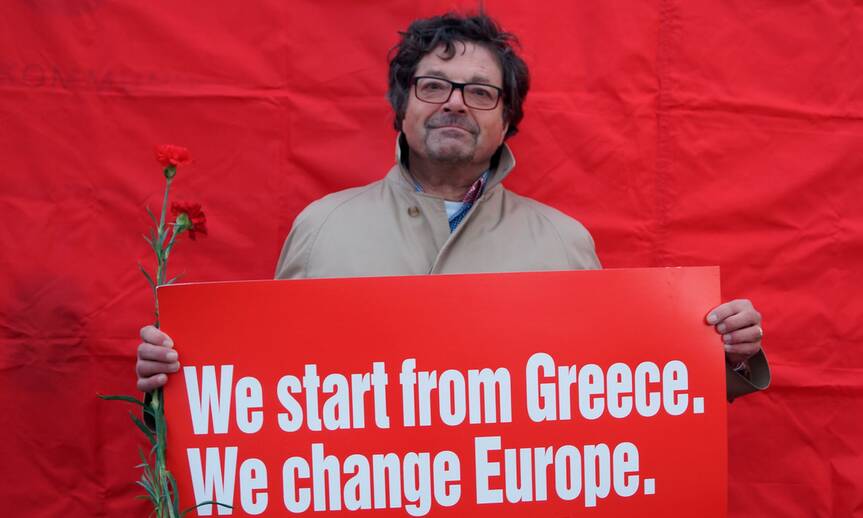 Crit­ics of our insti­tu­tion­al democ­ra­cy often com­plain that, as a rule, elec­tions do not offer a true choice. What we most­ly get is the choice between a cen­ter-Right and a cen­ter-Left par­ty whose pro­gram is almost indis­tin­guish­able. Next Sun­day, Jan­u­ary 25, this will not be the case — as on June 17, 2012, the Greek vot­ers are fac­ing a real choice: the estab­lish­ment on the one side; Syriza, the rad­i­cal left­ist coali­tion, on the other.

Debt is an instrument to control and regulate the debtor, and, as such, it strives for its own expanded reproduction.

And, as is mostly the case, such moments of real choice throw the establishment into panic. They paint the image of social chaos, poverty and violence if the wrong choice wins. The mere possibility of a Syriza victory has sent ripples of fear through markets all around the world, and, as is usual in such cases, ideological prosopopoeia has its heyday: markets have begun to “talk,” as if they are living people, expressing their “worry” at what will happen if the elections fail to produce a government with a mandate to continue with the program of fiscal austerity.

An ideal is gradually emerging from this European establishment’s reaction to the threat of Syriza victory in Greece, the ideal best rendered by the title of Gideon Rachman’s comment in the Financial Times: “Eurozone’s weakest link is the voters.” In the establishment’s ideal world, Europe gets rid of this “weakest link” and experts gain the power to directly impose necessary economic measures; if elections take place at all, their function is just to confirm the consensus of experts.

From this perspective, the Greek elections cannot but appear as a nightmare. So how can this catastrophe be avoided? The obvious way would be to return the fright—to scare the Greek voters to death with the message, “You think you are suffering now? You ain’t seen nothin’ yet—wait for the Syriza victory and you will long for the bliss of the last years!”

The alternative is either Syriza stepping out (or being thrown out) of the European project, with unforeseeable consequences, or a “messy compromise” when both sides moderate their demands. Which raises another fear: not the fear of Syriza’s irrational behavior after their victory, but, on the contrary, the fear that Syriza will accept a rational messy compromise which will disappoint voters, so that discontent will continue, but this time not regulated and moderated by Syriza.

What maneuvering space will the eventual Syriza-led government have? To paraphrase President Bush, one should definitely not misunderestimate the destructive power of international capital, especially when it is combined with the sabotage of the corrupted and clientelist Greek state bureaucracy.

In such conditions, can a new government effetively impose radical changes? The trap that lurks here is clearly perceptible in Thomas Piketty’s Capital in the Twenty-First Century. For Piketty, capitalism has to be accepted as the only game in town, so the only feasible alternative is to allow the capitalist machinery to do its work in its proper sphere, and to impose egalitarian justice politically, by a democratic power which regulates the economic system and enforces redistribution.

Such a solution is utopian in the strictest sense of the term. Piketty is well aware that the model he proposes would only work if enforced globally, beyond the confines of nation-states (otherwise capital would flee to the states with lower taxes); such a global measure requires an already existing global power with the strength and authority to enforce it. However, such a global power is unimaginable within the confines of today’s global capitalism and the political mechanisms it implies. In short, if such a power were to exist, the basic problem would already have been resolved.

Plus what further measures would the global imposition of high taxes proposed by Piketty necessitate? Of course the only way out of this vicious cycle is simply to cut the Gordian knot and act. There are never perfect conditions for an act—every act by definition comes too early. But one has to begin somewhere, with a particular intervention; one just has to bear in mind the further complications that such an act will lead to.

And what to do with the enormous debt? European policy towards heavily indebted countries like Greece is the one of “extend and pretend” (extending the payback period, but pretending that all debts will eventually be paid). So why is the fiction of repayment so stubborn? It is not only that this fiction makes debt extension more acceptable to German voters; it is also not only that, while the write-off of the Greek debt may trigger similar demands from Portugal, Ireland, Spain. It is that those in power do not really want the debt fully repaid.

The debt providers and caretakers accuse the indebted countries of not feeling enough guilt—they are accused of feeling innocent. Their pressure fits perfectly what psychoanalysis calls superego. The paradox of the superego is that, as Freud saw it clearly, the more we obey its demands, the more we feel guilty.

Imagine a vicious teacher who gives to his pupils impossible tasks, and then sadistically jeers when he sees their anxiety and panic. The true goal of lending money to the debtor is not to get the debt reimbursed with a profit, but the indefinite continuation of the debt which keeps the debtor in permanent dependency and subordination.

Take the example of Argentina. A decade or so ago, the country decided to repay its debt to the IMF ahead of time (with the financial help from Venezuela), and the reaction of the IMF was surprising: Instead of being glad that it got its money back, the IMF (or, rather, its top representatives) expressed their worry that Argentina will use this new freedom and financial independence from international financial institutions to abandon tight financial politics and engage in careless spending.

Debt is an instrument to control and regulate the debtor, and, as such, it strives for its own expanded reproduction.

The only true solution is thus clear: since everyone knows Greece will never repay its debt, one will have to gather the courage and write the debt off. It can be done at a quite tolerable economic cost, just with political will. Such acts are our only hope to break out of the vicious cycle of cold Brussels neoliberal technocracy and anti-immigrant false passions. If we don’t act, others, from Golden Dawn to UKIP, will do it.

In his Notes Towards a Definition of Culture, the great conservative T.S. Eliot remarked that there are moments when the only choice is the one between heresy and non-belief, i.e., when the only way to keep a religion alive is to perform a sectarian split from its main corpse. This is our position today with regard to Europe: only a new “heresy” (represented at this moment by Syriza), a split from the European Union by Greece, can save what is worth saving in the European legacy: democracy, trust in people, egalitarian solidarity.

Slavoj Žižek, a Sloven­ian philoso­pher and psy­cho­an­a­lyst, is a senior researcher at the the Insti­tute for Human­i­ties, Birk­beck Col­lege, Uni­ver­si­ty of Lon­don. He has also been a vis­it­ing pro­fes­sor at more than 10 uni­ver­si­ties around the world. Žižek is the author of many books, includ­ing Liv­ing in the End Times, First As Tragedy, Then As Farce, The Year of Dream­ing Dan­ger­ous­ly and Trou­ble in Paradise.
Have thoughts or reactions to this or any other piece that you'd like to share? Send us a note with the Letter to the Editor form.
More articles by Slavoj Žižek
Viewpoint
Slavoj Zizek: We Must Rise from the Ashes of Liberal Democracy
Trump is a threat to global stability—only a new Left international can beat him.
Feature
Slavoj Zizek: Lessons From the “Airpocalypse”
On China's smog problem and the ecological crisis.
Feature
Slavoj Zizek: The Left’s Fidelity to Castro-ation
In the last decades, Cuban “socialism” continued to live only because it didn’t yet notice it was already dead.
Similar articles
Feature
Knights of the Progressive Roundtable
Monthly meetings give members of the public an intimate audience with Congressional representatives.
Pamela Powers Hannley
Feature
Non-Profits Take To the Air
New FCC rules will enable hundreds of community organizations to apply for FM licenses.
Cole Stangler
Feature
Wage Theft’s Top Cop
Meet Julie A. Su, bane of the deadbeat employer
Spencer Woodman
Subscribe to our free newsletter
Fearless journalism that speaks truth to power
Limited Time: