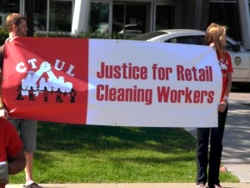 Organizers say a lawsuit filed by a Minnesota grocery store chain against a worker center is nothing more than an attempt to bankrupt and silence them. Supervalu's suit is a culmination of activity over 18 months in which workers have been calling for fair pay and better working conditions.

In May, In These Times reported that workers, frustrated with lack of response from representatives at Supervalu, parent company of Cub Foods, went on a 12-day hunger strike. That strike ended when several state lawmakers attempted to get executives at the retail chain giant to meet for talks and called on the group to end the fast.

The chain also filed a temporary injunction imposed by a judge and, among other things, ordered CTUL to post the suit on its website and Facebook page and on any Twitter feeds and link the order in any email, web postings or Twitter feeds concerning any planned actions against Cub Foods.

“We did not want to file a suit against CTUL, but because of their aggressive protests taking place in our stores we had no choice,” said Mike Siemienas, a spokesman at Supervalu, Inc. told In These Times.

Attorneys representing CTUL have filed a motion to dismiss the charges.

“We find it hard to believe the lawsuit was because of that. We believe it is aimed at trying to bankrupt us and silence us,” said CTUL spokeswoman Veronica Mendez, who has also been named in the suit.

The workers are calling for job safety and a "Code of Conduct."

CTUL stated that it believes the lawsuit is in retaliation for the nonprofit calling on the help of the government to help resolve the labor dispute.

“Cub Foods should be commended for donating to food pantries and helping tornado victims. But the core of good corporate citizenship is not charitable giving; it’s treating your workers with respect and dignity. These workers have asked for little more than to meet and discuss their pay and work rules, and they have been rebuffed,” Congressman Ellison said in a statement.

Supervalu is one of the 100 richest corporations in the world – making more than $40 million in profits last year. For the quarter ending June 18, it reported a profit of $74 million, according to the Wall Street Journal.

Meanwhile, over the past 10 years, working conditions for cleaners have deteriorated. Many cleaners who once earned between $10-11 an hour now earn $7-8 an hour. The cleaning crew has shrunk from four to two, according to Mendez.

Cub Foods says it’s not responsible for the poor treatment of workers because they are subcontracted out to a cleaning company, Carlson Building Maintenance, whom Cub says is responsible for their workers. Said Siemienas, “It is a common practice for retailers to use third-party services to clean their floors. We ensure that our contractors follow all laws and labor laws.”

However, this practice allows retail companies take the lowest bid, pitting maintenance companies against each other. To keep the costs low, these companies do what they can to cut corners.

Mendez explains that Carlsen has told workers they do not have the money because they are not getting more money from Supervalu and that in fact, the price of the contract is going down.

“Carlsen doesn’t have ability to pay workers what they need to be paid. It’s clear to us that if there’s going to be real change, it has got to come from Supervalu.”

This week, workers and faith leaders went to a recent Supervalu shareholder meeting in Edina, Minn. Pastors Grant Stevensen and the Rev. John Gutterman got in, and asked the company to do the right thing.

Stated CTUL member Lucila Dominguez, who was one of the people who took part in the hunger strike in May.

This problem will not change until large retail chains like Cub Foods agree to ensure fair wages and working conditions for workers who clean their stores regardless of which contractor they use.

Said Mendez, “They’ve made lots of claims as to why they wanted this lawsuit, when all we wanted to do was sit and talk."