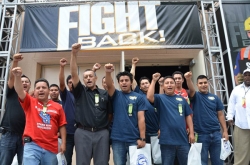 Thirty Southern California car wash workers have become the first in the business to sign a union contract—and organizers are hoping more will follow suit.

The CLEAN Carwash Campaign announced on Tuesday that employees at the Bonus Car Wash in Santa Monica signed a two-year agreement that will improve work conditions in an industry with a history of labor violations. It is the first contract won by CLEAN, which stands for the Community Labor Environmental Action Network.

“We’re really excited to finally have a union car wash in L.A. County where people can go and get their cars washed with a clean conscience,” Chloe Osmer, Acting Director of the CLEAN campaign, told In These Times.

According to the contract, which the AFL-CIO helped secure, workers at Bonus Car Wash will see a 2-percent wage increase. In addition to health and safety measures, the contract prohibits the employer from firing workers without just cause or discharging those who voice safety hazard concerns. There is also a grievance and arbitration procedure to settle disputes.

“We are looking forward to a partnership with the United Steelworkers that will make our business stronger and improve the opportunities and job satisfaction for all of our employees,” Mike Watson, General Manager of Bonus Car Wash, said in a statement.

The campaign said the owner has committed to re-opening another car wash in Venice that closed last December. Workers there also have union recognition and a contract, although the owner does not currently own the property.

The United Steelworkers union represents the workers, a sign of organizing efforts in  nontraditional areas discussed by Mike Elk in his recent Working In These Times piece. In August, workers at Bonus and Marina Car Wash in Venice, both of which are owned by the same family, recognized the union. A separate mobile car wash with seven employees had done the same weeks earlier.

Robert LaVenture, USW director of the district that oversaw the campaign, said the employees in the industry were being treated like workers in a third-world country. He added that helping the car wash workers was “the right thing to do.”

“It really shows that the union is more than a  dues collection group that we sometimes have our enemies tell us we are. It’s really a social justice [issue],” LaVenture said.

The contract is a significant step for the workers in a city where car washing is extremely popular. Los Angeles has the highest car density in the country and boasts the most car washes of any large city. The 430 establishments also generate big business. Prices for washes can range from as little as $5 to $200 for full-service cleaning. Southern California car washes profit an average $1 million per year, according to a 2008 CLEAN report.

Yet the employees, many of them immigrants, often worked 10 hour days, six days a week while enduring environmental and health hazards. Employers reportedly flout minimum wage laws, leaving many of the city county’s 10,000 car wash workers to take home just $30-$40 a day.

Osmer said workers have already noticed a change in the workplace:

We’ve heard workers at Bonus Car Wash have told us in terms of how they’re treated by management is night and day. I think the biggest thing for them is that they feel like their work is respected. They don’t have somebody standing over their shoulder, telling them to hurry up; you can’t take a break or drink water; you can’t eat lunch. They’re actually allowed to do their jobs. The owners are following the law now.

Osmer added that the momentum has given hope to other car wash workers looking to improve their work conditions. “We encourage the other car washes in Santa Monica to step up to the plate and raise standards, and allow their workers to unionize as well,” he said.

One focus may be to encourage public agencies to have their fleets washed at venues with a commitment to uphold workers’ rights such as at Bonus.

USW’s LaVenture also added that the focus will remain on organizing workers in California, but he did not rule out national efforts.

“If the call is there, and we see it happening, you can believe the USW and the AFL-CIO will be participating in that,” he said.