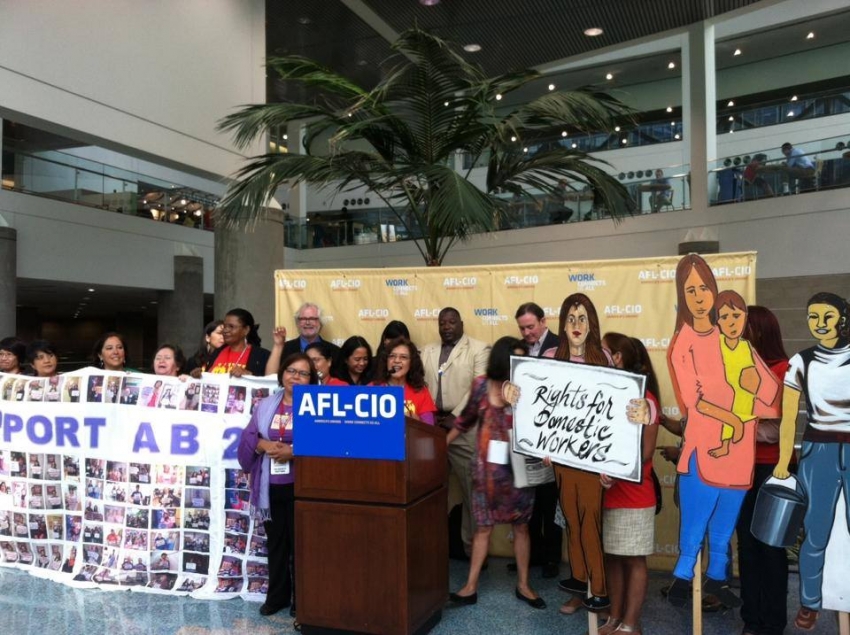 Governor Jerry Brown signed The Domestic Worker Bill of Rights (AB241) today, making California the third state in the nation, after New York and Hawaii, to pass such a bill.

Domestic workers from across the state have battled for a Bill of Rights for more than seven years. The bill will provide domestic workers with some of the most basic workplace protections – protections that have been denied them for decades.

The 1938 Fair Labor Standards Act excluded domestic workers from the most basic protections enjoyed by almost all working people, including rest and meal breaks, and overtime. California employers took full advantage of the exemption: In “Home Truths,” a survey of 631 domestic workers in 14 California cities, 91 percent reported that overtime provisions were not included in their agreement. The bill rights this historic wrong, guaranteeing overtime pay for domestic workers who work more than nine hours in a shift or more than 45 hours in one week.

The bill will benefit the estimated 200,000 domestic workers in California, nearly three-quarters of whom are immigrants and 67 percent of whom are Latina.

“Domestic workers are primarily women of color, many of them immigrants, and their work has not been respected in the past,” said the bill’s author, San Francisco Assemblyman Tom Ammiano, in a press statement today. “Now, they will be entitled to overtime, like just about every other California working person. I’ve been pushing domestic worker legislation for three years, and have watched as domestic worker rights have grown into a movement. I’m proud that my bill is another important step in the movement to get these workers all the labor protections they have earned and deserve.”

However, it is not all roses. Assembly Bill 241 is a diluted version of Ammiano's original proposal for a Domestic Workers Bill of Right, which passed the Assembly only to be vetoed by Brown last year. The new version was amended to exclude daily meal and rest break provisions, and to exempt occasional babysitters from overtime requirements. It also includes a three-year sunset provision, which means the governor will set up a committee to review the success of the bill, and lawmakers will have three years to make it permanent.

And ironically, some of the law’s stipulations are now redundant, after a federal rule change last week required minimum wage and overtime for home healthcare workers. But the California bill will extend protections to in-home child care workers, who are not included in the federal ruling. The bill also allows live-in domestic workers eight hours of uninterrupted sleep.

Still, workers are celebrating despite their disappointment over the meal and rest break exclusions.

Support from civil rights, labor, feminist and interfaith leaders, workers and their families, allied employers, and community organizations helped fuel the long-awaited win. Rosa Sanchez, a caregiver from Los Angeles, said in a statement: “We have been fighting for basic protections like overtime for years in this state. This vote shows that we are not alone and that our voices are being heard.”

This bill is part of a broader movement to gain dignity and respect among some of the nations hardest and often most abused workers.

New York state passed a Domestic Workers Bill of Rights in 2010; Hawaii passed one in July; and workers are organizing to pass similar bills in Illinois, Massachusetts, Washington, Oregon and Connecticut.

“This movement is taking place all over the country and won’t be over until domestic workers rights are spelled out in every state,” said Ammiano in his statement today.