Is Gov. Scott Walker Preparing to Push for Right to Work in Wisconsin? 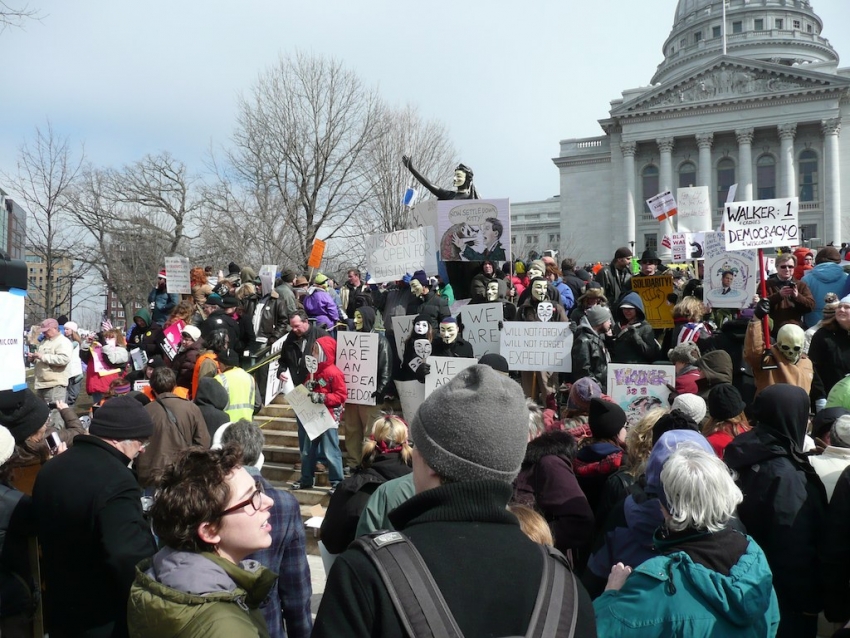 RTW laws are overt efforts to weaken unions and to deprive workers of a political voice in setting state priorities.   (John Michlig / Flickr)

The chips are down in Wisconsin. Wisconsin employers’ war against union rights may be about to heat up again as Republican legislators weigh pushing for a “right-to-work” bill.

The potential bill comes on the heels of Gov. Scott Walker’s AB10, which led to massive protests and the eventual crippling of public-sector unions. As it faces this latest threat, Wisconsin labor should ask itself a number of difficult questions:  Can the support of 300 unionized construction firms, which issued a statement expressing opposition to a right-to-work law for Wisconsin, and manufacturers who affirm the value of unions in providing trained workers and raising productivity, be counted on to slow down the anti-union frenzy of Republican legislators, the rest of the business establishment, and the new “astro-turf” group Wisconsin Right to Work with close ties to the billionaire Koch brothers?

Can the public be persuaded that the Right’s “forced unionism” rhetoric is a gross distortion of how union membership works? The reality is that no one in Wisconsin or anywhere in the U.S. can be “forced” to join a union. The Right’s target is actually not “forced unionism,” but “labor security” clauses that require fees from all workers benefitting from union representation, as unions are legally required to provide the same assistance to non-members as they do for members.  (Unions’ responsibility to non-paying members under the law is essentially boundless, obligating them to spend thousands of dollars, for example, in legal costs for arbitration and other procedures to protect a non-member from being fired unjustly.)

Can labor and its allies re-frame the fundamental issue as that of restructuring the economy to raise living standards for the vast majority? Or will Wisconsin use a new “right-to work” law to further disenfranchise working people? Is labor ready to fully mobilize its members who have sustained a series of political defeats since the massive 2011 rebellion—AB 10’s enactment, Walker turning back an historic recall effort in 2012, and his reelection on Nov. 4? Are union members—long accustomed to automatic dues check off and often viewing their membership as a kind of “insurance policy” upon which they can passively rely to protect their interests—fully aware of what “right-to-work” means and ready to fight it?

With the right-to-work legislation now being drafted before the next legislative session begins January 14, labor faces a set of rabid opponents—including top Republican legislative leaders and the central corporate lobby—even though Gov. Scott Walker is urging his Republican allies to adopt a go-slow approach while he focuses public attention on his budget plans. However, while Walker (who is increasingly viewed as a GOP presidential hopeful) seemingly wishes to avoid the image of inciting one massive conflict after another, labor leaders have said they think he would sign a right-to-work bill if it was passed through the state’s legislature. Walker sponsored a “right-to-work” bill almost as soon as he entered the legislature in 1993.

The anti-labor alliance wants to make Wisconsin the 25th “right-to-work” state in the U.S., joining Indiana, which passed it in 2011, and Michigan in 2012 as one-time Midwestern union bastions being transformed into union-hostile, low-wage right to work states.  Republican legislators, now almost uniformly hardline anti-union conservatives, hold overwhelming (and shamelessly gerry-mandered) majorities in both the State Senate  (18-15) and Assembly (63-36 ).

Urging rapid action is the fiercely anti-union Senate Majority Leader Scott Fitzgerald, who stated on FOX TV in 2011 that AB 10 would politically weaken public unions and make it impossible for President Obama to win Wisconsin in 2012. Similarly fired up for the right-to-work law is the ambitious and manipulative Assembly Majority Leader Robin Vos.

Wisconsin Manufacturers and Commerce, the state’s premier corporate lobbying group, has jumped on the right-to-work bandwagon. The WMC’s current stances are in stark contrast to its past cooperation with the State AFL-CIO in formulating policies on unemployment compensation, workers’ comp, and other issues. The WMC website now declares, “Since our neighbor to the east [Michigan] enacted worker freedom changes at the end of 2012, the state has been growing jobs”—a claim that is based on a few months of “evidence.”  WMC president and CEO Kurt Bauer stated, “Wisconsin’s transformation from an anti-business to a pro-business state has been remarkable, but it is also incomplete. There is more work to be done in order for our state to achieve its full economic potential."

Among “the work to be done” is what Bauer calls “worker freedom.” “Should joining a private-sector union be voluntary, as it is in 24 states, or should it be mandatory? Beyond the personal freedom component to this debate is the economic development argument. … Site selectors who decide where businesses expand or relocate shun closed-shop states like Wisconsin in favor of right-to-work states like Iowa, Indiana and Michigan."

WMC’s declared principle that “freedom” consists of not paying dues or fees while still being entitled to receive benefits does not extend to its own operations. Labor activist Cathy Wilkes of Madison, recently called the WMC and explained that she wanted her small business to receive WMC benefits such as discounts but did not want to pay to join. Her request was rejected out of hand by a befuddled WMC staffer.

The new group Wisconsin Right to Work has been formed by Lorri Pickens, a long-time activist in the Koch-funded Americans for Prosperity. Michigan’s AFP chapter played a central role in the Michigan “right-to-work” campaign. The new Wisconsin group has already been showered with enough cash to begin running radio ads promoting the proposal.

The Right maintains that right-to-work laws promote economic growth as well as “workplace freedom,” but such laws are actually overt efforts to weaken unions and to deprive workers of a political voice in setting state priorities. In states that have passed such laws, the result is a clear and sharp difference in living standards for workers. Drawing on data from the Bureau of Labor Statistics, the Congressional Research Service concluded from 2011 figures that states permitting union-security provisions showed sharply higher wages: $50,867 to $43,641 for right-to-work states. Further, right-to-work states generally have lower levels of educational attainment, public health, and other indicators of government spending aimed at meeting the needs of the majority rather than large corporations, as is glaringly obvious in states like Mississippi. Infant mortality, for example, is 15% higher in right-to-work states.

The Wisconsin State AFL-CIO has responded to the right-to-work challenge with a massive effort to build opposition, according to federation President Phil Neuenfeldt. "Wisconsin is powered by our middle class—by the nurses, steel workers, teachers and construction workers who help shape our future, keep us safe and drive our economy. Right to Work would roll back the clock on workers' rights and take Wisconsin in the wrong direction," Neuenfeldt said.

The AFL-CIO’s effort against right-to-work will include public education campaigns, phone calls to legislators and participation in public hearings. “We’ve had a number of meetings around the state to make sure that affiliates do internal education, outreach to legislators, and learn how to talk about the issue,” Neuenfeldt says.

The campaign will also incorporate working with pro-union businesses like the 300 construction firms and manufacturers. The federation will also not be entirely defensive, he says, continuing to emphasize the need for a higher minimum wage and wage increases generally.

In the fall campaign, Scott Walker won reelection over Democratic millionaire businesswoman Mary Burke. But as in many states during the midterms, progressive ballot measures on higher minimum wages were successful. The AFL-CIO, the Service Employees International Union, Wisconsin Citizen Action, Wisconsin Jobs Now and others achieved overwhelming victories in advisory referenda in five counties and three cities calling for major increases in the minimum wage. The eight areas covered about one-third of the state’s population.

The referenda have helped to build momentum for wage increases sought by fast food and Walmart workers, and more generally, to raise awareness of the widespread wage crisis afflicting Wisconsin workers. In contrast, the right-to-work advocates, like Milwaukee Journal Sentinel columnist Christian Schneider, admit, “ States with such laws often have lower average wages as unions fade away."

But Schneider and other RTW backers quickly try to switch the focus of public debate to job growth, claiming that right-to-work laws generate more job growth. This a dubious argument given findings from the Economic Policy Institute: “Despite boosters' promises of job creation, researchers find that right-to-work had ‘no significant positive impact’ whatsoever on employment in Oklahoma, the only state to have adopted a right-to-work law over the past 25 years” before Indiana and Michigan.

Schneider’s comment shows the gap between right-to-work proponents and Wisconsin’s working majority. The state’s workers have witnessed widespread wage-cutting and a non-stop exodus to Mexico and China of precisely the “family-supporting jobs” hailed by Schneider.

In this context, the promise of more low-wage jobs being dangled by the “right-to-work” advocates is unlikely to seduce many Wisconsin workers or the public. The pro-corporate Right holds all the reins of power in Madison, but Wisconsin labor has an opportunity, as it did in 2011, to seize the state’s agenda—and perhaps the nation’s spotlight—with a demand for higher wages instead of a “right-to-work” scheme certain to drag down pay even further.