The UAW Vote in Mississippi is a Battle for the Soul of the U.S. Labor Movement 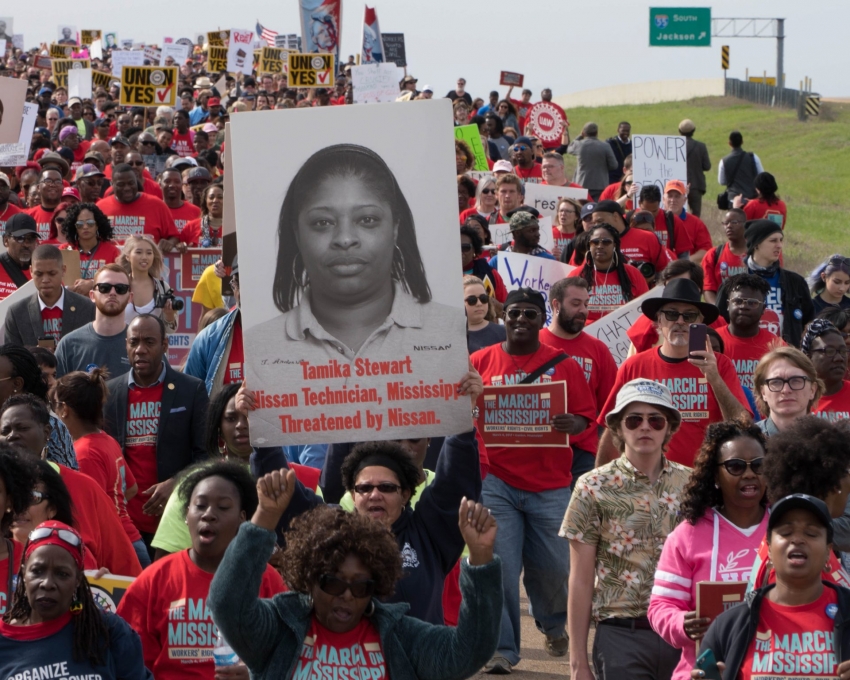 After years of painstaking work by United Auto Workers (UAW) organizers to build support for a union at the big Nissan auto and truck assembly plant near Canton, Miss., the workers themselves will vote today and tomorrow on whether to accept UAW their collective bargaining voice at the plant.

“I think it [union approval] will pass,” UAW president Dennis Williams told a press conference just days before the vote, “but we’re doing an ongoing evaluation. We’ve been thinking about it for six to seven months,” roughly since the UAW held a large march and rally at the factory attended by Bernie Sanders. The union says it is particularly concerned about a surge in the kind of unlawful management tactics to scare workers that brought charges against Nissan this week from the National Labor Relations Board.

The Canton factory is one of only three Nissan factories worldwide where workers do not have a union. Built in 2003, it is one of a spate of auto “transplants,” or foreign-owned factories built with state subsidies for the past three decades, largely in the South and border states.

Many see the upcoming vote as another test of whether unions can thrive in the South, where union membership has historically been well below the national average. However, the battle is far greater. Now the corporate strategies and values of the South have persisted and influenced multinational companies, as well as labor relations and politics in the North. The Nissan campaign is best conceived as a battle for the U.S. labor movement.

Nissan has not yet responded to a request for comment.

Organized labor, usually prodded by leftists in the movement, has undertaken high-profile campaigns in the South to organize unions across the racial divides. Such drives were especially prominent during the 1930s-era organizing upsurge and the post-World War II “Operation Dixie,” which lacked adequate support from existing unions and was plagued by internal political divisions.

The UAW has, at various times, escalated organizing in the South, especially when General Motors was considering relocating much production there in the 1960s—and when the transplant growth surged in recent decades.

Despite the shortcomings of labor’s campaigns, many union strategists think that unions can only reverse their decline by directly tackling the racist strategy of employers and their conservative political allies. But employers have many tools to divide workers, such as Nissan’s employment of temporary, contract workers to divide a predominately African-American workforce.

In recent years, the South has suffered key organizing blows, including the big defeat in January for the Machinists’ union trying to organize the new Boeing factory in Charleston, S.C., and the limited UAW success organizing a skilled trades union at Volkswagen in Chattanooga, Tenn. against a supposedly neutral employer. Such defeats typically inspire funereal chants for labor rights and unions, but sound like party music for managers and investors.

Yet, some organizers dispute that the South is impossible territory. One veteran organizer with the AFL-CIO, who has overseen many organizing drives in the South and asked not to be identified or directly quoted, said that he thought it was not significantly more difficult to organize in the South. It just took more time and more money.

The organizer cited one success that defied expectations: the campaigns over roughly 15 years to organize 26,000 workers and preserve business at Louisiana’s giant Avondale shipyards for a shifting cast of corporate owners doing repair and rebuilding work mainly on military contracts. Ultimately, a decline in military orders led its latest owner to close the shipyards, wiping out the organizing victory.

“The unions often do not realize it, but they have been winning in the South more than in the Midwest for years,” says Kate Bronfenbrenner, a Cornell University labor relations professor who specializes in research on union organizing. “Because [in the South] there are more women working, more African Americans, and because there’s less high-tech work.” Each of those categories of workers is more pro-union than their counterparts, thus building in a small theoretical advantage in the South.

In the end, it may be that the poor labor standards of the South are spreading nationwide. The ascendant conservative political power of the new Republican Party, linked with the more aggressively anti-worker and anti-union policies of big corporations and financial firms, indicate that, in this country’s long Civil War, the South is gaining ground.

Consider what has occurred from 1983, when Ronald Reagan’s “morning in America” ads were on the horizon, as well as in 2016, when Donald Trump pledged to “make America great again.” Then and now, most people would consider Michigan and Wisconsin as typically northern, in terms of labor conditions and union density. Yet over that period, federal data shows that the percentage of all workers in Michigan who were covered by union contracts dropped from 32.8 percent in 1983 to 15.5 percent in 2016. For Wisconsin, the share dropped from 26.9 percent to 9.0 percent.

Unions are losing members and failing to gain new ones at an adequate rate to avoid the rough halving of the union share of the workforce over the past 15 years in most of both the South and the North.

Assault on workers knows no boundaries

It will be better for workers everywhere if the Canton, Miss., workers vote for the union, but management still has the upper hand. Workers are still weak and getting weaker nearly everywhere, with partial exceptions, like the Fight for 15 movement, which flourishes in nearly all of the country.

“Right to work” laws threaten unions nationwide, by prohibiting them from charging agency fees to workers who do not join the union but benefit from actions it takes. In recent years, the widespread passage of such laws outside of the South—now extending to half of all states—is a clear indication of the decline in union power.

Workers in Canton may win a union for a variety of reasons beyond the basic proposition that they need collective power to counter the power of their bosses. Or they may reject the union due to fear engendered by Nissan and its anti-union campaign, out of conservative political beliefs or for other reasons.

The best union organizers—and some very good organizers have played a major role at Nissan—understand how important it is to involve workers themselves as-organizers in reaching out to workers. In addition, organizers recognize it is vitally important to mobilize the progressive leaders and groups in the community for support, and employ a wide assortment of tactics to minimize the influence of the boss’s war on unions—a war conducted in large part on turf and terms favorable to the employer.

However, if the labor movement is striving to with significant gains for workers, it must create a progressive strategy for politics, workplace organizing and culture that focuses on the working class very broadly construed, including multiple levels of poverty, affluence and job histories. U.S. union organizing will need to strengthen and expand its community activities to develop a broader range of strategies to defeat racism. Within such a political context, union organizing might prosper—and workers might do so as well.

Whether the UAW does or does not win this summer, future successful organizing of workers in their communities and workplaces require an alternative political force that is more supportive and transformative.