From Whole Foods to Amazon, Invasive Technology Controlling Workers Is More Dystopian Than You Think 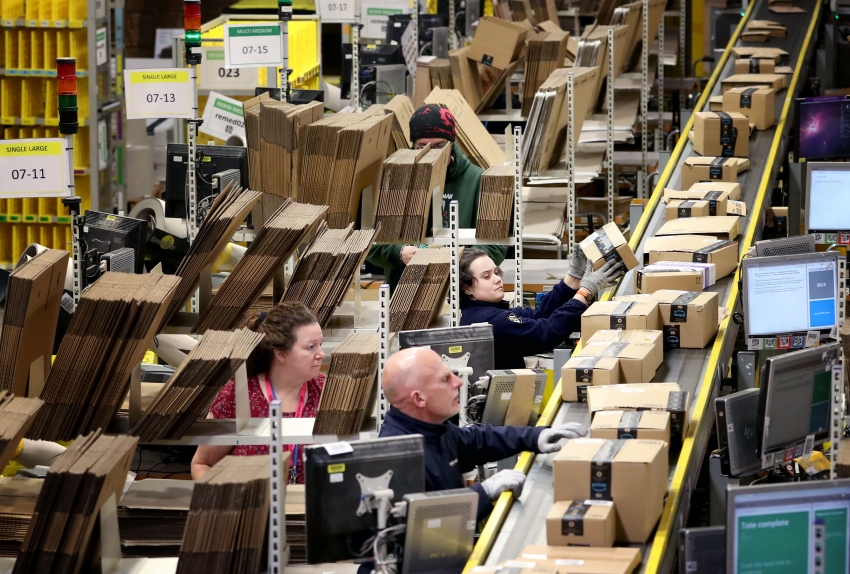 Amazon has received a patent for ultrasonic wristbands that could track the movement of warehouse workers’ hands during their shifts. (Jane Barlow/PA Images via Getty Images)

You’ve been fired. According to your employer’s data, your facial expressions showed you were insubordinate and not trustworthy. You also move your hands at a rate that is considered substandard. Other companies you may want to work for could receive this data, making it difficult for you to find other work in this field.

That may sound like a scenario straight out of a George Orwell novel, but it’s the future many American workers could soon be facing.

In early February, media outlets reported that Amazon had received a patent for ultrasonic wristbands that could track the movement of warehouse workers’ hands during their shifts. If workers’ hands began moving in the wrong direction, the wristband would buzz, issuing an electronic corrective. If employed, this technology could easily be used to further surveil employees who already work under intense supervision.

Whole Foods, which is now owned by Amazon, recently instituted a complex and punitive inventory system where employees are graded based on everything from how quickly and effectively they stock shelves to how they report theft. The system is so harsh it reportedly causes employees enough stress to bring them to tears on a regular basis.

UPS drivers, who often operate individually on the road, are now becoming increasingly surveilled. Sensors in every UPS truck track when drivers’ seatbelts are put on, when doors open and close and when the engines start in order to monitor employee productivity at all times.

The technology company Steelcase has experimented with monitoring employees’ faces to judge their expressions. The company claims that this innovation, which monitors and analyzes workers’ facial movements throughout the work day, is being used for research and to inform best practices on the job. Other companies are also taking interest in this kind of mood-observing technology, from Bank of America to Cubist Pharmaceuticals Inc.

These developments are part of a larger trend of workers being watched and judged—often at jobs that offer low pay and demand long hours. Beyond simply tracking worker performance, it is becoming more common for companies to monitor the emails and phone calls their employees make, analyzing personal traits along with output.

Some companies are now using monitoring techniques—referred to as “people analytics”—to learn as much as they can about you, from your communication patterns to what types of websites you visit to how often you use the bathroom. This type of privacy invasion can cause employees immense stress, as they work with the constant knowledge that their boss is aware of their every behavior—and able to use that against them as they see fit.

Lewis Maltby, president of the National Workrights Institute at Cornell University, tells In These Times that the level of surveillance workers are facing is increasing exponentially.

“If you look at what some people call ‘people analytics,’ it’s positively frightening,” Maltby says. “People analytics devices get how often you talk, the tone of your voice, where you are every single second you’re at work, your body language, your facial expressions and something called ‘patterns of interaction.’” He explains that some of these devices even record what employees say at work.

According to some experts, this high level of employee surveillance may actually harm the companies that use these techniques.

“In general, people experience more stress when they feel that someone is looking over their shoulder, real or virtual,” Michael Childers, director at the School for Workers, tells In These Times. “There is a large body of research documenting that stressful workplaces can potentially lead to many problems that reduce company profits, including increased turnover, more sick days used, higher workplace compensation costs, and ironically, even lower productivity.”

Richard Wolff, a professor of economics emeritus at the University of Massachusetts, tells In These Times that this type of surveillance “deepens the antagonism, mutual suspicion, and hostility of employer relative to employee. It degrades worker morale and will probably fail—leading employers to conclude not that such surveillance is a bad idea, but rather than they need to automate to get rid of workers altogether.”

While this level of worker surveillance may be alarming, it has so far gone largely unchecked. Congress has never passed a law to regulate employee surveillance, Maltby says, and he doesn’t think it will any time soon. However, he says that either Congress or the Supreme Court could finally decide that employers have gone too far when they start tracking employee movement during a worker’s time off.

“The fight we’re gearing up for is [tracking] behavior off duty,” Maltby says. “Every cell phone in America has GPS capabilities baked into it,” along with cameras and microphones. Maltby worries that employers could soon begin using this technology to track the behavior of their employees outside of work. If this were to happen, Maltby believes U.S. lawmakers could be compelled to step in.

One the of the fears that labor and privacy advocates hold is that, over time, workers could get used to these types of invasions, and begin accepting them as a normal part of the job.

“The first time people hear about the newest privacy invasion, they get extremely angry, but eventually they just get used to it,” Maltby says. For example, at many jobs drug tests are now seen as standard, despite the fact that they invade employees’ private lives by monitoring their behaviors outside of work.

At a time of soaring inequality, low-wage workers are bearing the brunt of efforts to increase productivity and profits. The rise of these new tracking techniques show that companies are moving toward increasing their control over the lives of their employees.

While workers at the bottom of the wage scale may be the first to face such dystopian working conditions, other industries could soon embrace them. If we don’t want to live and work under the constant supervision of a far-away boss, now is the time to speak up and push back.