Don’t Like War? Then Don’t Work! Remembering When Dockworkers Shut Down the Ports on May Day 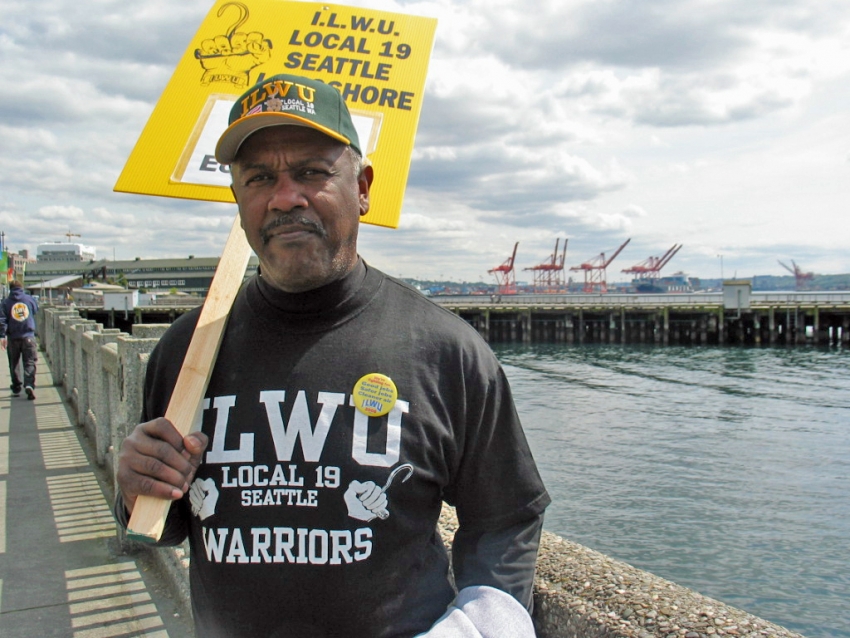 ILWU Local 19 member Al Webster joined the other 10,000 United States Longshore workers who voluntarily gave up a day's pay to protest the Iraq War on May 1, 2008. (WikiGolightly/Creative Commons)

​May Day—a legal holiday for workers in most countries—was born in Chicago. On May 1, 1886, workers shut down America’s greatest industry city, and other cities too, to demand the 8-hour workday. In 1894, the U.S. Congress intentionally created a Labor Day at another time of the year, but some Americans continue celebrating the original, real Labor Day.

On May 1, 2008, 10,000 members of the International Longshore and Warehouse Union (ILWU), one of the strongest and most militant unions in the United States, walked in those Chicagoans’ footsteps. They did so by walking off the docks at all 29 West Coast ports, completely shutting down America’s Pacific trading network.

These workers did so, they said, “to demand an immediate end to the war and occupation in Iraq and Afghanistan and the withdrawal of U.S. troops from the Middle East.” Their action revealed the power of organized labor as well as ongoing frustration with U.S. wars that continue to this very day.

The plan for this “stop work” originated inside Local 10, which represents dockworkers throughout the San Francisco Bay Area. Jack Heyman, a long-time rank-and-file militant in Local 10, played a key role in organizing for the 2008 May Day action, alongside other internationally-minded socialists in the local. In 2007, these socialists helped organize an international labor conference to stop the war in Iraq. Unionists from around the world participated, as did British Labour MP Jeremy Corbyn. As Heyman tells In These Times, “The main resolution of that conference was for trade unions to go back and organize strikes at the point of production.”

Subsequently, Local 10 offered a resolution at the ILWU Longshore Caucus, in which workers elected from every local meet to establish union-wide policy. They proposed a “stop work meeting” during the day shift on May Day to protest America’s imperialist wars in Iraq and Afghanistan. Although within their contractual rights, rarely are such meetings held for an entire shift, let alone for a day shift or for a political reason.

The International officers and Local 13 officials (Port of Los Angeles-Long Beach) urged caution, as recalled by several workers present at this Caucus. However, as Samantha Levens, then a rank-and-file member of the San Francisco Region of the ILWU’s Inland Boatmen’s Union, recalls in an interview with In These Times, “Members from across the ILWU rose and spoke in favor of the resolution. I was new to the ILWU at this time, so this was the most moving thing to me. Many members spoke passionately against the war, many were veterans or had children in the military.” The resolution passed 97-3.

After much planning, including the organizing of marches and rallies in conjunction with the shutdowns, ILWU members stopped work in every port on May 1. As Seattle’s Local 19 President Herald Ugles said at the time, “Normally, when I see the cranes all boomed-up [longshore parlance for not moving], it makes me sad … But today it’s a great sight to see—not just here, but all up and down the West Coast!”

Heyman recalls, “That was uncertain going into the action, because PMA [Pacific Maritime Association], the employers’ association, was publicizing that the action was illegal and they’d take action in courts to stop it. Besides, they arrogantly stated that the largest longshore local on the Coast, L.A., would go to work. L.A. officials were not committing themselves, but on May Day the membership spoke loud and clear. Nothing was moving on the docks that day!”

Thanks poured in from around the world. As published in the June 2008 issue of the ILWU’s monthly magazine, Dispatcher, someone identified as “M.J.” wrote, “My husband is currently serving his second 15-month tour in Iraq. I want to thank you for your brave, and in my view, highly effective protest of the Iraq war. My husband and I are very pro-union for a lot of reasons, and you’ve given us another great reason to proudly say Union YES!!!”

Perhaps the most poignant message came from the General Union of Port Workers in Iraq: “The courageous decision you made to carry out a strike on May Day to protest against the war and occupation of Iraq advances our struggle against occupation to bring a better future for us and for the rest of the world as well.”

“Longshore workers tried to show the labor movement that the working class has the power to stop these imperialist wars,” says Heyman. “The chant at the start of the Iraq War in the port of Oakland [in 2003] was “War is for profit, workers can stop it!”

The 2008 action belongs to the ILWU’s 80-year-and-counting history of labor and political activism. From its inception, the ILWU has been racially integrated, and Local 10 has proven particularly committed to recruiting African Americans and other working people of color. In their formative “Big Strike” of 1934, dockworkers won a coast-wide contract, a union-controlled hiring hall, wage increases and more.

In 1999, the ILWU shut down the coast to demand the release of journalist, former Black Panther and death row political prisoner Mumia Abu-Jamal. Arguably, their effort played a role in stopping the state of Pennsylvania from executing him.

“The May Day 2008 anti-war walk-out was a clear reminder of the right and need of union members to be social activists,” Todd Iverson, a current leader in Local 23 (Tacoma) and participant in 2008, tells In These Times. “The ILWU has a long history of standing up for social justice from apartheid to wage inequality and more recently Black Lives Matter. We as ILWU members feel an obligation to be the voice for the voiceless.”