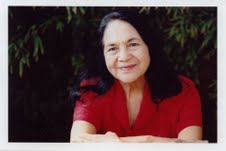 A tapestry of justice makes up the life of Dolores Huerta, legendary labor and civil rights activist and co-founder of the United Farm Workers Union.

For over half of her life, Huerta has put herself on the frontlines in the fight for civil rights, immigrant, labor and farm worker rights.

She’s been arrested more than 20 times in her acts of non-violent civil disobedience. In 1988 she beaten so badly by an SFPD officer outside the Sir Francis Drake Hotel at a rally that her spleen had to be removed.

It may have slowed her down, but only for a while.

This weekend Huerta celebrated her 80th birthday in Los Angeles at a fundraiser “Weaving Movements Together," The event featured Carlos Santana, Lila Downs, Pete Escovedo, Danny Glover, Benjamin Bratt and many others.

Huerta recently participated in StoryCorps oral history project, in conversation with her daughters Camila Chavez and Lori de Leon, where she shared the highlights of her labor activism. Storycorps has collected and archived more than 30,000 interviews from more than 60,000 participants across the country.

Huerta, a youthful 80, continues to push for human rights at a time in history where immigrants have become targets and the historical mean spiritedness of some people in this country rises up again.

“We still have a very large anti-immigrant caucus in the US Congress," she told Goodman, "And, you know, we’ve got to focus on these Congress people and on the elections and take some of these people out of office ...My fear is that so many people are so disillusioned with what’s going on right now that they’re not going to vote in November. And I think that’s going to be just a huge disaster.”

Six years ago Huerta left the UFW to start The Dolores Huerta Foundation, which she founded in 2003 in Bakersfield.

The Foundation has taught dozens of young people the skill of community organizing and leadership training created by the late Fred Ross Sr., Cesar Chavez and Huerta.

These newly trained organizers are helping build a network of neighborhood organizations called "Vecinos Unidos" or, United Neighbors, who work collectively to make change and advocate for their rights in California's Central Valley.

Other DHF projects include a micro-lending and financial literacy program, and a policy advocacy program.

We’ve got to organize, and we’ve got to get good people to run, because at the end of the day, the votes are going to count more than the money. But we have to do the legwork. We’ve got to get out there and educate people and make them understand what’s going on and why we need to get involved.

Huerta’s activism has been pretty much non-stop.

She has battled segregation, organized field strikes, worked on collective bargaining agreements that banned growers from using killer pesticides like DDT and Parathyon, she fought for the right to vote in Spanish and to take driver’s license tests in Spanish, she helped secure the right to register voters door to door, lobbied for the Amnesty Program for undocumented farm workers in 1985, and so much more.

It was through the Community Service Organization, a grass roots organization started by the great Chicago organizer, Fred Ross, Sr., that Huerta met Cesar Chavez and together saw the need to organize farm workers.

Huerta and Chavez formed the National Farm Workers Association, the predecessor to the UFW. By 1965 the NFWA supported their Filipino brothers and sisters in a strike to demand higher wages from Delano grape growers and the two groups merged to eventually form the United Farm Workers Union.

Historically we hear so much about the role of men in  movements pushing for change. We hear less about the women, the mujeres in social movements. Their courage and strength. Their unwavering faith that circumstances will turn toward the better, their ability to empathize and convince, women like Dolores Huerta, Isabel Garcia, Maria Elena Durazo, the late Anna Mae Aquash (Mi'kmaq), Winona LaDuke, (Anishinaabekwe Ojibwe), and young women coming up behind them like Faviana Rodriguez, Camila Chavez, and so many others right there in the trenches walking the walk.

When the people come together, then they can make a lot of changes. And some of the changes are absolutely miraculous.…

I’m committing the rest of my life, as I have all of my adult life, to organizing, because I do believe that we do have the power. Democracy can only, only work if people take power.