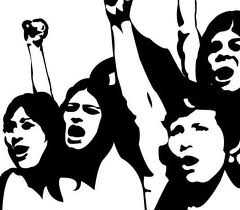 Eleven women remain on a hunger strike in front of the White House.   (Image from lamujerobrera.wordpress.com)

Almost a dozen women from El Paso, Texas, are on their fourth day of a hunger strike in front of the White House.

The women, from the group La Mujer Obrera (LMO), launched the action to do more than just protest the violence and poverty in the Southwest border region. They want the administration to shift away from its sole focus on border security and start paying attention to what local communities can do to boost the economy in the area.

The grassroots nonprofit, founded in 1981, works on economic development in the region and advocacy for Mexican migrant women workers (video below). According to press liaison Rubi Orozco, the women plan to strike for one week but are prepared to remain indefinitely, depending on how meetings go with lawmakers and federal officials. A group of nurses from Washington, D.C., has volunteered to check on the conditions of the women throughout the hunger strike.

While billions are being spent to secure the border, La Mujer Obrera underscores the root causes of instability. Orozco told In These Times that long-term community development in communities along the region’s 2,000-mile border is needed to fight poverty there:

We believe border security needs to be balanced. Right now it’s focused on a militarized approach based on fears.

We have money coming to border, building walls and more federal agents. Those are band-aids.

The root causes of instability need to be tackled – which is impoverishment on both sides of the border.

If you want genuine security you need genuine economic security.

Cindy Arnold, support coordinator for the hunger strikers, told La Jornada, that although the women are still waiting for a response from the White House, they have several meetings scheduled with government agencies to discuss the possibility of a community-led development commission for the Southwest border region.

They want to it modeled after the Appalachian Regional Commission, established in 1965. The ARC is a federal, state and local government partnership that works for sustainable community and economic development in Appalachia, and is composed of the governors of 13 Appalachian states along with local participation from each state.

Said Orozco, “We have a large concentrated poverty region covering different states along a 2,000-mile border. We need an interagency of several states to bring these communities a better quality of life and not impose outside development.”

Four U.S. states span the border between the U.S. and Mexico: California, Arizona, New Mexico and Texas. The Mexican states are Baja California, Sonora, Chihuahua, Coahuila, Nuevo León and Tamaulipas. There are 42 border crossings along the border.

The women want to call attention to solutions that they are creating along the border, built “with our sweat and tears,” Orozco said. “Here in front of the White House, they can’t ignore us,” hunger striker Lorena Andrade told the El Paso Times.

During the past few years the nonprofit La Mujer Obrera has renovated four abandoned garment factory buildings. In the buildings is a development program for women workers, a daycare center, a marketplace and a restaurant to help women break free of poverty and domestic violence.

But lack of financial support is putting the program in jeopardy.

Their marketplace in El Paso, Centro Mayapan, opened 18 months ago and has a Fair Trade import company called Lummetik Trading Company, operated by the women and showcasing work created by women artisans in Mexico. Centro Mayapan is a traditional indoor market that offers and artisan crafts, fresh groceries, dried goods, and a food court that serves food representing various regions of Mexico.

“This creates jobs and training for women in Mexico and ensures that their communities are stable. This way women don’t have to migrate to find work,” said Orozco.

“We want to bring public and political attention on the importance of investing in community development," said Arnold.

One of poorest regions in country

According to LMO’s position paper, El Paso and other border states have suffered severely because of NAFTA and global economic integration, with more than 35,000 jobs moved to countries with lower wages.

Arnold said the government has focused solely on buffering security at the border, but that “we women say true security is a sustainable community and a dignified life.”

"We don’t want outside industries to come and then leave when they find cheaper labor," Orozco said. "We want something future generations will have.”