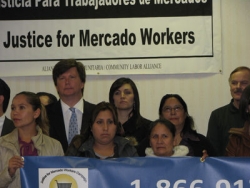 The Justice for Mercado Workers Campaign holds a press conference in San Jose, Calif., in December 2009.   (Photo via People's World)

SAN FRANCISCO—More than 50 former workers at a now-defunct supermarket chain in Santa Clara County (aka Silicon Valley and San Jose) are suing their former employer for unpaid wages.

The two-store chain went bankrupt after being open less than three years and  receiving half a million dollars in assistance from the city’s economic development department. The announcement came from the Bay Area Justice for Mercado Workers Coalition and San Francisco-based Instituto Laboral de la Raza (ILR). (Mexican grocery stores are known as "mercados.")

The workers are seeking more than $200,000 in unpaid wages and penalties. The former Su Vianda workers were fired last June. Marc L. TerBeek, general counsel for ILR, is representing the group.

TerBeek said in a prepared statement that they are suing the listed owner of the chain, Kimomex; the president, Al Lujan; the board of directors; the parent company, Pacific Community Ventures, along with its board of directors, because

...Kimomex's efforts to evade responsibility for their claims by filing bankruptcy revealed that it was a shell organization that did not maintain any books or records, and which could not account for any revenues it had generated, including a $500,000 investment the City of San Jose made in 2008 with taxpayer funds.

According to the complaint, Kimomex, doing business as Su Vianda, owned and operated a chain of ethnic-oriented supermarkets that catered to predominantly Latino customers.

The suit says the workers were denied rest periods, meal breaks and overtime pay, while Su Vianda/Kimomex deducted earnings for medical insurance that was never purchased and engaged in “the unlawful business practice of failing to pay final earned wages to employees it terminated.”

When the workers were fired in June 2010, Kimomex sought bankruptcy protection but then could not account for its liabilities or assets, nor were there corporate books or records.

The supermarket chain did not pay final earned wages to workers it terminated and deducted wages for medical insurance that was never obtained. The workers were told they were not entitled to rest period and meal breaks.

The workers are calling for a jury trial.

Calls to Kiromex's San Jose headquarters were unanswered. TerBeek says the workes are owned at least $75,000 in unpaid wages and $150,000 in penalties for failure to pay them as promised.

The Coalition of Bay Area Mercado workers includes community, labor and faith-based groups who are looking at ethnic grocery stores, commonly called “mercados” to comply with state and federal laws for workers as well as to help them fight for their right to form a union.

Local 5 President Ron Lind remarked during a press conference in December,  “We have a broader mission in the labor movement and as a union. That is to advocate on behalf of all the workers in the industries we represent, including those in the mercados [Mexican markets]…”

About 30,000 Californians work in mercados throughout the state, many of them recent immigrants from Latin America and Asia.

The Justice for Mercado Workers Campaign, which consists of several community organizations and USCW Local 5, has developed a Code of Conduct to empower Latino and Asian mercado workers through labor organizing activities.

In the Bay Area, it is estimated there are some 12,000 mercados workers. Many are paid poverty wages, and their employers don’t observe labor law, which means they don’t get meals and rest breaks, and endure verbal, and sometimes physical, abuse.