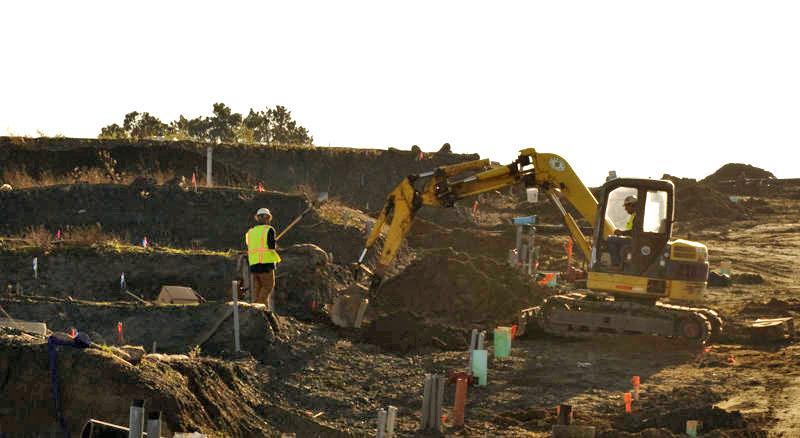 SAN FRANCISCO—A judge here is set to hear arguments today (Thursday) that the city of San Francisco and the Lennar Corporation failed to disclose the potential health impacts of development in Hunters Point Naval Shipyard, one of the most polluted superfund sites in the nation.

The plaintiffs are challenging whether the EIR for the planned development is adequate, accurate or complete in analyzing the health impacts (see video below) from toxic contamination at the site. The suit calls for Lennar and the City of San Francisco to comply with the California Environmental Quality Control Act (CEQA).

“I live just a skip and a half from this Superfund site. All we have asked for is clean air, to protect us in our neighborhoods. And [former mayor Gavin Newsom], the health department, they just turned their heads like we do not even exist,” Bayview resident Vivian Donahue said at a meeting.

“It is our hope that we are able to stop that process because of the way in which (the EIR) was improperly pushed through. There were no safeguards put in place,” said Marie Harrison, a longtime Bayview resident with environmental justice group Greenaction.

Nationally acclaimed scientist and MacArthur Genius award winner Wilma Subra of the Technical Assistance Services for Communities, has been working with SLAM for some time now. Subra consults with communities across the country dealing with pollution issues. She has been investigating the potential human health and environmental impacts of the oil spill in the Gulf.

In 2010, the Environmental Protection Agency assigned Subra to evaluate the draft Bayview EIR. She concluded that there was “a lack of adequate oversight and enforcement that could result in exposure of humans and the environment to hazardous materials on the sites and potentially flawed remedies being implemented.”

She raised serious concerns before it was approved, including that protections cited in the SF Redevelopment Agency/Lennar EIR were not enough to protect residents, students and workers from the dangers of toxic materials.

For years many, Bayview residents, their allies, and environmental activists have sounded the alarm that Lennar was failing to disclose the health impacts of toxic contamination on the Shipyard to residents and to workers. They’ve fought to stop exposure to dust containing asbestos that settled over the area when workers started excavating and grading one of the parcels in 2006 and 2007 without proper air monitoring systems.

When Lennar started grading a hillside, heavy equipment breaking the serpentine rock in the hill released plumes of naturally occurring asbestos. Nearby residents complained of bloody noses, headaches, breathing problems and increased incidents of asthma attacks, as detailed in this video:

Eventually, enforcement actions were levied against Lennar by the Bay Area Quality Management District (BAQMD) and the SF Dept. of Public Health, for hundreds of violations. Lennar was fined $515,000 by the BAQMD. It was the highest civil penalty ever assessed for dust mitigation in the state of California.

Meanwhile, on March 21 the Stop Lennar Action Movement (SLAM) Coalition of Bayview Hunters Point Community Organizations, and New Orleans-based Advocates for Environmental Human Rights released information about one thousands of e-mails from 2006 to 2009 between EPA Region 9, the SF Health Dept and the Lennar Corporation (as well as its consultants), obtained through a Freedom of Information Act request.

They say the e-mails show collusion and conspiracy to manipulate facts regarding asbestos exposure from construction work at Hunter’s Point Naval Shipyard.They are calling for a full investigation into public corruption.

The e-mails, which can be seen here, appear to show that some San Francisco public health officials and some members of EPA9 developed a cozy relationship with the Lennar Corp.

For instance, in one e-mail an official at EPA Region 9 wrote to an environmental consultant for the Lennar Corporation, regarding the Hunter’s Point asbestos re-analysis conclusions:

I’m not sure how to create a basis for the conclusions however, for the general public. The information in the first set of points is appropriate for government/industry types, but I’m searching for a way to justify that the development is acceptable without getting into details of risk assessment…. I’ll try and clarify a few things so we’re on the same page as we massage the message.

As noted by POWER on its website: *Following this e-mail, Mark Ripperda, EPA Region 9 Remedial Project Manager, repeatedly stated in public forums and meetings with local officials that EPA sees no reason to stop the Lennar Corp.’s redevelopment project at the Hunters Point Naval Shipyard. Ripperda’s statement served as justification for the City of San Francisco Planning Department to draft an EIR in support of the redevelopment plan by the Lennar Corp. and a majority of the County Board of Supervisors to approve the EIR.

And in another e-mail dated Oct. 13, 2006, from an SF Public Health Dept. official to two Lennar Corp. employees:

I’m sure you will also want to change my wording on how I portray the problems, lack of monitors, etc. Go ahead and change any way you want. I may change some of it back but I’m willing to read your versions. As noted, don’t bother adding the worker monitoring information. I don’t want to use it… if specifically asked in a public meeting, I will be willing to verbally state the facts related to worker monitoring. …

The Health Dept. says it is looking into the issue. Regional Administrator for the EPA Jared Blumenfeld stated, "I take these allegations very seriously. Today, I initiated a comprehensive review of the entire matter." And Lennar Urban Vice President Kofi Bonner stated: "Nothing in these emails suggests any data was hidden, altered or covered up.”

SLAM and AEHR, a coalition of residents, environmental justice activists and worker rights organization are calling on the FBI and the Mayor’s Office, the Board of Supervisors and the California State Attorney General Kamala Harris launch a full investigation into alleged public corruption involved in the Lennar Corporation redevelopment of the Hunters Point Naval Shipyard.

We want to know what is in the ground that the children of Bayview will be playing in? What will be in the air that our children will be breathing? What will workers be subjected to? These are basic questions that Lennar and the City simply have not been willing to answer.

The area was a working naval operation from 1941 to 1974. It was the site of Naval Radiological Defense Laboratory, involved in the decontamination of ships exposed to atomic weapons testing. Experiments were conducted on radiological decontamination and the effects of radiation on living organisims and materials. In 1989 the Shipyard was designated as San Francisco’s only Superfund site.

Stated Dr. Ahisma Porter Sumchai at a hearing over the EIR before the Board of Supervisors in 2009,  “We have people in the room who represent the health department who make statements about health effects at a federal superfund site that are contrary to what the research shows us. “

Meanwhile, the lawsuit says that the contaminants on the Shipyard put construction workers involved in remediation or redevelopment at risk of exposure as well as nearby residents, and children, staff and visitors in nearby schools.

Although cleanup by the Navy has been ongoing, the area is heavily contaminated with fuels, pesticides, heavy metals, PCBs, volatile organic compounds, radioactive materials and naturally-occurring asbestos.

Last year Dr. Wilma Subra testified before the SF Board of Supervisors about the inadequacy of the report in addressing the potential health impacts of the Lennar development at the Superfund site. She expressed concern over residents and construction workers exposure to toxins.

Subra told In These Times when she was in San Francisco in December: