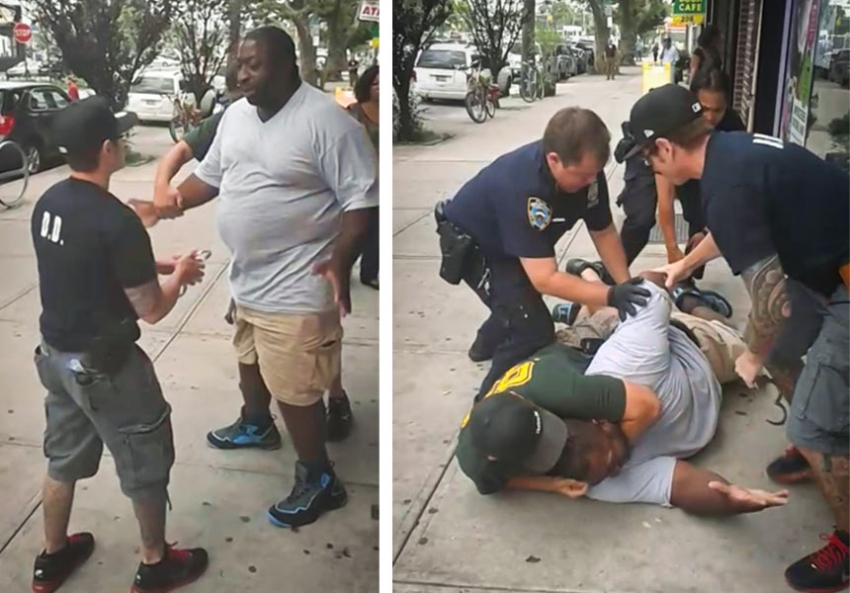 The chokehold is only half the story of homicidal violence.

Even when used alone, extended prone restraint—placing a suspect facedown, hogtied or with hands cuffed behind—has caused untold in-custody deaths by suffocation and is therefore prohibited by many police departments, including the NYPD.

Update: On Aug. 19, 2019, the NYPD announced it had fired Daniel Pantaleo​, the police officer who put Eric Garner in a chokehold.

When New York City police arrested and subdued Eric Garner, he fit a profile: an uncooperative black man committing a petty crime. But the profile that police should have recognized—and the one that Garner fit perfectly—was of someone vulnerable to a dangerous combination of banned law enforcement practices used routinely across the country with impunity, and sometimes fatal results.

Contrary to conventional wisdom, it was not the chokehold alone that killed Garner. And it was not solely Officer Daniel Pantaleo who was responsible for the homicide of the unarmed 43-year-old African-American man arrested for a “quality-of-life” offense under “broken windows policing” that encourages arrest for even the most trivial crimes—in Garner’s case, selling “loosies,” unpackaged cigarettes, on a Staten Island street.

The video of his death, which went viral and sparked protests, shows Pantaleo’s arm tightened around Garner’s neck. It also shows a cluster of officers, including Pantaleo, kneeling on Garner’s back and pressing his face, mouth and nose to the pavement as he lay facedown, hands cuffed behind him, pleading— at least 11 times—“I can’t breathe.”

The Office of the City Medical Examiner ruled Garner’s death a homicide, citing both “compression of neck (chokehold) [and] compression of chest and prone positioning during physical restraint by police.”

First, about the chokehold: According to his lawyer, Pantaleo told the official inquiry he “never exerted any pressure on the windpipe.”

His denial, even if true, is largely irrelevant. There are two main types of chokeholds, and during a struggle, one may easily slide into the other. Pressure to the windpipe—an air choke—directly cuts off the ability to breathe and can kill quickly. Pressure to the veins and arteries of the neck—a blood or carotid choke—stops blood flowing to and from the brain and cuts off its oxygen.

Both holds can kill, and that is why, back in 1993, the NYPD banned them. Chief John F. Timoney, then commander of the department’s Office of Management Analysis and Planning, said: “Basically, stay the hell away from the neck. That’s what [the policy] says.”

And then, Garner’s second cause of death: positional asphyxia caused by “compression of chest and prone positioning.” Even when used alone, extended prone restraint—placing a suspect facedown, hogtied or with hands cuffed behind—has caused untold in-custody deaths by suffocation and is therefore prohibited by many police departments, including the NYPD. But when officers also kneel or push on the restrained person’s back or neck, as they did with Garner, the danger of positional asphyxia escalates. And when the suspect has been pepper sprayed, is intoxicated or has medical conditions such as Garner’s—obesity, asthma and a weak heart—the danger skyrockets.

Dr. Michael Baden, former NYC chief medical examiner and later State Police chief forensic pathologist, who was hired by the Garner family to review the autopsy report, told the New York Times: “Obese people especially, lying face down, prone, are unable to breathe when enough pressure is put on their back. The pressure prevents the diaphragm from going up and down, and he can’t inhale and exhale.’’

The cell phone video shows that even after Pantaleo released the chokehold, and Garner was cuffed, hundreds of pounds of cop flesh pushed down on him. His struggle against that weight was evidence not of vitality and aggression, but rather of desperation to change position so that he could breathe.

“The natural reaction to oxygen deficiency occurs—the person struggles more violently,” a 1995 National Law Enforcement Technology Center bulletin warned. The struggle aggravates the asphyxia by increasing the heart rate and causing carbon dioxide to build up in the lungs.

Ill-trained or angry police who double down on restraint when a handcuffed captive thrashes are clearly violating procedure. “As soon as the suspect is handcuffed, get him off his stomach,” the NYPD’s Guidelines to Preventing Deaths in Custody state. “Turn him on his side or place him in a seated position. If he continues to struggle, do not sit on his back.”

The fact that Garner had medical conditions increasing his vulnerability to positional asphyxia was not readily knowable. But that he was obese and struggling to breathe—even after the chokehold that compromised him was released—was obvious. That, once handcuffed and down, he was not immediately turned over or allowed to sit up was both a violation of long-standing policy and, ultimately, homicidal.

And by failing to act after Garner became comatose, police further violated policy—and possibly the law. The NYPD patrol guide warns that officers are required to “intervene if the use of force against a subject clearly becomes excessive. Failure to do so may result in both criminal and civil liability.”

“He didn’t die because he stopped breathing on his own,” said his sister, Ellisha Flagg. “He died because someone took his breath away.”

And the EMTs who arrived on the scene made no effort to give it back. Faced with the limp, unconscious man, they were bizarrely passive, failing to apply an oxygen mask, to ensure  that Garner’s airway was clear or to assess his condition in any way beyond seeking a pulse.

Prone restraint and resulting positional asphyxia have been implicated in numerous in-custody deaths on the street and in prisons. And if police departments are unmoved by compassion, they might consider liability. Even though officers escape criminal charges, civil courts have levied millions of dollars in settlements.

In 2013, Ethan Saylor, who had Down syndrome, refused to leave a Maryland movie theater because he wanted to see the film again. Three off-duty sheriff’s deputies forcibly removed the 294-pound disabled man. “They placed him [facedown] on the ground,” his mother Patti testified before a Senate committee, “prone restraint, put handcuffs on, and my son died of asphyxiation on that floor of that movie theater for that $10 movie ticket.”

Police used prone restraint on: Jonny Gammage, a Pittsburgh man, at a traffic stop; Charles Dixon, an Altoona, Pennsylvania man, after a disturbance at a birthday party; Oral Brown, who was found wandering disoriented in Fort Lauderdale, Florida after his car crashed; and Tanisha Anderson, whom Cleveland police were taking for a mental-health evaluation after her parents reported she had disturbed the peace. All died from positional asphyxia in what amounts to institutionally protected homicide.

In 1999, Brian Drummond, who was unarmed and mentally ill, ended up inva permanent vegetative state after cops subdued him. “Although he had offered no resistance, Officer Brian McElhaney put his knees into Mr. Drummond’s back and placed the weight of his body on him. [Officer Christopher Ned] also put his knees and placed the weight of his body on him, except that he had one knee on Mr. Drummond’s neck,” the Drummond v. City of Anaheim trial transcript noted. Drummond “repeatedly told the officers that he could not breathe and that they were choking him.” One eyewitness testified, “The officers were laughing during the course of these events.”

The 9th Circuit Court concluded in 2003: “The compression asphyxia that resulted appears with unfortunate frequency in the reported decisions of the federal courts, and presumably occurs with even greater frequency on the street.”

More than a decade later, it seems little has changed. Acts of commission and omission by each of the many police who participated in or witnessed Garner’s arrest represent not only individual culpability, but a systemic failure of training or compliance.

It was “all the police [on the scene], not just one police officer, that would have caused the obstruction to breathing,” forensic expert Michael Baden told Fox News.

By blaming only the chokehold, Pantaleo’s fellow officers and much of the media threw one cop under a bus that carries a heavy cargo of ignorance, aggression, profiling, and needed reform.

The NYPD officers who petulantly turned their backs on the mayor and held work slowdowns added to the impression that the force is out of control, and left the public justifiably wary of trusting police with their lives.