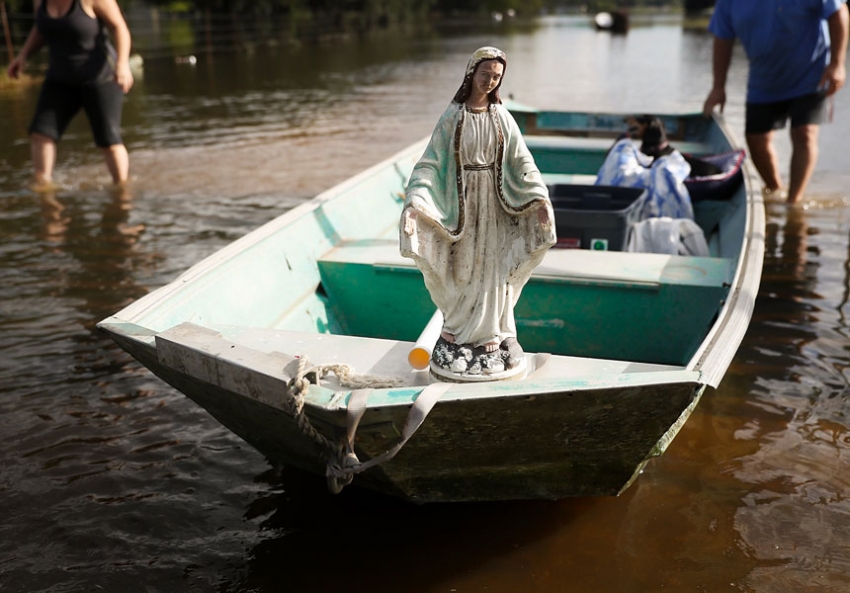 We shouldn’t write off poor conservative voters for not voting their interests. Instead, we should understand why. (Joe Raedle/Getty Images)

The Stories We Live By: Why the White Working Class Votes Conservative

In Strangers in Their Own Land, sociologist Arlie Russell Hochschild travels south to study what gives conservative ideology its power.

More than one person tells her that environmental concerns are pointless, since the second coming of Jesus and subsequent total destruction of the Earth will make it irrelevant. About 40 percent of Americans believe Jesus will return by 2050.

Class analysis is suddenly all the rage. For progressives, the disconnect between the white working class’s economic self-interest and its identification with the GOP was already baffling. Now, Donald Trump’s success has inspired a flurry of investigations into the divides that render our separate tribes mutually incomprehensible.

In 2004, Thomas Frank offered the most influential explanation of the GOP’s appeal to the white working class, arguing in What’s the Matter with Kansas? that Republicans had pulled off a huge con: They used culture-war issues to win votes, then used that political capital to pursue a radical free-market agenda.

In Strangers in Their Own Land, Arlie Russell Hochschild, a distinguished sociologist at the University of California-Berkeley, brings the tools of journalism and scholarship to bear on the question of class and political affiliation. She acknowledges a debt to Frank’s work, but she believes it and similar analyses overlook something vital: the lived experience of conservatives in modern America. That is, they don’t capture the “deep stories” about self and society that sustain identity and give conservative ideology its power.

Such deep stories are at the heart of Hochschild’s project. The book begins with a vignette of her chewing on a stick of sugarcane and talking with a man who’s remembering the long-gone settlement where he grew up. “You had community” back then, he tells her. “You know what’s undercut all that?” His answer: Big Government. The book closes with another friend telling her, as they part during their last visit, that they will meet again someday in heaven.

Southern Louisiana has been the site of Hochschild’s research for the past five years. She immersed herself in some of its conservative communities, befriending Tea Party types, getting to know their stories and breaking down the “empathy walls” that separate progressives from conservatives. “Our polarization,” she writes, “and the increasing reality that we simply don’t know one another, makes it too easy to settle for dislike and contempt.” Her premise is that there is value in understanding other people’s deep stories—walking a mile in their shoes—even if there is little hope of affecting their votes.

The subtitle of Strangers is “Anger and Mourning on the American Right”—a subtle play on Ronald Reagan’s “Morning in America”—and there is a certain ache that runs through the book.

The pain of southern Louisiana isn’t, as in the Rust Belt, about the disappearance of jobs and the decline of an industrial base. Business, especially the oil and petrochemical industry, is, in fact, booming. Industry has moved there because of the state’s natural advantages and because former GOP governor Bobby Jindal and the state legislature pushed through big tax breaks and fostered a culture of lax regulation, so that companies rarely pay for their negligence.

Instead, the ache has to do with the devastation that comes with industry. Many of the people Hochschild got to know have lost their health, their homes, even their towns. Some have lost multiple family members to cancer—a hazard, they speculate, of living too close to the industrial plants. Everyone knows more devastation is coming, and they aren’t duped about its sources. It’s plain for all to see that industry pollutes with impunity and Republicans always side with industry.

Hochschild calls this the great paradox of Louisiana. Though the people say they want clean air and water, they vote for more tax cuts for business, less regulation, more pollution, more disinvestment in public resources.

The state’s pervasive religiosity does play a role. Hochschild notes the town of Lake Charles, with a population of 70,000, supports about 100 churches. More than one person tells her that environmental concerns are pointless, since the second coming of Jesus and subsequent total destruction of the Earth will make it irrelevant. About 40 percent of Americans believe Jesus will return by 2050, according to a 2015 Pew poll, which helps explain why environmental issues are a low priority.

But that belief is only one tiny piece of a much more complex picture. Strangers methodically builds the case that there are deep, multi-layered stories at work in the lives of the people whose conservative politics grip the region. Within those stories, religion is less a license to destroy the planet than a grounding force for moral striving and community. As Hochschild writes: “Being Christian and taking Jesus as your savior was … a way of saying, ‘I commit myself to being a moral person. I daily try to be good, to help, to forgive and in fact to work hard at being good.’ ”

Why have the Democrats lost such people? Hochschild shows that in the deep story they live by, industry is the lesser of two evils. For all the havoc it brings, it also creates jobs that provide people with work, meaning and a way to support themselves. Meanwhile, government is perceived as the greater evil, coddling and giving breaks to the people who get ahead without putting in the hard work—the “line cutters,” in the shorthand that Hochschild uses, or the “takers” in the epithet favored by the Tea Party. This makes conservatives’ sense of loss double-barreled: Industry destroys their land and their health, while government and progressivism shatter, they believe, the old moral frameworks and rules of fair play. The result is a vicious cycle of dysfunction. Anti-government anger leads to deregulation of industry, which is then free to inflict more havoc, which intensifies the sense of loss and anger, which is then directed primarily at the government.

Louisiana is a near-worst-case scenario, ranking next to last among the states in an index of human development. But, as Hochschild rightly notes, the state’s story is increasingly relevant “as the multinational companies that roam the globe become more powerful than the political states vying for their favor.”

Hochschild devotes an appendix to “fact-checking common impressions” that she heard during the course of her fieldwork—for example, the “fact” that black women have more children than white women, and that government employees make up 40 percent of the workforce. These are all greatly exaggerated or flatly untrue. (The fertility rate for white and black women is about even, and workers at all levels of government combined make up less than 17 percent of the workforce, even with the military included.) But the upshot of the book is a reality that Fox News and the rise of Donald Trump have made inescapable: Facts are often impotent, pitched against the deep stories, commitments and (un)truths that people actually live by. In politics as in love, the heart has reasons that reason cannot know.

It is a discouraging truth to hear. But we are indebted to Hochschild for her patience, intelligence and generosity of spirit in telling it.