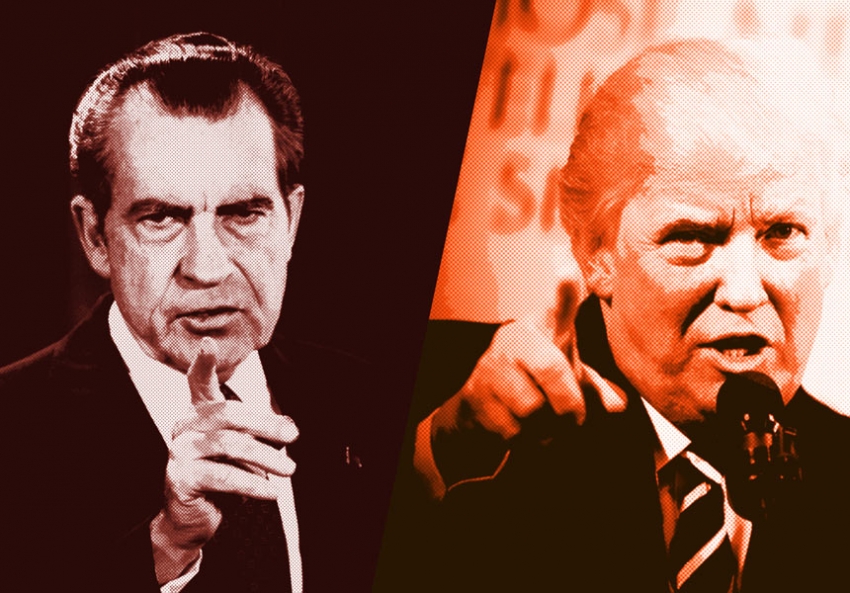 The similarities between our current president and Tricky Dick don’t bode well for the country—or for Trump.

We have seen some of this before. That does not mean we can simply ride this out.

As I stood in the middle of the defiant, buoyant, multi-generational, multi-hued, multi-gendered Women’s March in Washington, D.C., on January 21, I said to my friend, the political organizer and LGBTQ activist Chris Armstrong, that the energy reminded me of the Vietnam Moratoriums, like the November 1969 event bringing an estimated 500,000 people to Washington. Chris responded, “Well, Trump reminds me of Richard Nixon.” I was instantly struck by how right he was. There is much here that we have seen—and fought—before.

Probably the biggest difference between Nixon—one of our most disgraced presidents—and Trump is that Nixon had political experience, for what that was worth. But the similarities are striking, and while they are chilling to us, they really don’t bode well for Mr. Trump.

First, there is his notoriously thin skin, the desperation to be liked, the visceral resentment of criticism, leading to the impulse to strike back at critics in multiple ways, legal and illegal. These traits constitute the core, and the Achilles’ heel, of both men.

And they fuel the deep hatred of and paranoia about the news media, and the incessant attacks on them. Spiro Agnew’s repeated assaults on the press as misrepresenting the facts, as committing “slander” against Nixon, as being hostile and as being members of “the most unrepresentative community in the entire United States” are of a piece with Steve Bannon’s calling the media “the opposition party.” To Agnew, reporters were also, famously, the “nattering nabobs of negativism,” with the television networks representing “a concentration of power over American public opinion unknown in history.” Trump is not so alliterative; he just says “fake news.”

Then, of course, there were the efforts at censorship, most notably in the failed attempt to prevent the New York Times from publishing the Pentagon Papers. Bannon just said simply that the media should “keep its mouth shut.” Nixon and Agnew—before the latter had to resign because of tax evasion charges—successfully launched the mantra of the elitist, “liberal” media that persists to this day.

Nixon, like Trump, was a racist, an anti-Semite, a misogynist and a homophobe, and this absence of empathy crippled his ability to read and lead the country. Black people, according to Nixon, could never run a government, and Washington was “full of Jews”—you “can’t trust the bastards. They turn on you.” (Henry Kissinger and a few others were exceptions.) Mexicans “steal” and are “dishonest” but they “don’t live like a bunch of dogs, like the Negroes do.” Women should not “be in any government job whatever” because they’re “erratic and emotional.” Gays “have a problem” and once a society accepts them, “the vitality goes out of that society.” How to deal with blacks and hippies? Launch a “war on drugs” to “disrupt both communities,” as Nixon aide John Erlichman revealed. With Trump (according to a tell-all by a former employee, he once said, “The only kind of people I want counting my money are short guys that wear yarmulkes”), the homophobic Mike Pence, and the racist and anti-Semitic Steve Bannon at the helm, we’re back to 1970. Of course, the big difference is that Nixon expressed these views in private. Trump blares them at rallies and on Twitter.

So we have seen some of this before—just not so nakedly. That does not mean we can simply ride this out. Because here’s what’s different: From the time Nixon took office, people were in the streets, and—in addition to the Civil Rights and anti-war movements—launched an environmental movement, a women’s movement and a gay rights movement, all of which built liberal and progressive institutions. The Democrats controlled Congress. Investigative journalism was flowering. Today demands ongoing resistance, intense pressure on Congress (and a new one in 2018), revived progressive coalition-building and a questioning, aggressive press to thwart Trump’s paranoia-driven efforts at repression. While it’s much too soon to think of Nixon and then utter the word “impeach,” “impede” is what we can do, every day.