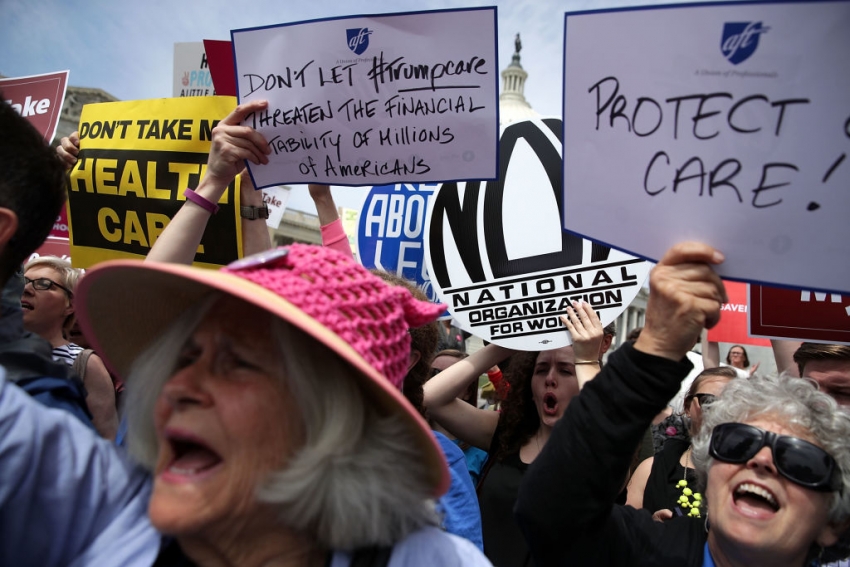 The GOP’s healthcare bill, which passed the House last Thursday, now moves to the Senate. (Photo by Alex Wong/Getty Images)

Resister’s Digest: Trumpcare Bill Unleashes the Fury of the Left

Donations pour in to target vulnerable Republicans after House vote.

'The country is at a point where I think it believes in universal coverage.'

The GOP’s healthcare bill, which passed the House last Thursday and now moves to the Senate, has sparked a massive wave of donations to progressive and Democratic organizations. Swing Left, which is raising funds to target the 35 most vulnerable Republicans who voted for the bill, reported that it had received about $850,000 in donations from 20,000 people in the day following the vote. That’s about four times more than the total it had collected since its launch on April 13. The website Daily Kos, which is targeting 24 GOP incumbents in districts where Trump’s share of the vote was less than 50 percent, received $800,000. In the wake of the House vote, the Cook Political Report changed its 2018 forecast for 11 House seats from “likely Republican” to “leans Republican.” It changed three seats from “leans Republican” to “toss up.”

In addition to donations, blowback to the GOP’s bill is finding various outlets:

5calls.org simplifies the process of calling Congress by offering scripts about a wide range of issues, and by providing the phone number of relevant politicians and agencies, customized to your zip code. Scripts that focus on demanding a town hall from your representative and protesting Trumpcare are at the top of the list. There are also scripts devoted to the Paris climate change agreement, net neutrality and more. The site links to articles that explain why phone calls are, by far, the most effective way to influence Congress.

The Global Divestment Mobilization continues this week. Last week’s actions included testimony by DC ReInvest activists at a Washington, D.C., Council budget hearing, where they urged the finance committee chair to schedule a hearing on divesting from Wells Fargo because of its investment in the Dakota Access pipeline.

Meanwhile, there is some small progress in forcing Congress to take climate change seriously: “A bipartisan bill introduced in the U.S. House on Thursday would create a commission to look for economically viable solutions to climate change,” Inside Climate News reported. It noted that “amid the pro-fossil-fuels push by the Trump administration, the effort reflects how a small but increasingly vocal group of Republicans is embracing the reality of climate change and pressing the issue in Congress through modest steps.”

Indivisible Chicago and several other organizations are sponsoring a symposium on Tuesday, May 16, that focuses on how to elect more women and people of color. There will be speakers, breakout discussion sessions and a networking fair. General admission tickets are $25. Details here.

MoveOn.org is organizing a “resistance summer” to develop “community leaders and activists who want to gain organizing skills and be part of an ongoing national network of organizers standing up to Trump's agenda.” The program’s trainings will focus on topics like developing a campaign strategy and attracting media coverage, and its actions will focus on building relationships within communities. Each participant will also be part of a group of 25 “mobilizers” who take on a specific project. The time commitment is about five hours per week, and the program runs from mid-June to early September. Applications are due by May 22. Find details here. Apply here.