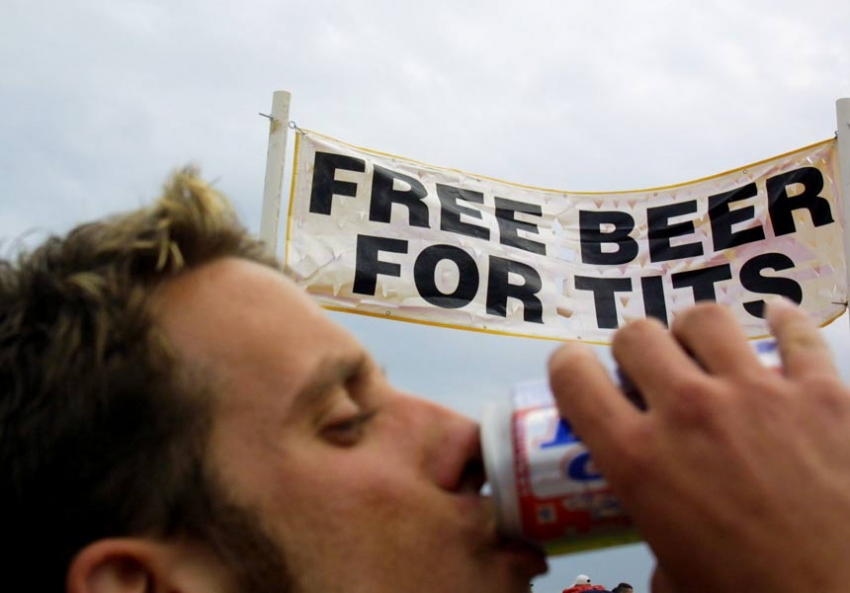 A man drinks a beer on a Texas beach during Spring Break. (Photo by Joe Raedle/Newsmakers)

Why Toxic Masculinity Hurts Men as Well as Women

Feminists and progressives need to highlight toxic masculinity’s poisonous effects on not just the marginalized, but men as well.

One norm most “consistently and robustly” associated with negative mental health was the desire for “power over women.”

Toxic Masculinity. Google the term—which refers to a version of manhood predicated on stoicism, domination of others, sexual aggressiveness, violence and misogyny—and more than 500,000 hits pop up. The concept has been gaining currency in the past year or so, what with our pussy-grabbing predator-in-chief installed in the White House, Bill Cosby eluding justice for serial sexual assault, cops getting away with murdering unarmed boys and men of color, chronic mass shootings by disturbed men with guns, a congressional candidate coldcocking a journalist and still getting elected, and a rogue, callous Congress seeking to further strip women, children, the poor and the elderly of whatever remaining control they might have over their health. In February there was yet another lethal fraternity hazing, when Timothy Piazza at Penn State was urged to overdose on alcohol and sustained fatal injuries after a fall because his “brothers” refused to call an ambulance. Virulent trolling of women, especially feminists, is now an accepted part of modern life. No surprise, then, that articles in Slate, Forbes, The Atlantic and Playboy, and features on ABC News and Fox News, to name a few, have noted the phenomenon.

While feminists are especially concerned about it, toxic masculinity was not a term we coined. It initially emerged out of the men’s movements of the 1980s and 1990s to refer to what they saw as a narrow, socially constructed version of manhood that compelled men to deny their true feelings and to compete with each other rather than bond.

But the concept also came to be used in social and clinical psychology to analyze how this extreme version of masculinity not only hurts others—especially women, children and gay men—but also how it hurts “toxically masculine” men themselves. Various studies have shown a link between men who embrace and act on toxic masculinity’s behavioral codes and a range of problems, from fraught relationships to depression, alcoholism, rage disorders, assault and other criminal behavior, and suicide. A 2016 Indiana University survey of 78 research projects involving nearly 20,000 participants found that men who embodied stereotypically macho behaviors were much less likely to seek help for such problems and had poorer overall mental health. One norm most “consistently and robustly” associated with negative mental health was the desire for “power over women.” The authors’ summary? Sexism can be harmful to men, too.

The word “toxic” has become a lightning rod for the Right; there has been a backlash against the term as conservatives have distorted it to suggest it’s simply about hating men. When Fox News journalist Todd Starnes learned that some colleges were offering courses designed to understand and combat toxic masculinity (a response, in part, to the rates of sexual assault on campuses), he said they were “trying to convince men to grow lady parts.” The Federalist’s article was titled, simply, “The ‘Toxic Masculinity’ Trend Blames Boys for Being Born Male,” and insists that men’s “innate wiring is wrong, stupid and even toxic.” In fact, researchers are arguing the opposite: that this toxic behavior has nothing to do with innate wiring. Just as the defiant (and racist) “All Lives Matter” retort utterly misses the point about structural racism, so, too, “they hate men” occludes how violence and misogyny can be structured into some men’s lives through violent upbringing, economic hardship and brutal environments or peer relationships.

Misrepresenting what is, in fact, a serious and, yes, culturally constructed, gender-based problem is glib and myopic, especially with a president who luxuriates in, and legitimates, its precepts and encourages others to do so. We may need a better word than “toxic.” But the Right is doing a major disservice to many in its own base through its knee-jerk dismissal of what is a lethal public health problem. Meanwhile, feminists and progressives, while continuing our outrage over violent masculinity’s most frequent victims—women, people of color, children, the LGBTQ community—also need to highlight its poisonous effects on men in general, which is not just strategically important, but crucial to combatting the problem. With Trump’s version of bullying masculinity (which millions of men do not embody and, indeed, many deplore) so ascendant right now, it’s easy to overlook how it does grievous harm not just to the marginalized, but to many men, too.