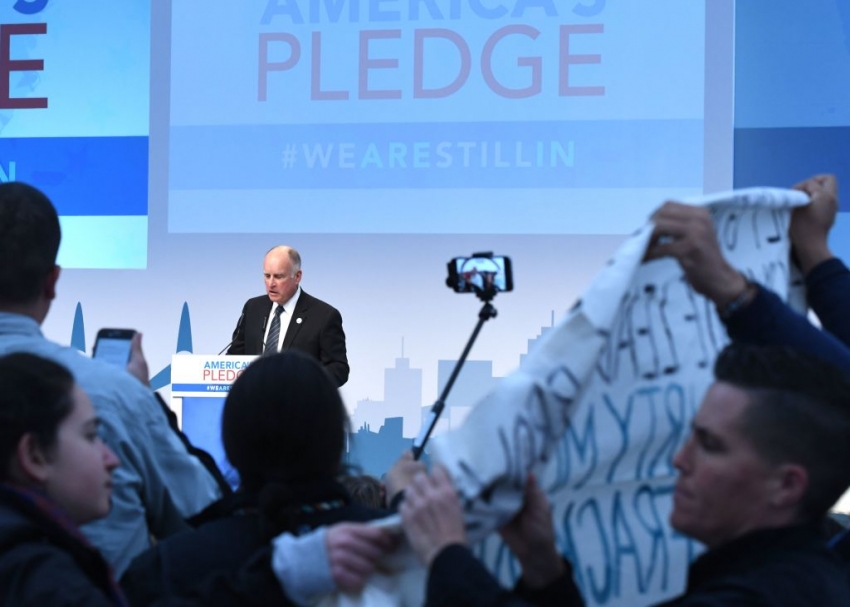 Billionaires were the most optimistic people at COP23.

BONN, GERMANY—Jerry Brown was not at ease, shuffling papers and hastily sipping water before the moderator turned to him. Dressed in a boxy suit, the Democratic governor of California was seated on stage at the U.S. Climate Action Center (USCAC), a flashy, igloo-shaped tent home to a self-styled U.S. shadow government out to work around President Donald Trump’s climate obstinance. They’d come to Bonn for the UN climate talks known as COP23, the first international climate talks since Trump announced he would withdraw from the Paris Agreement.

That morning, a few dozen activists loudly interrupted Brown’s remarks at the opening ceremony, then filed out of the tent to protest the governor’s corporate-backed cap-and-trade program and his support for California’s oil and gas industry.

Brown later gave a boilerplate speech on why Americans should take climate action seriously, and blurted, “By the way, those protesters earlier, they’re wrong on cap-and-trade.”

Right after finishing, Brown interrupted the moderator to address “some of the folks who were giving us trouble.”

“Most of the critics ride around in cars and fly around in airplanes,” he said. “We’re caught up in carbon. Some minds are not subtle enough to appreciate the paradox.” The man sitting next to him on stage—an executive from PG&E, one of the country’s largest private utilities—let out a laugh.

Billionaires were the most optimistic people at COP23. It was easy to feel upbeat amid the comforts of the multi-milliondollar USCAC, bankrolled by former New York City Mayor Michael Bloomberg and a slew of corporate sponsors, many of which had space on stage during the week-plus of programming. There was a free espresso cart, comfortable seating and complimentary copies of Bloomberg’s book, Climate Hope, doled out by bright-eyed young staffers. Main-stage programming featured titles like “Business Leading the Way” and “Bipartisan Solutions to the Climate Crisis.” Despite Trump leaving the Paris agreement, the coalition of politicians and executives in USCAC declared, “We Are Still In.”

The protesters were less sunny. After security escorted them out, those who had interrupted Brown huddled for a debrief in the muddy area outside the tent. Nearly all hailed from the United States, and many from communities dealing first-hand with the impact of the kinds of extraction Brown has been wary of halting.

Eva Malis, 22, took part in and helped plan the interruption. She grew up in Valencia, Calif., and already has experience going head-to-head with Brown. “I’ve spent countless hours trying to get Jerry Brown to stop fracking in California and put a complete ban on it,” she tells In These Times.

Brown has close ties with the fossil fuel industry that go back to his father, former California Gov. Pat Brown, who made a fortune in oil. Both Jerry Brown and the state’s Democratic Party have taken large donations from oil and gas companies. Last summer, Brown worked with them on drafting a watered-down cap-and-trade bill that he spent much of his time at COP23 lionizing as a model.

“Being here as a Californian and seeing Jerry Brown honored as a climate hero is really frustrating,” Malis says. The USCAC that Saturday afternoon was a rough microcosm of the two faces of resistance to Trump’s climate denialism.

The first—headed up by Brown, Bloomberg and company—sees corporations and local governments as capable of confronting climate change, federal mandates be damned. Activists argue that only systemic change, including strict regulations and a democratically controlled renewable energy system, can avert catastrophe. Anything less, they say, will send humanity hurtling along a path to destruction, with working-class communities and communities of color on the front lines.

A few days later, the governor still seemed rankled by the protests. Asked by the Sacramento Bee if he was enjoying himself in Germany, he replied, “No, I hate everything. Why do you ask that silly question?”