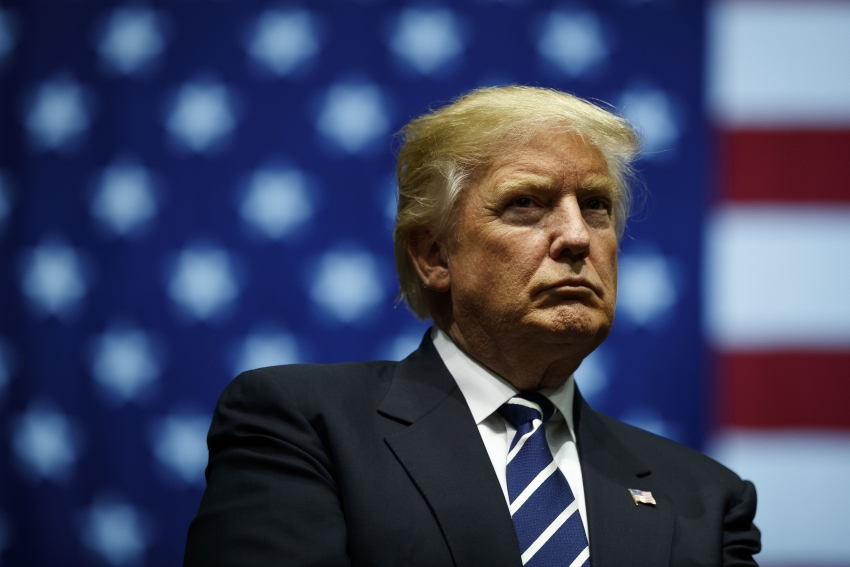 Then-President-elect Donald Trump looks on during a rally at the DeltaPlex Arena, December 9, 2016 in Grand Rapids, Michigan. (Photo by Drew Angerer/Getty Images)

Why Trump’s Muslim Ban 3.0 Is So Dangerous

The new ban shows us what institutionalized Islamophobia looks like during the Trump era of the War on Terror.

By positing Muslims as a threat to the safety and security of the United States — even when they're the victims of a terrorist attack — Trump builds support for the idea that restricting Muslim rights will always be the solution.

Two years ago this December, Donald Trump issued his now infamous statement: “Donald J. Trump is calling for a total and complete shutdown of Muslims entering the United States until our country's representatives can figure out what the hell is going on.”

Nearly a year into his presidency, Trump has sought to put three different Muslim bans into place, with the last now making its way through the courts.

In a December 4 ruling, the Supreme Court decided to allow Muslim ban 3.0 to be implemented while challenges to its constitutionality make their way through the lower courts. In this, the Supreme Court overturned appellate courts' earlier decisions to halt its implementation during the appeal process.

To be clear, this decision was not based on the merits of the case or the ban’s constitutionality. Nonetheless, for many Muslims, it indicates that institutionalized Islamophobia isn't going anywhere anytime soon. In the context of a president and administration that has repeatedly stoked anti-Muslim sentiments, this latest act of state violence is depressingly unsurprising.

Unlike earlier versions of the ban, which initially imposed three-month restrictions on six or seven Muslim-majority countries, version 3.0 indefinitely targets nationals from eight countries. Syrian and Somali nationals are being banned altogether, while nationals from Iran, Libya, Yemen and Chad face a range of restrictions and barriers to entry.

North Korea and Venezuela are also included in the latest ban, as a fig leaf to cover Trump’s expressed intention to target Muslims’ entry to the United States in arguments before the courts.

In the case of the previous bans, the time limits meant that when they reached the Supreme Court, they were essentially moot — no longer in effect. However, because of Muslim ban 3.0’s indefinite nature, it virtually ensures that the court will eventually have to rule on the merits of the ban. Its next action may depend on what happens in the 4th and 9th Circuit courts, which are weighing the constitutionality of the ban.

Meanwhile, the Supreme Court's decision to let the ban go forward will certainly embolden Trump and his base of supporters, who believe that that Muslims are essentially terrorists until proven otherwise.

For instance, it took only hours after Akayed Ullah, a Muslim immigrant from Bangladesh, attempted to bomb New York's Port Authority bus station before White House spokesperson Sarah Huckabee Sanders called for dramatically tightening immigration rules. “The president's policy calls for an end to chain migration,” she said, “which is what this individual came to the United States through. And if his policy had been in place, then that attacker would not have been allowed to come in the country.”

And it wasn't so long ago that Trump re-tweeted inflammatory anti-Muslim propaganda from the British right-wing group Britain First. When British Prime Minister Theresa May protested those tweets, Trump responded by questioning her ability to deal with extremists. Trump bleated that she should “focus on the destructive Radical Islamic Terrorism that is taking place within the United Kingdom. We are doing just fine!”

In short, Trump responded by criminalizing the British Muslim community. Huckabee Sanders later credited the president with “elevating the conversation” around Islam and terrorism, even while acknowledging that videos of alleged Muslim violence in the tweets may have been fake.

And a week earlier, when ISIS killed over 300 Egyptians in a mosque bombing in Sinai, Trump tweeted to heighten domestic fears of terrorism. “We have to get TOUGHER AND SMARTER than ever before, and we will. Need the WALL, need the BAN!” he tweeted.

In other words, he sought to position acts of terrorism by Muslims as proof of the entire group’s propensity to commit acts of violence—even though all 300-plus victims were Muslims as well, and even though Egypt (whose military dictator Trump warmly welcomed to the White House earlier this year) isn't even on the list of banned countries.

In each of these cases, the White House has demonized the global Muslim community to justify extreme measures against them. By positing Muslims as a threat to the safety and security of the United States — even when they're the victims of a terrorist attack — Trump builds support for the idea that restricting Muslim rights will always be the solution.

If the 4th and 9th Circuit courts deem the ban unconstitutional, Trump will almost certainly challenge the ruling. In the meantime, Muslims will continue to face the challenge of being at the forefront of court decisions and the court of public opinion.  What happens next will define the course of the legal system when it comes to Muslims in the Trump era of the War on Terror.