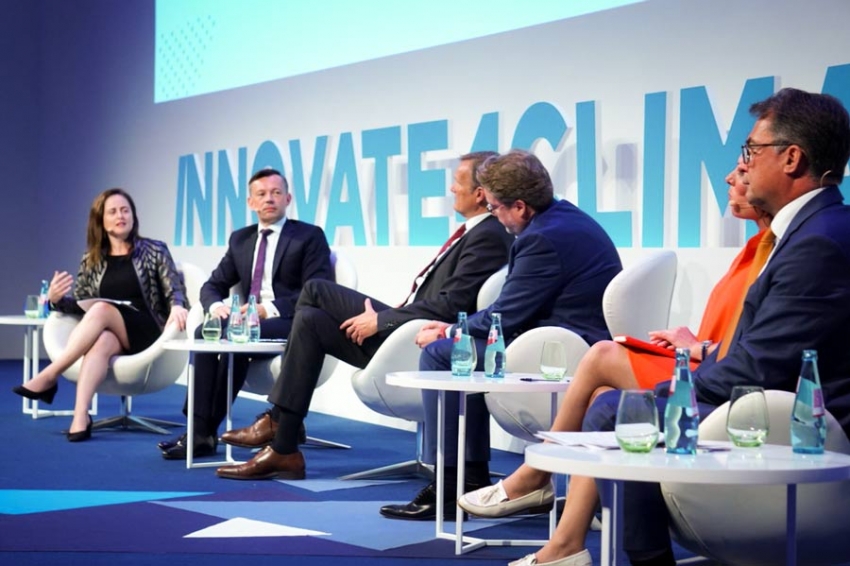 At the World Bank’s Climate Summit, Financiers Trade Carbon While the World Burns

At “Innovate4Climate,” the people destroying the planet gather to congratulate themselves on their climate efforts.

Companies can buy and sell Certified Emissions Reduction credits to allegedly balance out emissions. The problem? Most of those projects are Grade-A bullshit.

FRANKFURT, GERMANY—In a sprawling conference center in the financial heart of continental Europe, 11 sharply dressed speakers squeeze onto a tiny stage. For three days in May, the center plays host to Innovate4Climate, a summit on climate finance and carbon markets hosted by the World Bank and the environment ministries of Spain and Germany. Projected behind the panelists in a digital scrawl that would look more at home at an extreme sports event are the words “Talanoa Stories,” over a picturesque beach scene.

Talanoa is a traditional Fijian word for a mode of inclusive dialogue toward the common good. Since Fiji hosted the 2017 U.N. climate talks last year, it’s also been used to describe the process of assessing proposals for implementing and improving the Paris Agreement.

The panel had a real rearranging-deck-chairs-on-the-Titanic vibe: In the spirit of talanoa, participants were asked to share moments that gave them hope. Jonathan Shopley, managing director of Natural Capital Partners and a founder of the International Carbon Reduction and Offset Alliance, recalled a conversation with an airline executive who, allegedly, needed “just a little more time” and some “incentive” to scale down his company’s considerable carbon emissions—to Shopley, a sign that businesses are eager to help. That conversation was five years ago. Airline emissions have climbed steadily since.

Airlines—with annual carbon emissions roughly on par with Germany—aren’t directly accountable to the Paris Agreement, because attributing air travel emissions to any single country would be a logistical nightmare. They enjoy an astonishing amount of leeway to decide how to rein in their pollution. Starting in 2021, that will happen mainly using carbon offset markets.

Under the auspices of the UN’s Clean Development Mechanism (CDM), companies can buy and sell Certified Emissions Reduction (CER) credits to allegedly balance out emissions. For instance, Germany could pollute at home while buying CERs that fund sustainable forestry in the Global South.

The problem? Most of those projects are Grade-A bullshit. By 2009, an estimated 59 percent of CERs purchased were for projects related to HFC-23, a greenhouse gas made in the production of several household appliances.

Once refrigerator manufacturers realized they could earn credits by simply destroying the gases they produced, they started producing gases just to destroy them, claim the credits and sell them at a profit. This didn’t exactly reduce emissions.

Even the World Bank, which helped develop the CDM, called the offset market “ponderous, costly and ineffective.” Yet, credits have a bright future with airlines—an opportunity offset salespeople aren’t about to waste.

At Innovate4Climate, a harried pitch session to potential investors featured a visibly nervous emissary of something called Climatecoin, which bills its product as the “First Carbon Backed Cryptoasset,” promising to “democratize carbon markets.” Investors, he tried to explain, can now purchase Ethereum (a type of cryptocurrency) that’s tied to CER projects—through their new blockchain-based platform.

This nigh-incomprehensible talk feels like a fever dream, a microcosm of the pervasive fantasy throughout climate policymaking that free markets, rendered efficient via a few price signals, will rescue humanity from catastrophe; that those most responsible for the crisis can simply outsource the problem; that polluters can be coaxed into reducing emissions without robust regulation.

I looked back at the Innovate4Climate website while writing this, and the landing page is triumphant: “Another remarkable success!”