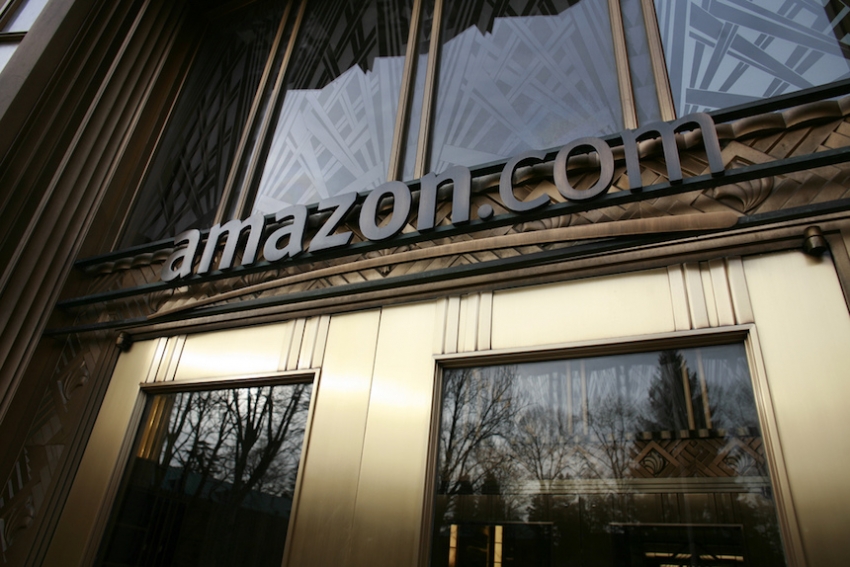 In a $5.5 billion sweetheart deal, Amazon has inserted itself between local businesses and local governments.

Cities and states could end up overpaying for basic supplies, with Amazon profiting on the back end.

The paper the forms are printed on at City Hall. The desk your child sits at in math class. The books in your local library. Amazon has begun to profit from all of these products, extending its business from consumer retail into government procurement, according to a new report released today.

As detailed by Stacy Mitchell and Olivia LaVecchia of the nonprofit Institute for Local Self-Reliance (ILSR), Amazon won a nationwide contract last year to supply up to $5.5 billion in commercial items for states, cities, and school districts through its Amazon Business platform. Already over 1,500 jurisdictions have adopted the contract, despite the fact that it doesn’t guarantee fixed-rate prices or volume discounts, as is typical with government purchasing agreements. This means cities and states could end up overpaying for basic supplies, with Amazon profiting on the back end.

Local and regional office suppliers (an under-the-radar industry that pioneered many customer conveniences, such as next-day delivery, more commonly associated with Amazon) can still sell to municipal governments under the deal—but only if they join Amazon’s platform, and pay the 15 percent share of revenue that Amazon takes for access. This underscores Amazon’s real goal—to levy a tax on all economic activity, as market analyst Ben Thompson put it last year. Businesses large and small are induced into joining the Amazon marketplace when there’s no other way to reach customers. Whoever makes the sale, Amazon takes a cut.

With annual spending of close to $2 trillion, state and local government procurement is a logical next market for Amazon. Says Mitchell, one of the report’s co-authors, “[Amazon CEO] Jeff Bezos’ vision comes out of Wall Street: How can I make a bit of money on everything?”

The contract is part of a broader strategy by Amazon to grab a chunk of public spending. The company hired Anne Rung, once the Chief Acquisitions Officer for the White House, to head up its government division. An “Amazon amendment” in last year’s defense authorization bill would allow defense procurement officials to use the platform for off-the-shelf commercial items. Amazon’s rivals have warned that the Defense Department is poised to award the company a $10 billion cloud computing contract.

A contract tailor-made for Amazon

In January 2017, Amazon secured the five-year contract, which carries the potential for six more years of renewals, through U.S. Communities, which facilitates joint purchasing agreements for its 55,000 members, in exchange for a small piece of the revenue. Through this setup, government agencies of any size pool their purchasing power and get better terms on long-term contracts.

Or, at least that’s the theory. But it only works if there’s a competitive bidding process to extract the most favorable deal. In this case, the request for proposal (or RFP) for the contract was so specialized that only one company appeared able to meet it. “We thought, ‘This is absolutely spec’d to Amazon,’” said Gordon Thrall of Guernsey, an office supplier that was part of the coalition that won the previous U.S. Communities contract in 2010.

U.S. Communities solicited bidders who could run online marketplaces offering 10 different product categories, something only Amazon was able to meet. The RFP attracted only five eligible bids, three from companies that only sell specific items like musical instruments or commercial printing services. A normal RFP attracting so few responsive bids would often get redone; but Amazon won the contract.

Who needs price controls? Trust the free hand of the Amazon marketplace

One-stop shopping for every item a local public agency might need is certainly attractive. But governments gave up plenty to Amazon in the exchange. At the heart of these deals is usually a fixed price guarantee, which allows for consistent budgeting. “It’s the bedrock of public procurement,” says Mitchell. “Typically a city would say, here are the 1,000 items we buy the most of, you have to guarantee the price. The risk is on you if the price goes up.” Suppliers accept that risk in return for a long-term, high-volume contract.

This contract gave no pricing instructions at all; no guaranteed fixed rates, no volume discounts. Instead, U.S. Communities asserted that, because Amazon Business is a “marketplace” with numerous sellers, competition would ensure the lowest price. Purchasers can freeze the price on any item they order for seven days. But otherwise, as U.S. Communities wrote in a response to the report’s authors, “Pricing on Amazon Business is dynamic through their competitive marketplace.”

An Amazon spokesperson tells In These Times that the contract provides “features and benefits that help simplify the procurement process and increase efficiency for buyers.” The company also noted that public agencies will be able to “ensure competitiveness and best-value pricing … we have seen great progress to date.”

According to the report, however, U.S. Communities didn’t appear to test whether prices were actually lower on Amazon with anything more rigorous than a spot-check. In webinars to public agencies, Amazon and U.S. Communities have stressed the upside of this arrangement. But prices also can increase, and often do; After all, that’s what inflation is.

The report compared 57 goods purchased by a California school district over two weeks in January to prices on Amazon. The school district paid $1,205 with free next-day delivery; Amazon would have charged at least 10 percent more—12 percent with comparable shipping speeds. A separate study from the Naval Postgraduate School of items purchased by the Air Force found that the current e-commerce platform created by the General Services Administration beat Amazon on price for “most items.”

This makes sense, because sellers on the platform have to pay that 15 percent fee to Amazon. It’s impossible for them to do that and also offer the lowest price, especially on a public agency contract, where discounts are usually guaranteed and profit margins are very slim.

Though we think of Amazon as the unparalleled leader in speedy delivery, this contract also offers worse service. Independent office suppliers have provided free next-day shipping for decades, and that was guaranteed in the previous U.S. Communities contract. Amazon offers no guarantee on shipping, and only provides two-day shipping if cities sign up for Amazon Business Prime for $499 a year.

Finally, Amazon altered the contract’s terms and conditions, including giving itself the ability to intervene in and redact public records requests to ensure that information sought by the public about the contract never gets disclosed. The RFP’s original terms stressed that all communications related to the contract “shall be open to the inspection of any citizen, or any interested person, firm or corporation.”

In other words, Amazon landed a contract where they will offer worse service at a higher price than independent supply stores. “Amazon waltzed into this sector and secured a contract not by out-competing, but by using its power and pull,” Mitchell says.

The cities that resist

Pushing into state and local procurement expands the number of transactions upon which Amazon can levy a tax. But some cities have other ideas. Though cities already use Amazon for various off-contract purchases, some to disturbing extremes (Denver’s public schools spent $1.6 million on odds and ends in 2016), Phoenix only spent $700 on the platform in 2016. The City Council instead created a Local Small Business Enterprise Program in 2012 to prioritize its purchasing. Spending with small business jumped from $50,000 to $2.3 million in two years. And those dollars circulated within the local economy, rather than Amazon’s corporate treasury. A spokesperson for the city financing department told In These Times that Phoenix hasn’t signed onto the Amazon contract because of concerns about its small business program.

Mitchell believes that, with local businesses already being so dramatically undercut by Amazon, cities should resist handing them public purchasing as well. “Not only is Amazon setting up a contract to take advantage of public dollars, but they’re inserting themselves as a gatekeeper between local government and local businesses,” she says. “This is a way for local officials to talk about the dangers of monopoly.”