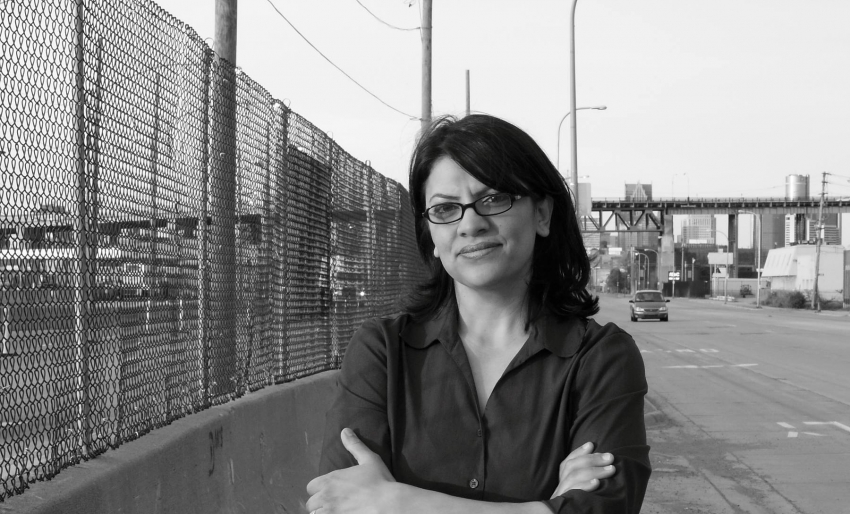 The newly elected Democratic nominee for Congress talks about how she plans to help working-class Detroit and why she supports a one-state solution for Israel-Palestine.

I’m a young mom that believes I can’t stay outside the ring anymore. I’m not going to sell out. I’m confident about changing the whole approach to public service.

Tlaib’s victory has been showered with mainstream press around the fact that she’s the daughter of Palestinian immigrants and would become the first Muslim woman elected to Congress. (Tlaib is running unopposed, and will most likely win in November.)

To progressive Detroiters though, her religion isn’t the reason for celebration. Rather, it’s her reputation for having an unwavering commitment to justice for the poor, the disenfranchised and the marginalized of her district, which now encompasses parts of Detroit as well as its working-class white, African-American, and Arab-American suburbs.

The former state representative—and open democratic socialist—is also known for her grassroots organizing and campaigns against corporate power and polluters in her home community of Southwest Detroit. Tlaib recently spoke with In These Times over the phone and discussed her plans to bring the voice of her constituents to Washington, what democratic socialism means to her and her views on Israel-Palestine.

This interview has been lightly edited for clarity and length.

How do you intend to help the residents of your district once in Congress?

The 13th Congressional district—I believe we are the most uniquely challenged.

Shame on Gov. Rick Snyder. Shame on Democrats who keep voting for tax breaks for Ilitch, [the Ilitch family, owners of Little Caesar’s pizza and the Little Caesar’s arena] and [Quicken Loans owner Dan] Gilbert. These people are fueling the biggest problems we have. The 13th doesn’t have fair access. There’s no jobs because you’re not putting money into the community.

I grew up in Southwest Detroit, surrounded by inhumane conditions caused by polluters. I thought that smell was normal. Corporate greed can hurt. I’ll take that lens to Congress, and I will not waver.

I’m giving a voice and an opinion based on my residents who feel like they’re not being heard.

They [elected officials] haven’t been listening. I hope people can see I’m sincere. This isn’t political strategy. I want to change people’s lives for the better, and change the climate in Washington.

I’m going to create neighborhood service centers. There are resources now that people don’t know about. We’ll run them like a nonprofit. This isn’t a district office for meetings. All the issues of the community, it doesn’t matter how diverse. My team will be ready and trained to help them.

Elevating the voices of residents has to include grassroots advocacy on the ground. Combined with my experience as an attorney, we’ll be able to change people’s lives for the better.

I’m a young mom that believes I can’t stay outside the ring anymore. I’m not going to sell out. I’m confident about changing the whole approach to public service.

What I can tell you is that we need to go beyond trying to get something done through city council. I’m not sitting back because this is local. I want you to know that as a member of Congress, with [community groups] that have seen more and more divestment than even 30 years ago, I know I’ll be able to raise the voices louder to use the power to convene and the power of the letterhead.

If I’m going to help fund different issues around education, I can get people across the aisle to understand how irresponsible it is to divert public dollars into for-profit private development.

You are a member of the Democratic Socialists of America and were endorsed by Detroit DSA. Can you explain what democratic socialism means to you?

It means a strong partner. When I talk about equitable, just fairness, I lean on a whole group of people who understand just how much the structures in place are set up against the people, people of color, and the working class. It helps me have an organization and people to lean on. It’s important to have that kind of partnership.

Do you see your victory as well as that of Alexandria Ocasio-Cortez in New York and other open democratic socialists as part of a larger movement toward the left in the Democratic Party?

Absolutely. People who talk about universal health care, accessibility, that’s what is moving people towards us. When we stop trying to label it, more people will come.

Southwest Detroit is militarized because of ICE. It’s not keeping our families safe—it’s making families live in fear. It’s an international border neighborhood. [ICE has] shifted toward targeting Americans and our neighbors, folks trying to do the right thing. It’s made immigration a militarized operation. I want it abolished.

You have a strong anti-war stance in your platform. How do issues of war and militarism fit into your agenda?

I don’t support military operations. If you go to the Department of Defense website, every day, Monday through Friday, there is an area called “contracts.” Go there. You want to pay for college? Medicare for All? Pay to take care of Americans dying from famine to basic human rights abuses? Look at those contracts. I’m floored at how much money [they’re spending].

Do you want to divert the DOD budget into social services?

Yes. We can build safer and more vibrant communities. I am tired of the earmarks for corporations. They aren’t going to Americans. They’re going to private companies. Not only have we made prisons into private corporations, wars are a for-profit industry.

The [DoD is] a cesspool for corporations to make money.

On the issue of Israel-Palestine, some writers have criticized you for accepting donations from J Street. Why did you take money from the group, and which of their stances do you agree and not agree with?

Once of the things [J Street liked] was my personal story I shared with them. I knew we weren’t going to agree on a number of stances. They didn’t ask me to waver once.

Americans should not be aiding any country that doesn’t support human rights. I’ve been very clear. I will not support racist countries that pick and choose who gets access to justice. My grandmother shouldn’t be denied access or considered less human because she is Palestinian.

I grew up in Detroit, where every corner is a reminder of the civil rights movement.

Seeing the unequal treatment in Israel, in the different colored license plates for Palestinians; and even in the ocean. When I was 19 and with my family and some of them had head scarves on, we all jumped in the water and the Israelis jumped out as if my cousins were diseased. That reminded me what I learned about the African-American struggle. That’s the lens I bring to Congress.

My social justice and passion for human rights was birthed in Palestine. My grandfather was shot 11 times—and he survived.

Those are the personal experiences I bring forward.

Palestinians are attacking me now, but I am not going to dehumanize Israelis. I won’t do that. Just like people do not accept Trump, I hope they don’t reflect that on me.

Many [Israelis] are marching, saying no to Netanyahu’s apartheid policies. There’s a movement in Israel I support that wants an Israel that embraces Palestinians.

For me to see the beauty of marching together again… I come from a place of love and the possibility of that.

I think we should integrate the schools, because those walls, the separation, the segregation, us versus them, isn’t going to get us there.

I do not support aid to a Netanyahu Israel and I’m pro-humanity. I think that’s why J street [supported me].

Where do you stand on Palestinian right of return—support or oppose?

Very supportive. I see what happened to African Americans in our country. I support right of return absolutely. I have family that left [Palestine] in 1967. They left, took their keys with them. They thought they could come back, and they’ve never been back. My uncle would tear up because he couldn’t believe he couldn’t go back. He had to raise his kids in Jordan.

You don’t have equal access. Separate but equal does not work.

Where do you stand on BDS—support or oppose?

I‘m an ACLU card member. I stand by the rights of people who support BDS. Allow the students to be a part of the movement. I am so proud of the Center for Constitutional Rights in support of student movements for BDS. If you don’t support freedom of speech, you’re in the wrong country.

What about a two-state solution vs. one-state?

One state. It has to be one state. Separate but equal does not work. I’m only 42 years old but my teachers were of that generation that marched with Martin Luther King. This whole idea of a two-state solution, it doesn’t work. Even though we continue the struggle in the United States, we have a better chance to integrate. My grandfather said, ‘I don’t understand, we were doing so good. My neighborhood, Arab-Jew. We picked olives together. Why now do they want to be over me?’ ‘You did nothing wrong,’ I told him.

I feel the same way. Equality isn’t based on faith.

The United States is a safe haven for anyone who needs to be protected. I can see Israel moving in that direction. The only way to feel safe is when you look across the table and say they deserve to feel safe in their own country.