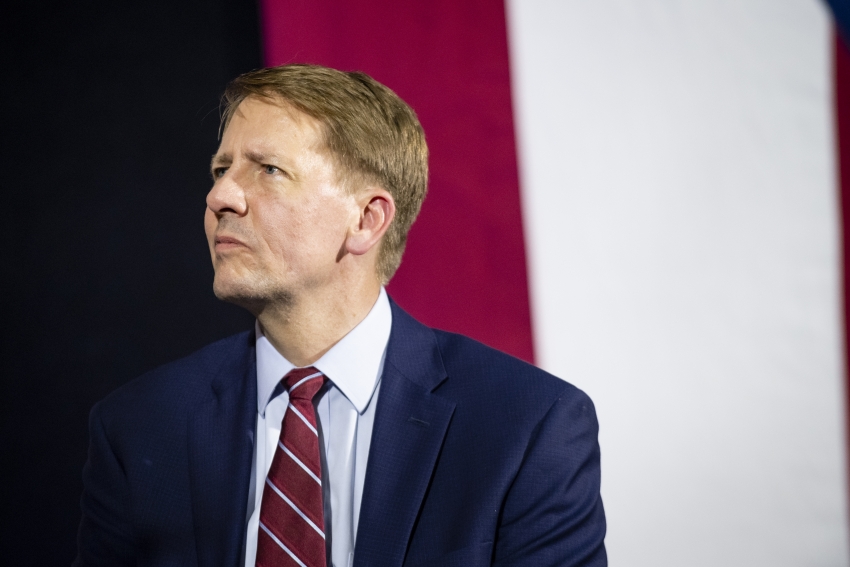 The 2018 Ohio governor's race is a repeat of the 2010 attorney general race. (Angelo Merendino/Getty Images)

The facts are clear: When nobody would call out banks for their malfeasance, one public official stood up for the rule of law.

In 2010, two candidates battled one another in a low-profile race in Ohio. Republican Mike DeWine, who was ousted from the U.S. Senate in 2006 by Sherrod Brown, thought he could return the favor to state attorney general Richard Cordray.

This year DeWine and Cordray are facing each other again, in the race for governor of Ohio. But the circumstances of that 2010 contest reveal how much it matters who represents the public at critical moments, even in down-ballot seats.

Weeks before the 2010 election, the nation’s leading banks were forced to come clean. They had mass-produced millions of pieces of false evidence in foreclosure cases, kicking people out of their homes by relying on dodgy documents. Americans were introduced to the term “robo-signing”—referring to individuals who signed thousands of affidavits attesting to the truthfulness of bank claims about foreclosures, without knowing anything about the underlying cases. One of these robo-signers was Jeffrey Stephan, an employee for GMAC Mortgage, initially the financing arm of General Motors which went on to become the nation’s fifth-largest mortgage servicing company.

Stephan admitted in multiple depositions to signing 10,000 foreclosure affidavits a month, without verifying the amounts due, the chains of ownership, or anything else about the loans. Once a judge in Maine sanctioned GMAC for Stephan’s practices and vacated a GMAC foreclosure judgment that September, the company suspended all its foreclosure cases in state courts.

In Ohio, Cordray saw the Stephan documents as instances of mass perjury, orchestrated by a major mortgage company to swindle millions of people out of their homes. Behind the robo-signed affidavits were a mess of false documents and foreclosure processes that threw into question the true owner of millions of properties. Demanding accountability around these cases could help to unfurl all of the mortgage industry’s crimes.

Cordray filed a lawsuit in Ohio against GMAC and Stephan, citing the use of false documents “to increase… profits at the expense of Ohio consumers and Ohio’s system of justice.” The suit treated every false affidavit as a separate violation, subject to a fine of $25,000, plus additional restitution for wrongly foreclosed homeowners. Given the number of foreclosures filed in Ohio at the time, and the fact that robo-signing was a standard practice, the fines for the entire industry would total up to $11 billion in Ohio alone.

“We’re at the beginning of this, not the middle or end,” Cordray said on October 6, 2010, when he filed the lawsuit. “It is now becoming clear that fraud, deception, and an utter disregard for accuracy are in part to blame for our national foreclosure disaster.” When challenged on whether the borrowers hadn’t paid their mortgages, Cordray pushed back. “If we would file a case with an affidavit we know to be false, that is seen as a very serious matter by the court. I don’t see why this should be taken any more lightly.”

At the time, Cordray was the only state attorney general to have actually sued a bank over foreclosure fraud. But he had a problem: his re-election. Facing a tough political landscape for Democrats, one which recent research shows was exacerbated by mass foreclosures that significantly decreased voter turnout, Cordray lost by 48,686 votes out of more than 3.8 million cast.

Ohio v. GMAC passed into the hands of DeWine, and it never even got to trial. The case was set to turn on the question of whether mortgage servicers, which collect mortgage payments on behalf of loan owners, were subject to Ohio’s consumer protection laws. But two days before a scheduled hearing, on February 6, 2012, DeWine notified the court that he had accepted a federal/state settlement on robo-signing and other issues with five mortgage companies, including GMAC. That national settlement included dismissing the claims in the GMAC case.

Private homeowners took over the case from DeWine, and it dragged on for years until the Ohio Supreme Court finally dismissed it in 2016. The dismissal did not rest upon whether GMAC filed false evidence in state courts, but whether the private homeowners were part of GMAC’s 2012 bankruptcy proceedings and subsequently had standing to sue.

In 2013, Cordray became head of the Consumer Financial Protection Bureau, while DeWine served two terms as state attorney general. Their current race for Ohio governor has been largely focused on the opioid crisis and pre-existing health conditions, not foreclosure fraud. But I can’t help but think that the experience of Ohio v. GMAC speaks volumes.

There’s no guarantee that things would have turned out differently if Cordray had narrowly won his attorney general race, instead of narrowly losing. Democrats and Republicans, many of whom initially talked tough about foreclosure fraud, together accepted the weak national settlement and relinquished the prospect of real accountability. I even criticized Cordray’s CFPB for inadequate punishment against mortgage servicers, and while the agency eventually rectified the situation, it came far too late.

But there’s no question that DeWine didn’t put up any kind of fight in the GMAC case. He quietly went along with the settlement and folded his fraud allegation in with it. Ohio v. GMAC was Cordray’s brainchild; it’s not implausible that he might have held out to achieve justice for fraud upon state courts, or continued to investigate the corrupt practices of other servicers, making a weak settlement politically impossible.

The facts are clear: When nobody would call out banks for their malfeasance, one public official stood up for the rule of law. But we never got to see his follow-through, and his replacement settled for a wrist-slap on the banks that infuriated the public and taught them the system is rigged. This unheralded Ohio attorney general’s race eight years ago played a role, in my view, in the rise of Trump-style right-wing populism, as a snake-oil antidote to an era of no accountability.

So many out-of-the-spotlight races on Tuesday could have a similar impact. District attorney races could shape the future of criminal justice; school board seats will determine the survival of public education; ballot measures in Idaho, Nebraska, and Utah would expand Medicaid in those states, directly saving thousands of lives. Congressional and gubernatorial races are important, but the decisions buried deepest on the ballot are often the ones with the most direct bearing on people’s lives. And you never know when something like the foreclosure crisis will thrust unknown public officials into the foreground.

Meanwhile, the lingering consequences of the demise of Ohio v. GMAC can be seen by how perpetrators of foreclosure fraud keep popping up in positions of power. Steven Mnuchin, the Treasury Secretary, chaired serial forecloser OneWest Bank; top bank regulator Joseph Otting was its CEO.

Kevin Stitt, the former CEO of Gateway Mortgage, is in a dogfight in his race for governor of Oklahoma, despite being a Republican in a red state. Gateway Mortgage’s shady foreclosure practices were common for the industry. In fact, in 2010 the website 4closurefraud identified a prominent robo-signer penning documents on behalf of Gateway.