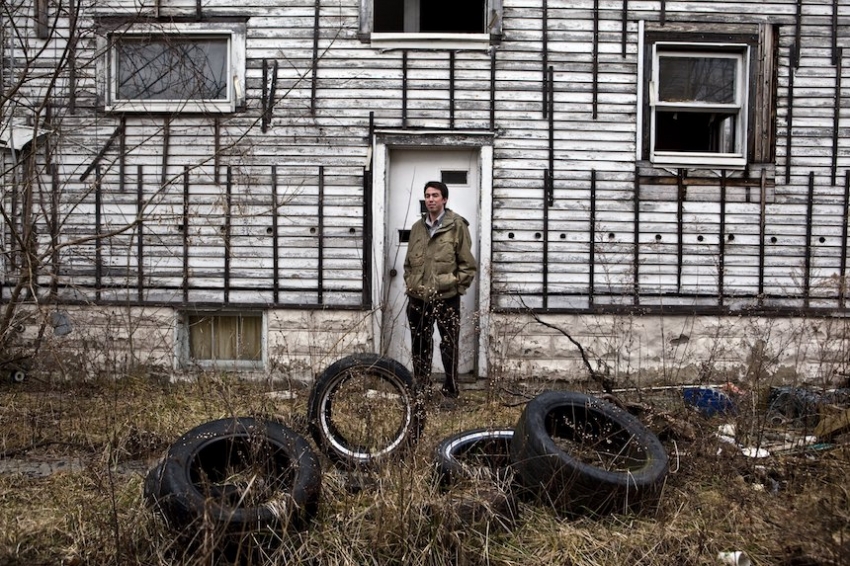 High crime and urban blight mar what was once one of the busiest steel mill towns along the famous American Rust Belt. (Benjamin Lowy/Getty Images)

Could Regional Reparations Help the Democrats Retake the Rust Belt?

States such as Ohio and Michigan have been hit with blight and economic downturn. Offering reparations to those hardest hit could be the key to winning in 2020.

As economic growth nationally soared to unparalleled heights amidst the turbo-charged global boom of the 1990s, whole regions were left in the dust.

Among the challenges facing Democrats in the 2020 presidential election, perhaps none is more daunting than how to simultaneously mobilize their base of urban, African-American voters and appeal to wayward, white working-class voters who defected to Trump in 2016. As counter-intuitive as it may sound, however, reparations—a measure increasingly popular in addressing the first constituency—may also unlock the door to the second.

Conventional wisdom has it that proposals for racial reparations—i.e., some form of direct aid to the victims of a legacy of slavery followed by Jim Crow discrimination—will only add to the party’s electoral dilemma. It further feeds a narrative that one cannot address the wishes of white and black workers at the same time. Long smoldering in political limbo before it was revived in a 2014 essay by Ta-Nehisi Coates, reparations continues to draw traction from several candidates on the progressive wing of the party. Julian Castro, Kamala Harris, and Elizabeth Warren all expressed early support for the basic concept, even if they left the details to later elaboration. Such arguments, left to themselves, will likely only fuel the revolt of those whom one former Ohio Republican Party leader delicately called the “white working-class traditional Democratic voter.” To get white residents of rust belt communities on board with racial justice, one bold response would be for Democrats to acknowledge that their own neoliberal policies have been harmful to these communities. The most dramatic way to do so would be for Democrats to borrow the concept of reparations, pledging at once to address racial discrimination and to reinvest in these areas to help all residents struggling from the economic collapse of the region.

The hemorrhaging of white voters started in the 1960s as both a racial and economic response to the new social movements and targeted welfare spending for the poor and minorities. By the 1970s, as stagflation (or slow growth accompanied by rising prices) was exacerbated by the 1973 oil shock and accompanying recession, the great middle-class escalator to which the Democratic Party had long staked itself noticeably stalled. In the circumstances, the higher taxes generated both by the Vietnam War and Great Society further inflamed white reactionary voting trends. White blue-collar defections from an affirmative-action-identified party continued into the mid-1970s, when then-Sen. Joe Biden fended off talk of reparations. “I don’t feel responsible for the sins of my father and grandfather,” he explained, “and I’ll be damned if I feel responsible to pay for what happened 300 years ago.”

In 2016 Trump effectively added immigration and trade issues to the perceived race-based threats affecting working-class communities. Between his “Build the Wall!” and “I’m fighting China to get you better jobs” rhetoric, the president has constructed a powerful if dangerous magnet to take advantage of Middle American economic resentments. In May, the New York Times quoted a Youngstown aluminum plant foreman, “People pouring over the border is unacceptable. We’re funding everybody on the planet. I’m tired of it.”

It is easy to fend off such complaints as mere racist scapegoating. Rather than dismiss white workers’ claims as irredeemably hostile, however, Democratic strategists would do better to recognize in such expressed resentment an unrequited plea from declining population centers for national attention. Make no mistake about it. The United States has its devastated areas, and they include many former Democratic Party strongholds. For example, the Youngstown, Ohio, area has suffered a virtual free fall of population since the 1970s, and according to the Brookings Institution is today among the cities with the highest percentage of citizens living in concentrated poverty. And of course it is not alone: Detroit, effectively ground zero of deindustrialization, went from 1.8 million people in 1950 to 700,000 by 2010, before filing for bankruptcy in 2013. Meanwhile, Cleveland, where the GOP convention nominated candidate Trump in 2016, competed with Detroit for designation as the biggest cities with the highest poverty rates. The decline of white working-class support for the Democrats in Ohio and Michigan is credited with helping to turn the states red in 2016.

How to respond? Democrats might begin by accepting some responsibility for the regional economic debacle. As economic growth nationally soared to unparalleled heights amidst the turbo-charged global boom of the 1990s, whole regions were left in the dust. No, it was not undocumented immigrants (or other minorities or even steelworkers in China) who set “Rust Belt” communities on a downward course, but it was Democratic as well as Republican lawmakers who presided over the debacle and did precious little about it. Globalization and free trade, generally championed through both the Clinton and Obama administrations (not to mention their GOP counterparts), let wages slip, unions collapse and industrial planning go by the boards.

Beyond generally progressive economic programs like Medicare for All and the Green New Deal, Democrats need a message for the communities that since the 1970s have taken such a vicious hit in population, jobs and morale. Moreover, on purely pragmatic grounds, so long as we have a political system based on geographical districts for the House of Representatives, geographic (i.e. state) parity in the U.S. Senate and Electoral College supremacy at the end of the presidential ballot, progressives will need to treat places (as well as the social groups in them) as sovereigns deserving protection.

As an extended region, the Rust Belt deserves a form of regional reparations. Depending on the level of victimization—to be defined by a measure of job and population loss, poverty rates and environmental degradation—these communities stretching from West Virginia and Pennsylvania in the East to Ohio, Michigan, Indiana, Illinois and parts of Iowa in the Midwest and again extending to old textile and furniture-manufacturing centers like northern Georgia and western North Carolina deserve their own form of affirmative action. A 2017 study by Michael Lind and Joel Kotkin, “The New American Heartland: Renewing the Middle Class by Revitalizing Middle America,” though designed for other purposes, offers some potential policy cues. They point particularly to a need for federal R&D dollars in science and technology and direct aid for infrastructure (especially via revitalized seaports and inland waterways) as well as indirect aid via the tax code for state and local public-private partnerships. The small city of Columbus, Ind., with its attention to an integrity of design in both schools and private businesses, a welcoming atmosphere for its foreign-born residents and training for skilled workers, serves as a model that could be expanded upon for targeted mixed-use development.

Of course we must not set the needs of de-industrialization victims against those suffering from racial oppression. And, given Youngstown’s 43%, Cleveland’s 50%, not to mention Detroit’s 79% central city black population, we are usually talking about overlapping demographic groupings.

The question really is whether the Democrats are prepared to take a determined and convincing step in both directions at once. To be sure there will be no cure overnight, but it is not too late to call out and then address America’s crisis of internal underdevelopment. A big-tent party will not likely eliminate tension, let alone banish white racism, within its disaffected flock. Only by calling itself to account, however, can it also expect its partisans to rise to the occasion. If the Democratic Party, responding to genuine social pain and need, brought a white working class immiserated by deindustrialization and the black victims of structural racism into real dialogue, might we again see an electoral realignment worthy of the term?