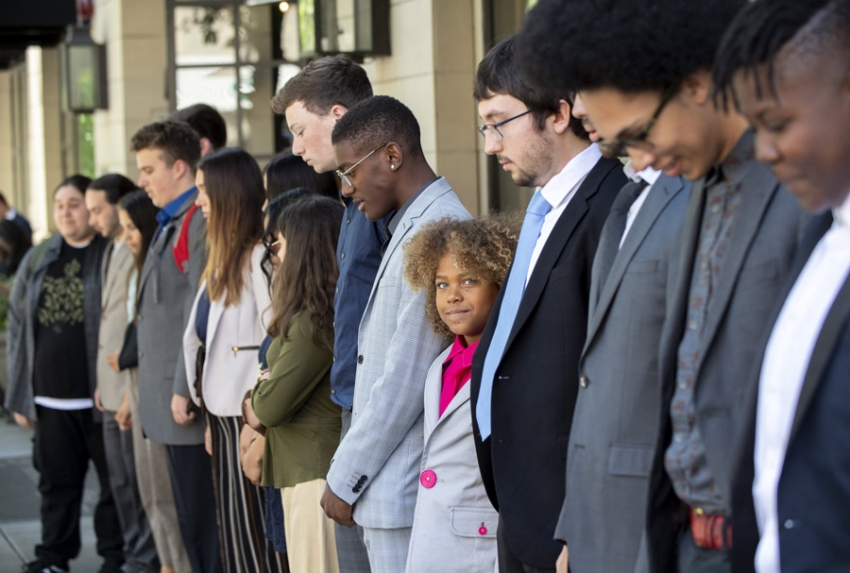 Youth plaintiffs suing the government over climate change line up (with 11-year-old Levi Draheim looking at the camera) before walking to the federal courthouse in Portland on June 4. (Robin Loznak)

Life, Liberty and a Stable Climate: These Kids Are Arguing for a New Constitutional Right

After a June hearing, the youth suing the government await news on whether their case will proceed to trial.

PORTLAND, ORE.—Judge Andrew Hurwitz arched an eyebrow. “You’re asking us to do a lot of new stuff, aren’t you?” He was grilling Julia Olson, executive director of Our Children’s Trust, who was arguing before a panel of three judges on the Ninth Circuit Court of Appeals to allow a groundbreaking climate justice lawsuit, Juliana v. U.S., to proceed to trial in federal court.

Filed in 2015, Juliana includes 21 plaintiffs, then aged 8 to 19, asking the judiciary to order the federal government “to swiftly phase-down CO2 emissions … [and] develop a national plan to restore Earth’s energy balance” because their lives are in danger from government-caused climate change. To make the case, the plaintiffs, more than a dozen of whom packed the benches behind Olson, need to prove the government is violating their constitutional rights by facilitating climate change.

The question of government culpability is central to the Juliana lawsuit. The government can’t be held liable for inaction to a danger—but it can be held responsible for creating that danger. The lawsuit hopes to prove youth are being discriminated against in favor of the present generations of adults who will experience few of the consequences of catastrophic climate change.

While the right to a “stable climate system” is not enumerated in the Constitution, the Ninth Amendment states that other rights exist even if not listed. Olson argues a stable climate system is one such right, and it is essential to the Fifth Amendment right of not being “deprived of life, liberty, or property, without due process of law.”

Jeffrey Clark, assistant attorney general of the Environment and Natural Resources Division, argued to the judges June 4 that the lawsuit is “a dagger at the separation of powers.” He claimed that, if elected officials fail to stop an imminent threat to life, the solution is “the political remedy of removing them from office”—not having the courts to step in.

Hurwitz’s gravelly voice interjected, cutting through the thicket of legalese. The government position, he summarized, is if the plaintiffs faced immediate harm and the legislative and executive branches did nothing, “The plaintiffs would have no option but to die.” He added, “That may well be constitutionally correct.”

But the judges did express skepticism of the government’s case. Judge Josephine Staton asked Clark why the right to a life-sustaining climate wouldn’t “fit comfortably within the nature of other unenumerated rights—such as the right to an abortion, the right to bodily integrity, the right to marriage—that the court has found exists in the ‘life, liberty and property’ rights of the constitution.”

Clark answered with the same arguments made by the Obama administration, which also sought to quash Juliana: The youth have no standing to sue, their grievances are not redressable and the problem is outside the powers of the judicial branch.

“The Trump administration appears even more determined to quash the lawsuit than its predecessor—which is not surprising given its hostility to climate policy. This animosity is shared by Clark, who, in a 2010 panel discussion, called the EPA’s greenhouse gas regulation “reminiscent of kind of a Leninistic program from the 1920s to seize control of the commanding heights of the economy.”

The ruling may take months, but the plaintiffs and their legal team were in a celebratory mood, pouring out of the federal courthouse to a sunny day, TV news cameras and cheers from supporters. Led by the Unpresidented Brass Band, they paraded through the streets to a plaza in downtown Portland.

A grandmother and granddaughter team from climate-justice group 350.org performed a skit outside, reading scientific warnings about climate change going back to 1961 followed by puppets of presidents, from John F. Kennedy to Donald Trump, describing the policies they enacted to burn more oil, coal and natural gas. The granddaughter would ask, “Did the government know?” and the audience of hundreds would yell, “The government knew!”

Politically, the focus on children has helped to change the face of the climate-justice movement from older and white to youth-led and diverse.

Speaking at the rally, plaintiff Vic Barrett, 20, said, “We spent another day in court facing our government, the apparent strongest government in the world, showing fear of young people and showing fear of facts.”

The youngest plaintiff, 11-year-old Levi Draheim, also spoke. “It’s been four years since I got involved with this case. That’s literally one-third of my life that I have dedicated to this lawsuit.” Rising sea levels are threatening to submerge the barrier island he lives on off the Atlantic coast of Florida, a place where, he says, “I can watch dolphins, turtles and manatees, and I can go barefoot all year round.”

As the rally dispersed, a marimba band struck up. Olson and a handful of plaintiffs started dancing. When asked if they were looking for the government to do something new, Olson said, “We’re asking them to apply bedrock constitutional law to new factual circumstances.” Excusing herself, she continued dancing.