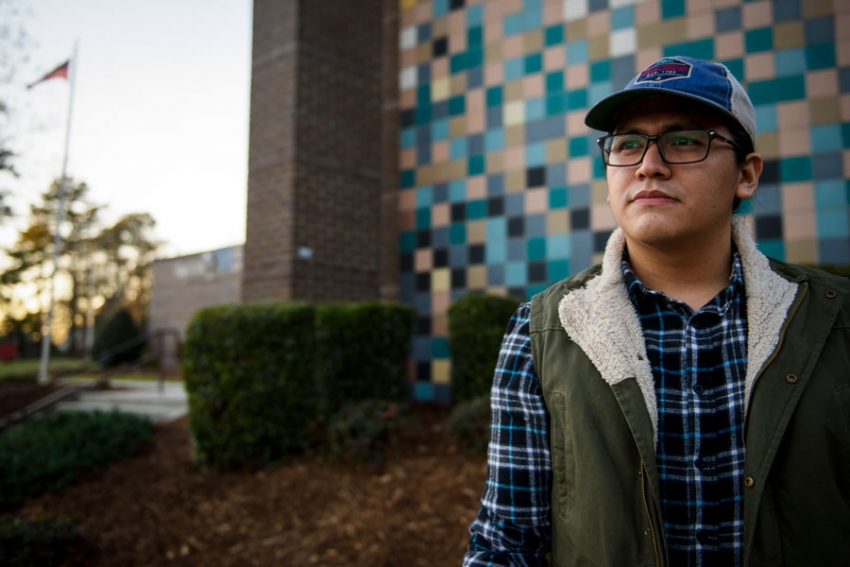 Manuel Mejia Diaz, of Democracy NC, looks on from North Carolina’s early-voting site at Fayetteville’s Smith Recreational Center—which will continue serving voters because of his and others’ grassroots efforts. (Photo by Melissa Gerrits)

A Win Against Voter Suppression in the South

While Republicans have purged voter rolls and suppressed Black turnout in the South, voting rights organizers just showed how to win.

For students and residents alike, having an early voting site nearby can mean the difference between voting and sitting out.

RALEIGH, N.C.—“Being an old Baptist preacher, you know how we are,” Floyd Johnson drawls with apologetic humor to the North Carolina State Board of Elections (BOE) in late December 2019, at the end of its final meeting of the year. Johnson, who chairs the Cumberland County BOE, traveled to the capital with a simple request: include Smith Recreation Center in Fayetteville, steps from the historically Black Fayetteville State University (FSU), as an early voting site for the 2020 primary.

Smith Rec not only serves FSU but sits in “one of the heaviest poverty-struck areas of Cumberland County … centered in the heart of the Afro-American community,” Johnson says. Indeed, the site serves a predominantly Black, working-class neighborhood, where the median annual income is below the poverty level for a family of four. For students and residents alike, having an early voting site nearby can mean the difference between voting and sitting out.

Of the county BOE’s five members, the two Republicans opposed the idea, requiring state BOE approval to move forward. Linda Devore, one of the Republican members, cited low voter turnout (disputed by advocates) among her reasons to oppose the inclusion of Smith Rec, but the state BOE sided with Johnson and the 500 signatures he delivered from Fayetteville residents and students. In February, they will be able to vote, early, where they live, work and study.

“This is a victory for the community around Smith Rec,” says Manuel Mejia Diaz, 25, who lives nearby. Mejia Diaz is the southeastern regional managing organizer for Democracy NC, an advocacy organization. When Common Cause NC, another advocacy group, began the petition effort, Mejia Diaz joined in.

Without early voting, “people would have to wait for the bus, they would have to go all the way to downtown, wait, and maybe a problem would arise and they’d have to handle that, then they have to wait for another bus, come back,” Mejia Diaz says, running out of breath. “It creates a lot of hassle” for working people.

Voter suppression continues to be a problem across the South. In December 2019, Republican lawmakers in Georgia purged more than 300,000 voters from its rolls, many of them low-income and people of color.

After North Carolina expanded early voting in the early 2000s, the Washington Post reported Black voter participation “skyrocketed from 41.9% in 2000 to 68.5% in 2012.” In 2008, the Charlotte Observer reported Black voters accounted for “36% of those casting ballots on the first day of early voting,” despite making up 22% of registered voters.

In 2013, after the U.S. Supreme Court overturned key provisions of the Voting Rights Act of 1965, Republican lawmakers overhauled North Carolina’s election procedures, repressing Black voter turnout. In the name of fighting voter fraud (which reportedly amounts to less than a rounding error), the state adopted strict voter ID requirements and curtailed early voting, among other measures—all of which a federal judge struck down in 2014, saying it targeted “African Americans with almost surgical precision.” Subsequently, the state passed another voter ID law, which a different federal judge struck down on Dec. 31, 2019, citing the state’s “sordid history of racial discrimination and voter suppression.”

The Smith Rec voting site had survived the 2013 cuts and was open for early voting in 2014 and 2016, but the county BOE opted not to open it for the 2018 midterms and its fate remained uncertain ahead of 2020.

When Mejia Diaz learned in November 2019 that Smith Rec was again likely to be left out, he hit the pavement with FSU senior Kristian Carlyle, 21, a fellow with Common Cause NC. In a single week, organizers collected around 500 signatures and encouraged residents to voice their support at an upcoming county BOE meeting. Residents flooded the board’s offices in downtown Fayetteville. “The room was packed,” Mejia Diaz says.

Carlyle has fought for students’ voting rights since arriving at FSU. “It shouldn’t be difficult to exercise what is—what should be—a simple right,” she says.

For students at FSU, the stakes of voting in this election are high. HBCU students graduate with significantly more debt than their peers and have a harder time paying it off. In April 2019, presidential candidate Elizabeth Warren proposed investing $50 billion in HBCUs, and in November 2019, Bernie Sanders released a multi-billion dollar plan to make HBCUs tuition-free and erase loan debt.

“HBCUs got Obama elected,” Carlyle says. Their students, as well as the communities they serve, could very well shape the outcome of this election.

Casey Williams is a freelance writer based in Durham, NC. He covers issues from environmental justice to southern culture to labor and the Left in the South, and has published work in The New York Times, The Nation, HuffPost, and other local and national outlets.