At one of his last appearances, the singer looked back at an eight-decade career. 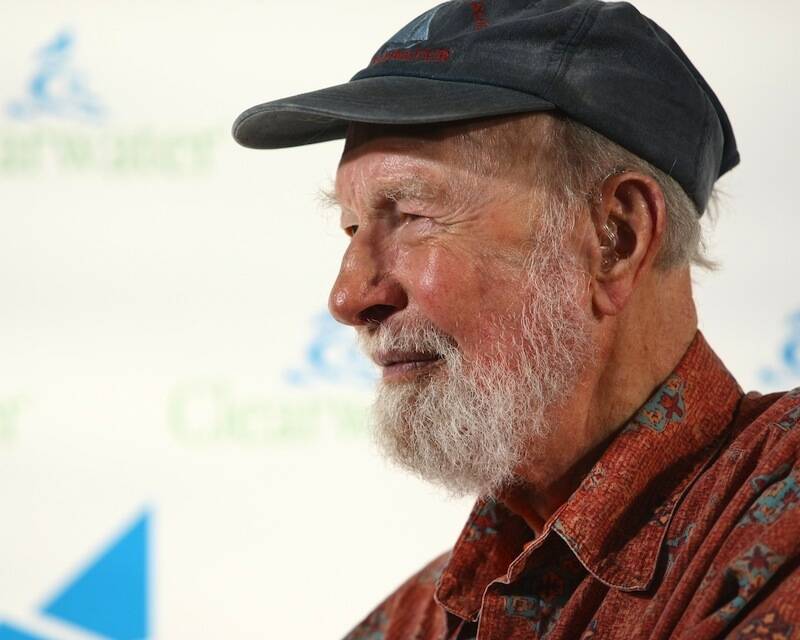 Pete Seeger at a benefit concert for his 90th birthday at Madison Square Garden on May 3, 2009. (Neilson Barnard/Getty Images)

I found myself cry­ing when I heard the news of Pete Seeger’s death today. When I was a child, my moth­er would wake me up in the morn­ing by singing ​“If I Had A Ham­mer,” the pro­gres­sive anthem that Seeger wrote for Peter, Paul and Mary. His music played a cen­tral role in teach­ing me the val­ues of sol­i­dar­i­ty and love, and con­tin­ues to do so.

For the first time in my life, I realized why millionaires [go out on] yachts. It's not how fast you go, it’s just the fact that you move it all. And if you use the wave that’s trying to force you back … you can use that great force against you, to move.

So when I learned last Sep­tem­ber that Seeger would be giv­ing what might be one of his last pub­lic per­for­mances, at Man­hat­tanville Col­lege in Pur­chase, New York, I decid­ed to make the jour­ney up.

After­ward, Seeger con­duct­ed a Q&A with the audi­ence. The singer didn’t always answer the ques­tions direct­ly, but he told a num­ber of sto­ries that gave new insight into his long career. Ear­ly in the night, he shared what he thought was the most impor­tant thing he’d done in his 94 years:

I think the most impor­tant sin­gle job I did in my life was show­ing oth­er musi­cians that you didn’t have to sing in a bar or a restau­rant and com­pete with the alco­hol for atten­tion. You could sing in schools. I first start­ed singing in sum­mer camps for chil­dren in a small school in New York City. My father’s younger sis­ter taught at the Daw­son School in New York City. …. I was try­ing to find a job as a news­pa­per­man, and fail­ing to get a job, and she said come sing some of your songs for my class, I can get five dol­lars for you. Five dol­lars! Most peo­ple had to work all day or all week to make five dol­lars, back in 1939. It seemed like steal­ing for me to go in and get paid five dol­lars just for hav­ing fun for an hour.

He also talked about a sur­pris­ing inspi­ra­tion of his — sailing:

I had a job on Cape Cod once. And at mid­night, a teenag­er took me out sail­ing. For the first time in my life, I real­ized why mil­lion­aires [go out on] yachts. It’s not how fast you go, it’s just the fact that you move it all. And if you use the wave that’s try­ing to force you back, sup­pos­ing wind is com­ing from the north … you can use that great force against you, to move. … Mar­tin Luther King did the same things. He got attacked, got thrown in jail, more pub­lic­i­ty, found more con­tri­bu­tions and more peo­ple lis­ten­ing to him.

I had a ques­tion for Seeger: Why don’t we hear as much polit­i­cal music, like his, as we used to? His answer was simple:

There is a lot of polit­i­cal stuff, it’s just not being financed. … The peo­ple with mon­ey don’t want to.

Lat­er, Seeger told the audi­ence how he wit­nessed Woody Guthrie come up with the idea for the famous pro-union song ​“Union Maid,” back in 1940:

We got to Okla­homa City…. I knew a man was try­ing to orga­nize oil work­ers to build a big der­rick to pump the oil out of it. And this was a small meet­ing, about 60 peo­ple. And there were women and chil­dren there; nobody had mon­ey for babysit­ters. So [some union busters] had come to see what this union busi­ness was all about, and the orga­niz­ers said, ​“Pete, see if you can get the crowd singing. There’s six men against the wall in the back, stand­ing up, and they haven’t tak­en their over­coats off. They might have clubs under their over­coats and they might be intend­ing to break up the meet­ing.” Well we got them all singing. And sure enough at the end of the meet­ing, the six of them came toward us and said, ​“This meet­ing was a lit­tle dif­fer­ent than we were told it was gonna be We were hold­ing base­ball bats under our over­coats. We were gonna break it up.”

Then the wife of the orga­niz­er said, ​“Pete, all these union songs are about men this and broth­er that. This union would have been bro­ken up if it hadn’t been for all the women here and the chil­dren here. Can’t you make up a song about the union women?” Next morn­ing in the union office, Woody was there with his gui­tar and he’d sing a verse, sit down, type it out. I can’t remem­ber but two of the vers­es, but he had a great chorus.“Oh you can’t scare me, I’m stick­ing to the union…”

It’s a good old tune, I don’t know where it came from and he had a great cho­rus there. And a year lat­er I was record­ing an album of union songs, with some oth­er peo­ple, and one of the songs didn’t turn out any good so they said, ​“Can you do anoth­er union song.” And I said, ​“What about this one? But I can only remem­ber two of the verses.” ….

And when we got to the West Coast … we sang it for the Labor Day parade. By gosh, it sped up, and we had to sing it over and over again. The whole parade was singing that song, at least the cho­rus of it.

He went on to say that the infor­ma­tion rev­o­lu­tion and women’s rights are tak­ing his­to­ry into unchart­ed territory:

Seeger also shared the sto­ry of wit­ness­ing the Peek­skill Riots of 1949, and what he did with two stones thrown at him there:

Paul Robe­son [was an] extra­or­di­nary, extra­or­di­nary man, not just a great ath­lete and a great singer, but a great intel­lec­tu­al. He knew six lan­guages, and his idea of a pleas­ant week­end was to learn a new lan­guage. And he was giv­ing a con­cert in Peek­skill, and I call it an inoc­u­la­tion for Amer­i­ca. You know when you get a nee­dle inoc­u­lat­ing you against small­pox, your arms swells up but your body is alert­ed and does not get small­pox. That’s what hap­pened in Peek­skill in 1949. These were fas­cists who threw stones at ten to fif­teen thou­sand peo­ple. Man! I was build­ing a chim­ney and I put into it two stones, one of them the size of a ten­nis ball and the oth­er was a piece of tar­mac from the edge of the road. It came all the way through our win­dow, every win­dow, except the rear win­dow, was splin­tered by stones. But two things came all the way through. I cement­ed them into the front of my chim­ney so I would nev­er forget.

Well, [after­ward] there were signs in Peek­skill [in sup­port of the riots]: ​“Wake up Amer­i­ca! Peek­skill did.” I remem­ber a friend in Eng­land said, ​“That’s the same kind of sign they had in Ger­many after Crys­tal Night.” In Munich, they threw stones through the plate glass win­dows of store which were owned or run by Jews, and the signs said, ​“Wake Up Ger­many! Munich did” — and through­out Ger­many, stones were thrown through the plate glass win­dows of Jews.

It didn’t work in Amer­i­ca. Peo­ple through­out Amer­i­ca [saw] pic­tures of women with babies in their arms and blood stream­ing down. Wasn’t a pret­ty pic­ture and appar­ent­ly they didn’t like it.

Toward the end of the night, Seeger expressed his belief in what will save the human race:

Here’s a clip of him singing that night:

Mike Elk wrote for In These Times and its labor blog, Work­ing In These Times, from 2010 to 2014. He is cur­rent­ly a labor reporter at Politico.
Have thoughts or reactions to this or any other piece that you'd like to share? Send us a note with the Letter to the Editor form.
More articles by Mike Elk
Labor
Steve Early on Labor Reporting: ‘Unions Can Be Thin-Skinned About Criticism’
Labor
Verizon Wireless Workers Make History in Brooklyn
Labor
Emails Show Sen. Corker’s Chief of Staff Coordinated with Network of Anti-UAW Union Busters
Similar articles
Feature
The Invisible Fist
The GOP respects the hand of the market, but disrespects those who work for it.
Leo Gerard, United Steelworkers President
Feature
Santa Claus-ifying Martin Luther King, Jr.
When the U.S. military tweets MLK quotes, you know things have gotten bad--for the military.
David Sirota
Feature
3 Fiscal-Cliff Truths You Won’t Hear On TV
The news media gave us a reality TV show. Here's what they left on the cutting-room floor.
David Sirota
Subscribe to our free newsletter
Fearless journalism that speaks truth to power
Limited Time: