There’s No Other Way To Spin It: Bernie Sanders Pulled Off a Huge Victory in Iowa

Who would have imagined, even a few months ago, that the Iowa caucus results would be so close?

The Iowa results should catapult him even further on the national stage, increasing his visibility in states where large numbers of voters still don’t even know who he is or what policies he believes in.

He tied with his opponent former Sec. of State Hillary Clinton, and the two split the 44 delegates almost evenly between them (23−21). Clinton only managed to win 0.3 percent more precincts than Sanders. Three days ago, the Des Moines Register poll projected he would be defeated by three points — 45-42. This poll has traditionally predicted results correctly, and yet was wrong for both parties this year — projected Republican winner Donald Trump lost to Ted Cruz by four points.

Sanders’ upset is even more notable when taken in the context of older polls. Surveys throughout the fall of 2015 predicted a Clinton victory by margins as high as 38 percent. In the summer, Clinton was expected to win by as much as 43 percent. A year ago, in February 2015, MSNBC reported a project that Clinton would win by 61 points, 68-7. 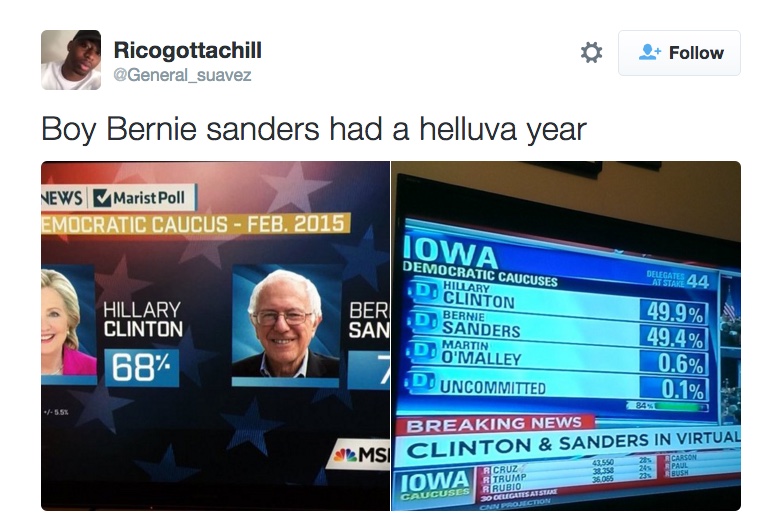 No one would have thought, when Sanders announced his campaign in May, that the wild-haired, self-proclaimed socialist would tie the former First Lady and Secretary of State in Iowa. These results are a colossal rebuke to a Democratic political establishment that has scheduled vital debates on weekends and during NFL playoff games, and poured more than $20 million in super PAC money into the election. They also represent a major win for progressives, showing that a genuine leftist candidate can be massively popular and pull an establishment candidate to the left.

The triumph for Bernie also comes as his campaign surges in other areas. Just days ago, his campaign announced they had breached a number of fundraising records. In January alone, they raised $20 million dollars, a record for his campaign. Sanders has received over 3.25 million donations from 1.3 million people, an unprecedented number at this stage of the electoral process. He has shocked every group of viewers, from political analysts to the mainstream media, with his success. Combined with the fact that Bernie is also projected to win by massive margins — as much as 31 percent — in New Hampshire, the next Democratic primary election, last night’s caucuses should force the political and media establishment to recognize him as a legitimate candidate.

The Iowa results should catapult him even further on the national stage, increasing his visibility in states where large numbers of voters still don’t even know who he is or what policies he believes in.

But despite the coming victory in New Hampshire, Sanders still faces an uphill battle. Most of these revolve around elections in southern states, like the key state of South Carolina. There, a large majority of the state’s black population is throwing their considerable influence behind Hillary, who leads in polls by an average of 29.5 points. Bernie needs to increase his name recognition and appeal among voters of color in order to win primaries in the South.

The issue of endorsements also looms over the Sanders campaign. Hillary has a vast lead over Bernie in this realm, with FiveThirtyEight granting her 465 ​“endorsement points” to his two. She has also fielded the endorsements of a number of high-profile unions, including the American Federation of Teachers, the United Food and Commercial Workers Union and the American Federation of State, County and Municipal Employees. Bernie trails here as well — the largest union that has endorsed him is the Communication Workers of America, whose 700,000 members fall far short of Clinton’s numerous multi-million member endorsements.

One of the most important endorsements of the race could be that of the AFL-CIO, the nation’s largest union federation. A number of AFL-CIO local and state branches have endorsed Bernie, but they were rebuked in July by President Richard Trumka for doing so, as such endorsements are against the federation’s rules. The two Democratic campaigns are locked in a tight battle for this endorsement, having both met with the union’s political directors last week.

Sanders has a tough slog ahead of him. But coming out of Iowa’s near-tie last night, his campaign looks stronger than ever. An uncompromising democratic socialist climbed up from single-digit Iowa poll numbers a year ago against one of the most powerful politicians in America to a draw. Even as strong a member of the media establishment as CNN’s Wolf Blitzer couldn’t call it any other way as the returns rolled in last night: ​“Even if he comes in slightly, slightly second, this is a huge win for Bernie Sanders.”

Marc Daalder is a journalist based in Detroit, Michigan and Wellington, NZ who writes on politics, public housing, and international relations. Twitter: @marcdaalder.
Have thoughts or reactions to this or any other piece that you'd like to share? Send us a note with the Letter to the Editor form.
More articles by Marc Daalder
Feature
The Left Victories That Defined 2018—And Give Us Hope for the New Year
Despite Trump's destructive presidency, the Left made important strides this year—from electoral victories to strikes, union campaigns, movement organizing and popularizing left-wing policies.
Labor
Why Every Democrat In Congress Should Support Bernie Sanders’ $15 Minimum Wage Bill
Feature
How the Left Can Seize the Supreme Court
The Supreme Court has become a political body, and after the announcement of Justice Kennedy’s retirement, it’s up to the Democrats to take it back. Here’s how.
Similar articles
Viewpoint
The Stimulus Swindle
David Sirota
Viewpoint
Snoops Get A Direct Line
That Verizon readily opened its phone logs to the feds should come as no surprise: The firm is a shining example of the revolving door between government and the telecom industry.
Brian Beutler, The Media Consortium
Viewpoint
Entrapping Inflated Threats
Terrorist "plots" exposed by the administration have been notable for their lack of credible threat and the whiff of political opportunism
Salim Muwakkil
Join our newsletter
Fearless journalism, emailed straight to you.
Subscribe and Save 66%