Cannibal Economics: Why the Black Snake Will Eventually Eat Itself

As the plagued Keystone Pipeline spilled 200,000 gallons of oil near the Sisseton Dakota reservation, on November 20, the Nebraska Public Service Commission issued a convoluted permit approval, allowing TransCanada to route the line through part of the state. In the meantime, the Dakota, Lakota and their allies stand strong.

That same day hundreds gathered for the Gathering to Protect the Sacred — a reaffirmation of the international agreement among sovereign indigenous nations to protect the environment from tar-sands projects. The Treaty to Protect the Sacred, first signed in 2013, was signed again. ​“Nothing has changed at all in our defense of land, air and water of the Oceti Sakowin,” Faith Spotted Eagle told the crowd. ​“If anything, it has become more focused, stronger and more adamant after Standing Rock.”

The assembly — sponsored by the Braveheart Society of Women, Wiconi Un Tipi, Ihanktonwan Treaty Committee and Dakota Rural Action — brought together 200 water protectors. Oyate Win Brushbreaker, a 97-year-old elder reminded those present, ​“Reaffirm the boundaries of that treaty. Keep out that black snake you have been talking about.”

The Keystone and its spill​(s)

This is a story about Wiindigoo Economics — Cannibal or Wasichu economics, if you like — an economic system that destroys the source of its wealth, Mother Earth.

We can say that it begins in the United States, where a fossil-fuel economy rules, or we can say that it begins in Canada, where 90 percent of the value of the Canadian dollar, the loonie, is based on tar sands. Regardless, an undiversified economy is a stupid idea. Even with all its oil company allies, Canada has a problem. Alberta is a land locked province and there’s no sane way to get all that oil to market. Things are unlikely to work out for Canadian tar sands interests, because at every turn they are being stopped by citizen opposition.

The Keystone Pipeline, which is not even fully operational, just showed us that it cannot operate safely. The mid-November spill in South Dakota was not supposed to happen — neither were the last five oil spills. After all, they tell us, it’s brand new pipe and TransCanada’s June 2006 pipeline risk assessment found no reason for alarm:

[T]he estimated occurrence intervals for a spill of 50 barrels or less occurring anywhere along the entire pipeline system is once every 65 years. … Applying these statistics to a 1-mile section, the chances of a larger spill (greater than 10,000 barrels) would be less than once every 67,000 years.

To be clear, Keystone has now had at least a dozen spills. They keep moving down the line. One journalist speculated the pipeline was passing a kidney stone. In a 2011 analysis, University of Nebraska engineering professor John Stansbury estimated there would be at least two major spills per year, some potentially releasing as much as 180,000 barrels. (Told you so.)

One could argue that the normalizing of pipeline spills and an impossible regulatory framework (especially in Nebraska, South Dakota and Minnesota) are to blame. But this is, in fact, the new norm. In 2016, there were 220 significant incidents, or pipeline spills in the United States, with 3,032 since 2006—those provide a stark reminder of the environmental hazards of an aging pipeline infrastructure carrying fossil fuels. But new pipes have catastrophic leaks too. The total cost of these accidents since 2006 is $4.7 billion.

As for the watchdogs? Inspectors for leaks are few and far between and they have unclear regulatory jurisdiction. The United States currently has 553 pipeline inspectors (208 federal and 345 state) and each is responsible for nearly 5,000 miles of line. These inspectors work for the Pipeline and Hazardous Materials Safety Administration (PHMSA). As the number of pipelines increases, and their age increases, we are playing high-risk pipeline roulette. 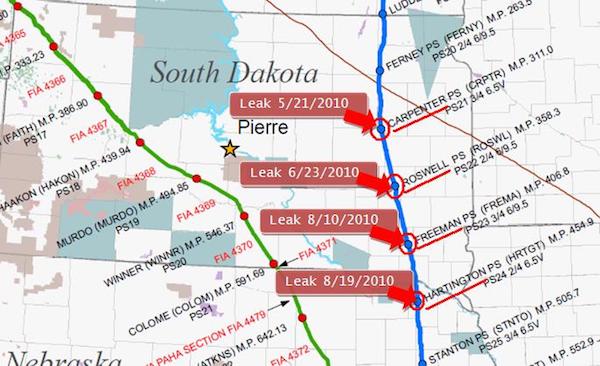 A map of Keystone XL pump station leaks between May and August in 2010. (Image: Madville Times)

While Donald Trump is busy approving these projects, another reality continues. Water Protectors challenge pipeline viability, as does oil economics.

A few months ago, four massive pipelines were being planned to bring Canada’s tar sands out of Alberta. On October 5, the longest of these proposals — the $15.7 billion Energy East — was scrapped by TransCanada. Canadian oil economists pointed to the decline of oil prices and the corresponding drop in tar-sands extraction as the driving force for project cancellation, augmented by Canadian Prime Minister Trudeau’s more stringent review of pipeline projects to include greenhouse gas emissions and downstream impacts.

One down, three to go.

While TransCanada received approval this past month for the Keystone pipeline, it still does not have a route. The Nebraska Public Service Commission voted 3-2 to give the project the go ahead, but rejected the company’s preferred route. TransCanada must now submit an application for an alternative route or appeal the decision — a process that could take up to two years. That is catastrophic in itself for a pipeline company. One thing is also for sure: any new route will face fresh opposition.

Wiindigoo Economics marches on, but tar-sands divestment is climbing, electric cars are coming online and even Fox News reported in June, ​“Keystone XL is facing a basic challenge. The oil producers and refiners the pipeline was originally meant to serve aren’t interested in it anymore.” In other words, the company has no customers for the pipeline, and a pipeline without shippers is unlikely to be built.

The companies are hedging bets, as is the Canadian government.

In mid-November, the Minnesota Public Utilities Commission held evidentiary hearings on Enbridge Line 3 (the 915,000-barrel-a-day tar-sands pipeline). In the back of the room, a Canadian official sat quietly in the audience, worried and watching. At the end of the day, he approached one of the tribal attorneys and asked if the tribes were likely to sue and stop the pipeline. It turns out TransCanada had asked the Alberta government to buy some oil shipping space on the proposed KXL Line because there were no shippers. The Wiindigoo Economics wizards of Alberta seem to be hedging their bets.

“If I was South Dakota…”

If I was South Dakota, I would be making sure that this catastrophic spill was completely cleaned up before anything else moves ahead, and maybe before TransCanada goes bankrupt. Indeed, the South Dakota Public Utilities Commission issued the Keystone permit in 2007 with 57 conditions, ranging from construction standards to environmental requirements.

The Commission may revoke or suspend that permit if the company is found to have made misstatements in its application or does not comply with the conditions. ​“If it was knowingly operating in a fashion not allowed under the permit or if construction was done in a fashion that was not acceptable, that should cause the closure of the pipe for at least a period of time until those challenges are rectified,” said Gary Hanson, one South Dakota PUC commissioner.

In the meantime, the Dakota and their allies remain committed to Mni Wiconi — water is life.

“The coming battles are going to be new, not like the ones in the past, and will demand all our strength,” Lakota organizer Judith LeBlanc writes on Our​Future​.org. ​“The traditional indigenous practice is that you must respond to adversity with courage, humility, compassion and love of community as we always have. The NO KXL movement is being built from a spiritual starting point that’s rooted in the traditional Lakota, Dakota culture and origin stories, in the grassroots and in sovereign treaty rights. … Native peoples have a legal, moral, spiritual and inherent right to be caretakers of the planet.”

At the Gathering to Protect the Sacred, Arvol Looking Horse tells the crowd, ​“We have been here before. Time and time again we have faced this invasion in our camps and our communities. But we always prevail.”

Julian Brave Noisecat was there as well: ​“After the Treaty to Protect the Sacred was signed, we came together to dance in victory. As the drummers hit the honor beats, we raise defiant hands. Women clutch red scarves symbolizing scalps and emblematic of the victory our people and planet so desperately need right now.”

The path forward for Keystone XL remains full of peril. Landowners, tribes and opponents of the pipeline have time to organize an appeal, and more than 5,000 people have signed up to join indigenous people in acts of civil disobedience when and if construction begins.

Winona LaDuke is Anishinaabe, a writer, an economist and a hemp farmer, working on a book about the Eighth Fire and the Green New Deal. She is ready for the Green Path, and would prefer not to spend her golden years cleaning up the messes of entitled white men. LaDuke lives and works on the White Earth reservation in northern Minnesota, where she founded the White Earth Land Recovery Project. She is program director of Honor the Earth and a two-time vice presidential candidate with Ralph Nader on the Green Party ticket.
Have thoughts or reactions to this or any other piece that you'd like to share? Send us a note with the Letter to the Editor form.
More articles by Winona LaDuke
Feature
How To Build the Zero-Carbon Economy
The Green New Deal sets an ambitious goal. Here’s how to get there.
Rural America
The Rights of Wild Rice
Rural America
The Renaissance of Tribal Hemp
Similar articles
ViewpointRural America
No, More Pipelines Aren’t the Solution to High Gas Prices
Reviving Keystone XL wouldn’t lower gasoline prices but it would increase carbon emissions, environmental destruction and toxic pollution.
Ted Williams
ViewpointRural America
GDP: A Countdown to Doom
The numbers we use to measure the economy’s recovery from Covid also measure the rate at which we barrel into ecological catastrophe.
Joseph Bullington
Rural America
Racing to Save Languages and Cultures, Native American Tribes Rapidly Roll Out Vaccines
Covid-19 has killed Native people at a faster rate than any other group in the U.S., but vaccine rollout in Indian Country has so far been a success story.
Alex Brown
Join our newsletter
Fearless journalism, emailed straight to you.
Subscribe and Save 59%