Our 2021 Spring Sustainer drive ends Sunday—don't miss your chance at our best offer of the year.

The United Mine Workers of America feel certain God is on their side in the fight against Peabody Energy.

​“Moses didn’t send a fax to Pharaoh. Moses didn’t send an email. He never texted Pharaoh. Moses went to Pharaoh. We are about to go see Pharaoh and he resides in that big office up at Peabody,” exclaimed Cecil Roberts, president of the United Mine Workers of America (UMWA), at a January 29 rally in St. Louis. Roberts, who honed his oratory skills as a self-proclaimed ​“backwoods Baptist preacher” in his hometown of Cabin Creek, W. Va., was there to fire up a crowd of about 1,000 miners, most dressed for battle in the UMWA’s trademark camouflage.

'Millionaires and billionaires, when they die, die with great dignity because they've got healthcare. I've got a message: Our pensioners and our widows are just as good if not a whole of hell of a lot not better than these millionaires and these billionaires.'

Technically, the miners were up against two Pharaohs: mining giant Peabody and its spinoff company, Patriot Coal, which is in bankruptcy proceedings at the St. Louis court across the street from the rally. The miners are furious over Patriot’s attempts in court to be relieved of its pension and healthcare obligations to more than 10,000 active and retired miners and another 10,000 beneficiaries.

But in the UMWA’s eyes, Peabody is the real villain. According to union estimates, 90 percent of Patriot’s retirees are former Peabody miners who ​“never worked a day in their life” for Patriot. The UMWA charges that Peabody created Patriot as a vehicle to shed its retiree obligations. As evidence, the union cites the fact that when Peabody spun off Patriot Coal in 2007, it handed Patriot three times as many retirees as active workers and $557 million in retiree healthcare obligations. Within five years, Patriot had filed for bankruptcy.

If Patriot is successful in shedding some or all of its retiree obligations in bankruptcy court, the ruling could have a ripple effect in the industry. Should other coal companies be inspired to try the same tactic, tens of thousands of retired miners, their bodies battered from decades in the mines, could be left to make tough choices between medical care and poverty in their old age. Thus the battle against the Patriot Coal bankruptcy is literally a life-or-death fight for many.

That’s the case for Kevin Luthy, a UMWA Local 5958 member who spoke at the rally and has worked for 31 years in a Chapel Hill, W. Va. mine — first for Peabody, then for Patriot.

​“I have a stage three and stage four cancers in my lymph nodes. Right now it’s in remission, but there is a high risk of it coming back,” Luthy told the crowd. ​“If I don’t have healthcare when I retire, I have no choice but to keep working.”

​“I’m 55,” Luthy continued. ​“I have been promised for 31 years that when I was 55 I could retire with full benefits, and that’s not going to happen.”

​“We simply shouldn’t allow companies to shift their obligations to others and avoid all future responsibility. That’s a terrible precedent,” says Sen. Jay Rockefeller (D‑W. Va.), who has introduced federal legislation to protect the pensions of Patriot Coal retirees. ​“Those companies have a moral obligation to the workers who gave so much of themselves—and I intend to make sure they are held accountable.”

To many UMWA members, the Patriot Coal bankruptcy fight is also about honoring those who came before them.

​“When my father was dying, God bless his soul, he had 50 some years in the United Mine Workers union,” Roberts told the assembled miners. ​“He signed his first card up in the woods so nobody would know he was joining the union! … People like my father built this, and I am not gonna stand idly by while somebody takes away what my daddy built.” 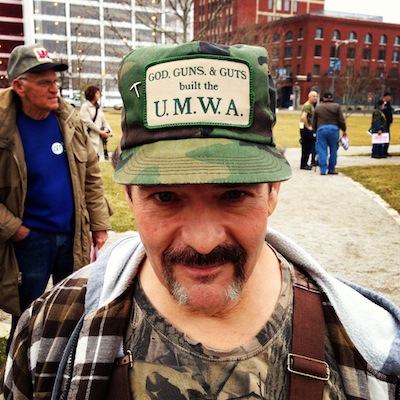 The hats allude to the Battle of Blair Mountain in 1921, when 10,000 UMWA miners took up guns after being attacked by local law enforcement and coal operators during a labor dispute over the right to form a union. More than 100 miners would die in the largest armed rebellion since the Civil War, which estabilshed UMWA’s reputation as a union that fights back.

Men like Roberts’ father, who were forced to join the union in secret, risked their lives to fight for the union benefits. And the miners today are angry to see those same benefits threatened by Patriot Coal.

​“When my father was dying he had the best healthcare in the world. The doctors were all over him trying to help him. The nurses were giving him daily the best medicine available. He died in great dignity,” said Roberts at the rally. ​“Millionaires and billionaires, when they die, die with great dignity because they’ve got healthcare. I’ve got a message: Our pensioners and our widows are just as good if not a whole of hell of a lot not better than these millionaires and these billionaires.”

On March 14, Patriot Coal filed a motion in federal bankruptcy court in St. Louis to modify its collective bargaining agreements to reduce its payments to retirees. The company, which is currently on the hook for $1.6 billion in retiree obligations, has proposed instead to create a trust fund for retiree pension and healthcare obligations that would start at $15 million and go up to a maximum of $300 million. The UMWA considers such a fund woefully inadequate.

​“We very much regret the necessity of these changes to our employees’ and retirees’ wages and benefits,” said Patriot Coal CEO Bennett K. Hatfield in a statement announcing the move. ​“However, these actions are necessary for Patriot to become viable and continue to provide more than 4,000 jobs. We believe the alternative of liquidating Patriot would do far greater damage to the employees and retirees who depend on this company.”

Roberts and the UMWA do not dispute Patriot’s claim that it does not have the money to meet its obligations. They place the blame squarely on Patriot’s parent companies: Peabody and another mining behemoth, Arch Mineral. (In 2005, Arch spun off four of its mines and many of its retiree obligations to a company called Magnum Coal, which was acquired by Patriot in 2008, along with another $500 million in retiree obligations.) Roberts jokes that Patriot Coal should join the UMWA’s ERISA lawsuit against Peabody and Arch, on the grounds that it was designed to fail.

Peabody Energy has disputed that charge, telling the Charleston Gazette in October that Patriot started out as ​“a completely viable company” and was subsequently affected by ​“substantial events” including ​“sharp declines in natural gas prices; the softening of the global steel markets; and more burdensome regulations.”

Even without the [recent] drop in natural gas prices and the development of fracking, it would have been nearly impossible for Patriot to remain solvent. The company’s business model could only make money if coal was priced at or above record high. … From a financial point of view this venture seems to have been created to fail in the long-run unless the most optimistic outcome for eastern coal was obtained.

For its part, Arch Mineral responded to In These Times’ queries by distancing itself from Patriot. A company spokesperson stressed that Arch had never dealt directly with Patriot, but only with Magnum.

A battle in the here and the hereafter

Despite the complex explanations from Peabody and Arch, many of its retirees view the companies’ actions in much simpler terms. ​“It’s pretty low-life,” protester Larry Knisell, aged 63, told me at the rally. Knissell suffers from PTSD and Agent Orange poisoning from his time in Vietnam, as well as black lung from his service in the mines. 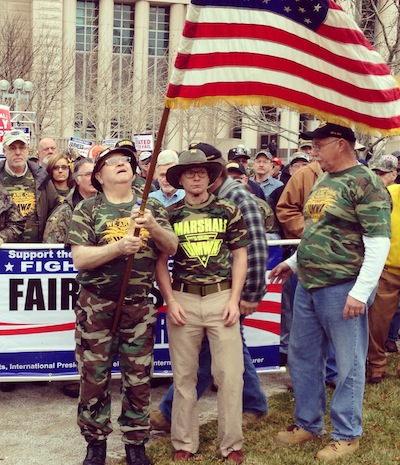 Later in the day, after the miners marched from the bankruptcy court to Peabody’s nearby corporate headquarters, Knisell was arrested, alongside 10 other nervous men, several of them in their ​’70s and strapped to oxygen tanks in order to ward off the effects of black lung. The miners hope that civil disobedience will draw attention to the immorality of Peabody’s actions and help persuade the bankruptcy judge to take their side.

Since those initial arrests, more than 40 UMWA miners and retirees have been arrested on four separate occasions outside of Peabody’s headquarters as part of UMWA’s strategy to keep public attention on the company. UMWA members and retirees plan to keep applying heat with more mobilizations, including a large rally in Charleston, W. Va., on April 1.

​“I believe that these protests [will] keep growing … because there is a very basic immorality associated with denying healthcare to workers who sacrificed their bodies to build a billion-dollar company,” says Larry Miller, 62, a retired Patriot coal miner from Hartford, Ky. ​“But there is also a real hunger by the workers in this country for fairness. Immorality is the spark that [can] transform the Patriot Coal protest into a true movement, with the UMWA as the [first] phalanx.”

Indeed, UMWA’s retirees appear to be inspired by a unifying belief that their battle is greater than themselves..

​“Somebody said to me, ​‘You may not get justice over here at the courthouse,’ and I said, ​‘Well I know where the ultimate justice comes from,’” Roberts told the crowd at the rally. ​”There will be justice, because we will all get judged someday. We are going to get judged by how we treat the least of these. Peabody and Arch will be judged very poorly”.

Mike Elk wrote for In These Times and its labor blog, Working In These Times, from 2010 to 2014. He is currently a labor reporter at Politico.
Have thoughts or reactions to this or any other piece that you'd like to share? Send us a note with the Letter to the Editor form.
More articles by Mike Elk
Labor
Steve Early on Labor Reporting: ‘Unions Can Be Thin-Skinned About Criticism’
Labor
Verizon Wireless Workers Make History in Brooklyn
Labor
Emails Show Sen. Corker’s Chief of Staff Coordinated with Network of Anti-UAW Union Busters
Similar articles
Feature
Marco Rubio’s Prison Problem
As the FBI investigates $120 million in subsidies for a new private prison in Florida, the new U.S. senator could end up in the hot seat over close ties to prison operator Geo Group.
Beau Hodai
Feature
In Chicago, a Billionaire-Backed Candidate and Police Are Trying To Oust a Progressive Prosecutor
Kim Foxx's office has reduced incarceration rates by nearly 20% and taken major steps toward reform. Now, she's under attack.
Taylor Moore
Feature
Inside the World’s Deadliest City
Juarez’s anarchy cannot be separated from American policy and addictions, says journalist Charles Bowden
Jeremy Gantz
Join our newsletter
Fearless journalism, emailed straight to you.
Subscribe and Save 66%