How Colleges and Universities Are Defying Trump

The student campaign to make schools into sanctuaries for undocumented immigrants. 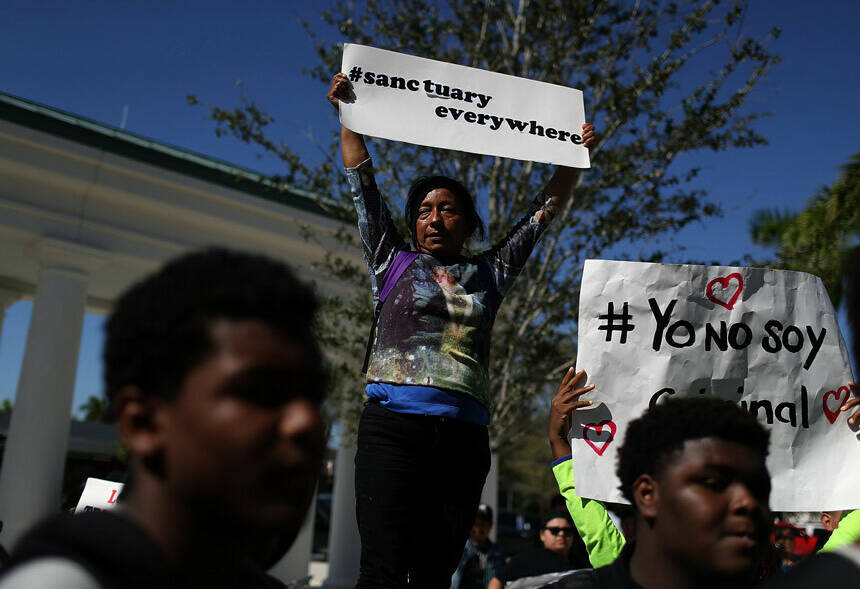 More than 1,000 stu­dents and fac­ul­ty at New York Uni­ver­si­ty walked out of class­es on Nov. 16, 2016, as part of a nation­wide day of actions to protest Don­ald Trump’s pro­posed immi­gra­tion poli­cies. Assem­bled in Wash­ing­ton Square Park, they formed a ​“sol­i­dar­i­ty cir­cle,” with ​“those who feel least tar­get­ed by a Trump pres­i­den­cy” form­ing the out­er ring. Those who felt most vul­ner­a­ble stood at the cen­ter, where many gave tes­ti­mo­ny about what life has been like since Trump’s victory.

At least 28 college and university presidents have issued statements of support for undocumented students following the walk-outs.

Claudia Carvajal, the first speaker, decided to attend law school at NYU after navigating the thorns of U.S. immigration policy with her family, who emigrated to the United States from Mexico when she was a child. In 2012, Carvajal was granted temporary protection from deportation through the Obama administration’s Deferred Action for Childhood Arrivals (DACA) program, but Donald Trump has indicated that he may revoke DACA within his first 100 days in office. If he follows through, as many as 750,000 recipients could lose protection.

“Trump’s immigration policies have the potential to devastate millions of lives,” Carvajal told the crowd, her words echoed out by a “human microphone.” “My own family—who have been in this great nation for over 22 years—could be ripped apart. I have had some of the most difficult conversations in my life this past week … about things like where my 8-year-old brother should go and who he should stay with if we are torn apart.”

“We cannot afford to wait and see what happens,” another speaker said. “Why should we assume the best of [Trump] when he has said the worst?”

Carvajal and her fellow students aren’t waiting. Instead, they’re calling on NYU to become a “sanctuary campus” that offers protection to undocumented students facing deportation. “With a governmental shift that poses an increasing threat to our safety, we turn to our schools for asylum,” students wrote in a petition to the university’s administration.“We know our campus has the potential to be a sanctuary, and we demand that potential be realized.”

Movimiento Cosecha, an immigrant rights organization that launched just under a year ago, helped coordinate the nationwide push for sanctuary campuses. There is no official definition of the term, and the designation is often more political than legal. But Cosecha’s vision involves a combination of university policy and active campus solidarity. School administrators can refuse to cooperate with federal immigration authorities by withholding student information and barring enforcement officers from campus; students can step in to protect peers from government raids, as well as hate speech and intimidation.

In the weeks before the election, the group held a series of sit-ins outside of Trump Tower in New York to protest his anti-immigrant rhetoric. Following his win, the idea for the sanctuary campus campaign emerged “organically,” says Thaís Marques, a graduate of Rutgers University-Newark and a member of Cosecha. In the hours after Trump took the electoral college, Marques set up a web page, asking anyone affiliated with an academic institution to sign petitions aimed at their college leadership. Hundreds signed up, and after getting on a conference call with Cosecha and receiving a few planning resources, point people for each campus got started planning actions.

The movement has already had some victories. At press time, at least 28 college and university presidents had issued statements of support for undocumented students following the walk-outs. But only a few—including Reed and Wesleyan Colleges—have explicitly adopted the “sanctuary campus” label.

NYU falls into the first group. On Nov. 29, 2016, President Andrew Hamilton released a statement affirming that the university does not allow federal agencies entrance into campus buildings without permission, that student records are subject to privacy restrictions and that the university’s nondiscrimination policy applies to all members of the campus community, regardless of immigration status. “Many of you want to know that we are affording our full protection and support to everyone who lives, studies, and works at NYU,” he wrote. “I want to assure all of you that that is our goal.”

Carvajal says that while these policies are important, they don’t go far enough—declaring NYU a sanctuary campus is key. “In our current political climate, the rhetoric used by politicians and institutions is critical,” she says. “Anything short of a declaration that explicitly sends a message to the incoming administration … falls short.”

By declaring itself a sanctuary, a community sends a message that it rejects the hate and intimidation that many immigrants have faced in the wake of Trump’s win, say organizers. The Southern Poverty Law Center reports that in the 10 days following Trump’s election, it received nearly 900 reports of harassment and intimidation.

As it stands, universities have a special ability to shield students from deportation. A 2011 Immigration and Customs Enforcement (ICE) memo stipulates that when possible, enforcement should not take place in “sensitive areas,” including schools and hospitals. The memo is not binding policy, but ICE has generally followed it.

Under a Donald Trump administration, however, all bets could be off. Trump has already promised to revoke taxpayer funding from so-called sanctuary cities that refuse cooperation between police and immigration authorities. Though he has yet to comment on the call for sanctuary campuses, Texas Republican Gov. Greg Abbott said on Dec. 1, 2016, that he would cut funding to all state universities that adopted this designation.

Yet immigrants have faced grave political circumstances many times before, she notes. In 2006, mass protests erupted in opposition to the bill introduced by Rep. Jim Sensenbrenner (R– Wisc.), which would have made immigrating without legal papers a felony. Some 40,000 students walked out of class in the Southern California area alone. The bill was eventually defeated.

Faced with this large a show of people power, Trump might blink as well. But immigrants’ rights organizers know they need allies. Ultimately, says Marques, the demand for sanctuary is powerful because it forces universities to answer, “What side are you on?”

Kate Aronoff is a Brook­lyn-based jour­nal­ist cov­er­ing cli­mate and U.S. pol­i­tics, and a con­tribut­ing writer at The Inter­cept. Fol­low her on Twit­ter @katearonoff.
Have thoughts or reactions to this or any other piece that you'd like to share? Send us a note with the Letter to the Editor form.
More articles by Kate Aronoff
Viewpoint
Some Economists Say Carbon Taxes Are a Silver Bullet. The Reality Is More Complicated.
A carbon tax isn't a bad idea, but by itself could be politically dangerous.
Feature
How To Bury the Fossil Fuel Industry
We need to halt subsidies, enforce stricter regulations and bring fossil fuel corporations under public control.
Feature
Inside Geoengineers’ Risky Plan To Block Out the Sun
Some scientists say it’s necessary to save the climate. An indigenous-led opposition says it will only save the fossil fuel economy.
Similar articles
Dispatch
The Underground Migrant Support Network
Meet the Chicago chapter of the "aboveground railroad" providing assistance to asylum seekers.
Eleanor Colbert
Dispatch
“Words Can’t Articulate the Joy”: Wisconsin Workers Celebrate Scott Walker’s Defeat
As thrilling as defeat of an archenemy may be, activists here take nothing for granted.
Kathy Wilkes
Dispatch
This Union Nurse and Outspoken Progressive Could Become Iowa’s Next Governor
Cathy Glasson is running an insurgent campaign on a platform of Medicare for all, a $15 minimum wage and ending “right to work” laws.
Theo Anderson
Subscribe to our free newsletter
Fearless journalism that speaks truth to power
Limited Time: