What the Candidates are Saying About Agriculture

The next president’s views on trade and immigration reform — how our goods are sold and who’s allowed (or not) to help get them ready for market — will have far-reaching implications for all aspects of the economy. Farming is no exception. When it comes to federal agricultural policy, the US Department of Agriculture becomes an extension of the White House, as do the department’s 29 different agencies. The heads of these agencies (who, like the cabinet secretary, are appointed by the president) are tasked with ​“providing leadership” on everything from ​“food, agriculture, natural resources, rural development, nutrition, and related issues based on public policy, the best available science, and effective management.” They also oversee a workforce of nearly 100,000 people and a 2015 operating budget of $146 billion.

In other words, how the USDA’s hundreds of programs are conceived, funded and managed could vary greatly depending on who gets elected. In addition to hours of televised debates and town halls, all five candidates make use of an ​“issues” tab on their official websites to articulate their visions and agendas. As it happens, only Bernie Sanders on berniesanders​.com and Hillary Clinton on hillaryclin​ton​.com provide information about where they stand on issues relating to the rural economy, farming and the USDA. But the gist of each candidate’s agricultural agenda can often be extrapolated from their general pro- or anti-regulatory, corporate friendly/​unfriendly stance and rhetoric.

As far as the Republican candidates go, they have said little about the USDA and agricultural policy.

Ted Cruz put the department’s Catfish Inspection Program onto his list of 25 ​“agencies, bureaus, commisions and programs” he’d like to eliminate (the one listed right under the Intergovernmental Panel on Climate Change).

John Kasich, while campaigning in Iowa last September, was asked about federal support for corn ethanol. He explained, ​“Look, I was for killing the ethanol subsidy when I was in Congress, let’s not be confused. Then I became governor, and I’ve got people working these operations. So, I’m not about to kill them, but these subsidies that exist need to be phased out over time.”

According to the American Conservative, ​“Donald Trump’s only stated positions on farming put him directly in the pocket of Big Ag.” On the other hand, Trump’s dismay at Ben Carson’s early lead in the Iowa polls last October prompted the well-publicized, later-removed retweet: 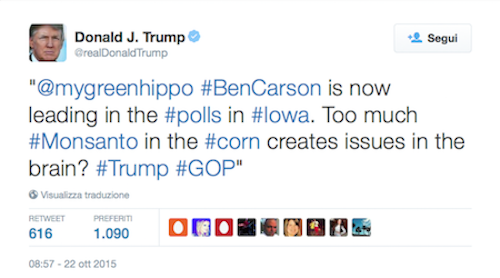 What the Sanders campaign has put in writing

Under Improving the Rural Economy, Sanders’ website points out that Abraham Lincoln referred to the USDA as the ​“People’s Department” and then goes on to state: ​“Senator Sanders will ensure that the agency lives up to this name by expanding its services for new and underserved farmers.” His agricultural priorites are as follows:

Family farms instead of factory farms

It is unacceptable that the top 10% of farms collect 75% of farm subsidies, while the bottom 62% do not receive any subsidies. We have to adopt policies that will turn this around.

In 1966, farmers received 40 cents for every dollar Americans spent on food. Today, they only receive 16 cents on the dollar.

As President, Senator Sanders will reverse this trend by:

What the Clinton campaign has put in writing

Hillary Clinton’s Plan for a Vibrant Rural America states, ​”America’s rural communities lie at the heart of what makes this country great. The affordability of our food, the independence and sophistication of our energy supply, and the strength of our small communities all depend on a vibrant rural America.” Acknowledging that the recent economic recovery has yet to make an appearence in many rural communities, the briefing adds, ​“Unemployment and poverty are too high, commodity prices have recently declined, and necessary components to economic security — including accessible health care and affordable education… .” Her agricultural priorities are as follows:

Raising agricultural production and profitability for family farms. A strong agricultural economy remains a critical cornerstone of a vibrant rural economy. Farmers and ranchers supply food for America’s dinner tables, invest in farm machinery and supplies, and provide domestic energy resources that fuel small businesses. The agriculture economy also drives America’s larger economic success — accounting for about $800 billion in economic activity each year and supporting one out of every eleven jobs in the country. To ensure that America’s farmers and ranchers have the tools they need to succeed Clinton will:

The candidates on GMOs and the ​“right to know” labeling initiative

Last July, the House of Representatives passed the fiercely contested Safe and Accurate Food Labeling Act of 2015 — an inaptly named piece of legislation aimed at preventing states from requiring the mandatory labeling of foods containing GMOs (in favor of voluntary measures). Opponents who believe Americans have a right to know what they’re eating and where it comes from began referring to the law as the Denying America’s Right to Know (DARK) Act. Sustainable food activists keenly aware of the detrimental health and environmental consequences of corporate agriculture’s standard operating procedures nicknamed it ​“Monsanto’s Dream Bill.”

On March 16, however, the Senate struck down the DARK act effectively guaranteeing that the debate over labeling will continue. Here’s a brief look at where each candidate stands on GMOs:

Bernie Sanders: In 2014, Vermont became the first state in the nation to pass a bill making the labeling of GMOs mandatory and it goes into effect this July. According to feelthe​bern​.org, ​“Bernie supports allowing states to require labels on foods containing ​‘genetically modified organisms’ (GMOs) based on the consumer’s right-to-know, but does not believe that GMOs are necessarily bad.” Sanders has stated that he believes biotech companies are ​“transforming our agricultural system in a bad way” and his support of family farms over factory farms is consistent with his broader message of ending corporate control of our political and economic system.

Hillary Clinton: The Clinton Global Initiative has long been criticized for its ties to corporations, including its international promotion of Monsanto’s drought-resistant seeds. And not unlike critics of Hillary Clinton’s ties to Wall Street, many sustainable food advocates question her commitment to enacting policies that run counter to the interests of those the who’ve supported past and present campaigns. In What IS Hillary Clinton’s Stance on GMOs, for example, Jeffery Smith points out that in 2014 Hillary Clinton was the ​“paid keynote speaker for the world’s largest GMO trade association, the Biotechnology Industry Organization (BIO).” According to truth​-out​.org, Monsanto lobbyist and senior advisor to Clinton’s presidential campaign, Jerry Crawford, bundled $151,727 in contributions for Clinton over the quarter ending on December 31. In regard to her current position on GMO labeling, however, at a town hall meeting in Fairfield, Iowa, last December, Clinton said, ​“Look there’s a right to know. You should be able to have the information that you can make your judgment about.’”

John Kasich: No position found. (Readers, please share any information you may have on this in the comments section below).

Ted Cruz: ​“We need to stand up to the hysteria. For families, for parents, that don’t want to feed their kids GMOs, in the private marketplace, there has grown up an abundant market. You can go and purchase organic, if you want to pay more … We shouldn’t let anti-science zealotry shut down the ability to produce low-cost, quality food for billions across the globe.”

Donald Trump: Aside from the Trump campaign’s retweet implying Monsanto’s genetically modified corn had impaired the neurological functioning of Iowa Republicans, no additional information was found. (Readers, please share any information you may have on this in the comments section below).

John Collins is the editor of Rural America In These Times. He lives between Minneapolis and La Pointe, Wisconsin, a village on Madeline Island in Lake Superior.
Have thoughts or reactions to this or any other piece that you'd like to share? Send us a note with the Letter to the Editor form.
More articles by John Collins
Rural America
The Community Rights Movement to the New Hampshire House: Let the People Decide What’s Best
Rural America
Democrats Have Gone off the Rails in Rural America. Can a New Report Get Them Back on Track?
Rural America
How Much Nitrate Is in Rural America’s Water?
Similar articles
Rural America
Swamped by Vacation Rentals, Small Towns in the West Are Fighting Back
An explosion in the number of short-term rentals is contributing to an affordable housing crisis in the rural West. Some communities have responded by banning them.
Erika Bolstad
Rural America
As Meatpackers Stoked Fears of a Shortage, U.S. Meat Exports Increased
Citing imminent shortages, the meat industry lobbied to keep packing plants open as Covid-19 tore through workers’ ranks. At the same time, U.S. meat exports increased.
Madison McVan
Rural America
Public Lands Make Up a Third of the U.S. and They're Wildly Popular
Professor John Leshy explains how, in a country that glorifies private property, the public came to own so much of the landscape.
Rhett A. Butler
Join our newsletter
Fearless journalism, emailed straight to you.
Subscribe and Save 59%