The president-elect is missing a mandate in more ways than one. 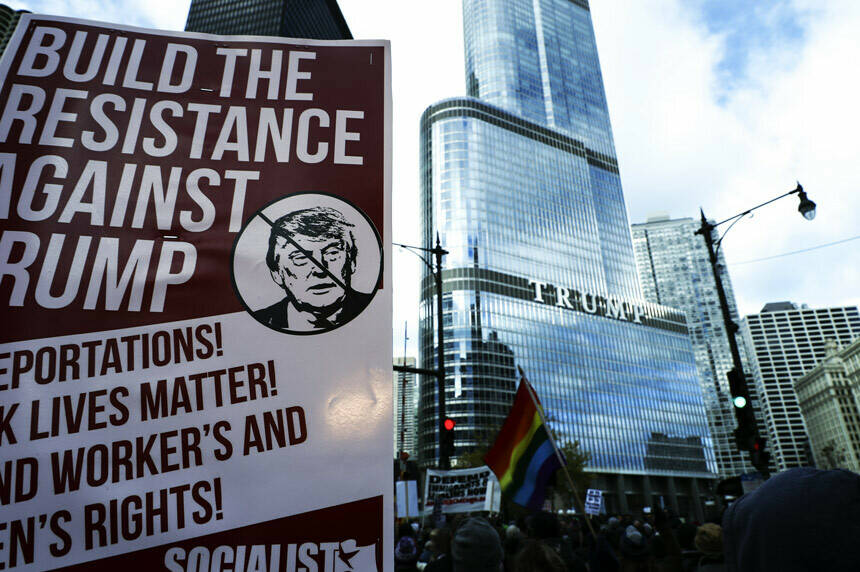 Miffed that millions regard his election as illegitimate, and throwing a tantrum over the recount efforts in Wisconsin, Michigan and Pennsylvania, Trump is trying to manufacture what he desperately desires and does not have: a mandate. Indeed what Trump has is an anti-mandate, something progressives need to reiterate as we gear up for the long months and years of resistance. Given his whopper flip-flops since the election—notably the switch from “lock her up” to “I don’t want to hurt the Clintons” and from that big, beautiful wall to “some fencing”—he seemed to sense this, however primitively.

Trump has an anti-mandate on climate change. He referred to it as “a hoax.” But 64 percent of Americans say they worry a “great deal” or “fair amount” about climate change, and nearly 6 in 10 believe the effects have begun, according to Gallup. Trump pledged to “cancel” U.S. participation in the Paris climate agreement; one survey shows 71 percent of Americans support the deal.

On LGBTQ rights, Trump, his rabidly homophobic Vice President-elect Mike Pence and equally homophobic domestic policy adviser Ken Blackwell also have an anti-mandate. Trump opposes marriage equality, while 55 percent of Americans in a May 2016 Pew poll supported it. Gallup reports that nearly 70 percent agree “gay or lesbian relationships between consenting adults” should be legal, providing an anti-mandate for Pence's and Blackwell’s belief that homosexuality is a sin and that gay people can and should be “rehabilitated.”

Trump also has an anti-mandate for his promise to appoint judges to the Supreme Court who vow to overturn Roe v. Wade. Fifty-six percent of Americans think abortion should be legal in all or most cases.

Trump has an anti-mandate to further cut taxes for the rich and corporations. Sixty-one percent of Americans say upper-income people pay too little in taxes. Even when asked about using the tax code to “re-distribute wealth” as opposed to, say, “rebuild infrastructure”—52 percent agree that the wealthy should pay more.

Where Trump may indeed have a mandate is job creation. Of course, his promises of bringing back jobs in coal country, for example, are patently false, given that coal is being overtaken by cheaper natural gas. More doable is his promise to rebuild the nation’s infrastructure, which would create thousands of new jobs and is long overdue. But here, he would hardly have a mandate from the fiscal-hawk Republican Congress, as they blocked an investment package in 2009 and another proposal by Bernie Sanders in 2015 to allocate $478 billion for infrastructure, which would have been funded by closing corporate tax loopholes. But then, maybe our fat-cat-in-chief will scrap the investment plan and just turn our highways, bridges and airports over to corporate America.

Trump’s initial post-election recanting—oh, maybe he’ll have an “open mind” about climate change, and, who knew, torture may not work—was supposed to make us feel that he is not the ideological zealot we saw on the campaign trail. Let’s not buy it, especially in the wake of his red-meat Cincinnati “thank you” speech, which revived “the wall,” attacked the “extremely dishonest press” and stoked chants of “lock her up.” As we mobilize to contribute to and work for a host of progressive organizations, let’s keep the mantra going: anti-mandate, anti-mandate.

Susan J. Dou­glas is a pro­fes­sor of com­mu­ni­ca­tions at the Uni­ver­si­ty of Michi­gan and a senior edi­tor at In These Times. Her forth­com­ing book is In Our Prime: How Old­er Women Are Rein­vent­ing the Road Ahead..
Have thoughts or reactions to this or any other piece that you'd like to share? Send us a note with the Letter to the Editor form.
More articles by Susan J. Douglas
Viewpoint
Ageism Has No Place in the Presidential Election
Science tells us that age and health are two very different things.
Viewpoint
Want To Fix the Debates? Shut Down the Trump-Style Theatrics.
The sensationalist, ratings-first format needs to change—and candidates should boycott debates until it does.
Feature
Why the Weinstein Story Has Been So Huge
Until we confront rape culture as a whole, the #MeToo testimonies will continue.
Similar articles
Viewpoint
America’s Real Occupiers
Public officials who remove themselves and their families from the community they govern.
David Sirota
Viewpoint
How Baseball Explains Modern Racism
America's pastime reveals a larger lesson about conditioned behavior in an institutionally racist society.
David Sirota
Viewpoint
What Real Shared Sacrifice Looks Like
Bernie Sanders
Subscribe to our free newsletter
Fearless journalism that speaks truth to power
Limited Time: