Announcing: Bingo for a Blue Wave

Use this list of progressive ballot initiatives and candidates and play election night bingo with In These Times! 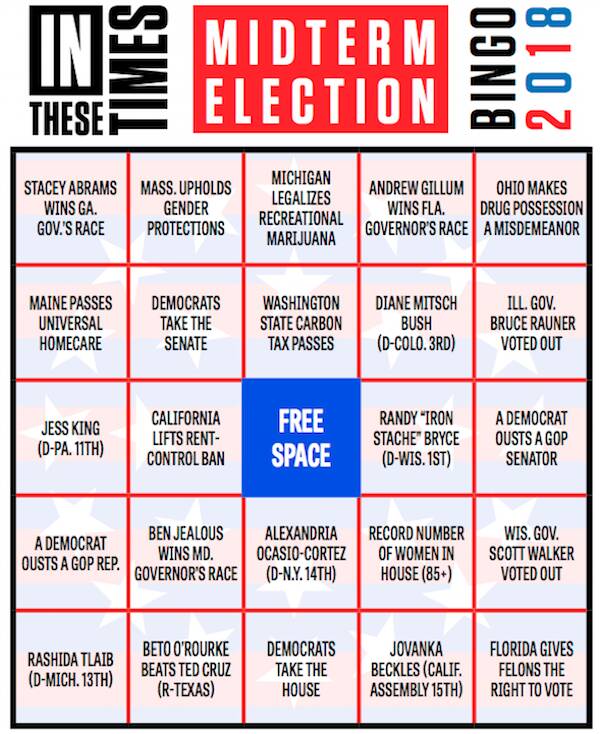 This midterm, In These Times invites you to play a real game: Elec­tion Night Bin­go! Print out these cards at home, or join us at our Elec­tion Watch Par­ty here in Chica­go. All are invit­ed to play.

We offer these bin­go cards in the under­stand­ing that the first vic­tor is not the only vic­tor, for this is not the nature of the polit­i­cal game. If pro­gres­sives achieve the blue wave they seek, by night’s end we will all be shout­ing out in uni­son, bin­go, bin­go, BINGO!

Here’s a list of the races and bal­lot ini­tia­tives we’re most excit­ed about:

Amelia Diehl was a fall 2018 intern for In These Times. Her pieces are pub­lished or forth­com­ing in Jacobin, Geez and Audia Music News.
Have thoughts or reactions to this or any other piece that you'd like to share? Send us a note with the Letter to the Editor form.
More articles by Amelia Diehl
Dispatch
On Indigenous People’s Day, Anishinaabeg Leaders March Against Enbridge’s $7.5 Billion Oil Pipeline
The pipeline’s route would carry 760,000 barrels of oil per day, crossing 15 watersheds affecting 215 lakes, and violating Ojibwe treaty rights.
Labor
Trombones on the Picket Line: Lyric Opera Orchestra on Strike For the First Time in 50 Years
Similar articles
Feature
The Blue-Green Jobs That Romney Ignores
The Clean Water Act puts the lie to Mitt Romney's refrain that the government doesn't create jobs.
David Moberg
Feature
The Billionaire Bandits Behind Paul Ryan
Author Greg Palast follows the money trail leading up to Paul Ryan's nomination.
Roger Bybee
Feature
The GOP Parties Like It’s 1984
The script of the Republican National Convention reads like a Rambo reboot, with Democrats as the villains.
Theo Anderson
Subscribe to our free newsletter
Fearless journalism that speaks truth to power
Limited Time: