The U.S. has a summer childcare crisis.

Children across America are spending memorable sunny days splashing at the pool, doing arts and crafts or attending STEM camps, but 6‑year-old Jaelyn’s summer has not been as eventful. Much of it has been spent indoors.

Summer childcare is especially tricky—difficult to find, expensive and misaligned with the schedules of working parents.

Since her elementary school let out in May, she’s been shuttled among relatives and family friends. The farthest lives 27 miles away, a 40 to 60-minute drive. Occasionally — for $25 — her former preschool teacher watches her for the day.

Jaelyn’s mother, Sheila Custard, says the best she can manage is to keep her daughter safe and occupied while she, a single parent, works Monday through Friday as a payroll specialist for a human resources management company in Aurora, Colo. Like most parents who work outside the home, her schedule does not change during the summer months.

There is a summer camp that serves Jaelyn’s age group less than two miles away. The $100 a week tuition is modest in comparison to many specialty camps—day camp costs average $199 a week and can go as high as $800 a week, according to the American Camp Association. Still, the price is too high for Custard, who is saddled with medical debt. Custard would also have to dole out an additional $50 a week for before and after care to accommodate her 8:45 a.m. to 5:15 p.m. work schedule.

Since accepting a promotion that came with a modest raise in March, Custard is $86 over the income limit for the Colorado Child Care Assistance Program, which would have covered part or all of Jaelyn’s camp costs.

So, for now, Jaelyn spends most days in the care of the 12-year-old daughter of nearby family friends, who babysits Jaelyn alone at their home while they, too, are away at work. Custard checks in by phone several times a day. For safety reasons, the girls are forbidden to play outside or walk to the neighborhood pool. They pass the time with tablets and smartphones, or goof around dancing to YouTube music videos.

“Without [these family friends] I don’t know what I would have done,” says Custard, who pays the tween babysitter what she can afford: $30 a week.

“Keeping up with all of the different places that I have to take her is so exhausting,” Custard adds, exasperation evident in her voice. ​“It’s not just the financial piece that overwhelms me. The mental stress also takes its toll.” 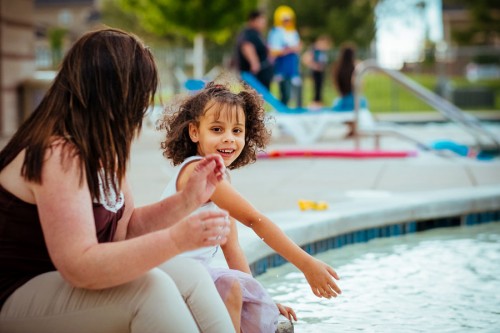 (This pool visit is a rare treat with mom. On summer weekdays, Jaelyn is babysat by a local 12-year-old. For safety reasons, they aren’t allowed to walk alone to the pool. Photo by Sebastian Fortuño)

Custard’s predicament is the norm for many working parents in the U.S.: Two in three elementary-aged children have no stay-at-home parent, the average school day is 6.5 hours and the average workday is 8 hours, making high-quality childcare a year-round necessity. Summer childcare is especially tricky — difficult to find, expensive and misaligned with the schedules of working parents, even those like Custard who work the traditional 9 to 5.

A Center for American Progress (CAP) analysis of data from the Afterschool Alliance’s America After 3PM survey, released in 2018, concluded that a typical family of four could expect to pay more than $3,000 for summer programs — about 20% of that family’s average take-home pay for the summer.

“That’s more than double the U.S. Department of Health and Human Services’ childcare affordability threshold of 7%,” notes Cristina Novoa, a senior policy analyst for early childhood policy at CAP, a liberal D.C. think tank. ​“The survey findings were eye-popping, to say the least.”

Novoa was the lead researcher on last year’s analysis and a May 2019 CAP study that asked 1,000 parents of children ages 0 to 13 in all 50 states about summer childcare. Three in four reported at least some difficulty finding care and 57% said they had to make difficult trade-offs, such as shortened work hours or unpaid time off, that resulted in substantial income losses and, many felt, threatened their job security.

Costs and affordability ranged greatly by state. Wisconsin was the most affordable: A family of four earning the state median income could expect to pay just over $1,400 for summer care for two children, 9% of the average income of a two-parent family in those months. The same family in Nevada could expect to spend more than $6,700 on summer childcare — more than half of its income over the summer months.

Children left home alone ​“are often scared and lonely,” says Marie Hartwell-Walker, Ed.D., a retired marriage and family therapist and contributor to Psy​ch​Cen​tral​.com. ​“In order to keep them safe, their parents don’t allow them to be out playing with other kids. As a result, many kids left alone don’t properly develop the social skills that come from being engaged with their peers.”

They’re also at higher risk of obesity, she says: ​“When kids are inside and alone most of the time, many eat for entertainment and as a way to deal with the boredom and loneliness they feel.” And research shows children often do not respond safely in emergencies like fires.

​“We also know that when children are bored, they can become very inquisitive in both positive and negative ways,” says Mimi LeClair, president and CEO of the Boys & Girls Clubs of Chicago, whose 20-plus Chicago-area clubs currently provide low-cost summer programming for nearly 20,000. ​“There is so much risk for our young people to become victims — or perpetrators — of violence, especially if they’re left unattended for extended periods.” Experts also say a lack of exposure to some academic programming over the summer can widen an existing achievement gap for children in lower-income families.

Kimberly Willis Green lives in suburban Henry County, Ga., and is a divorced mother of three boys (14, 13 and 9). She says that parents, like her, of children with special needs face particular summer care challenges. In 2013, her son Capers was abruptly released from a special-needs summer camp. He has mild cerebral palsy and Lennox-Gastaut syndrome, a rare form of epilepsy.

“I thought I had a [summer] plan for him that week, and basically it fell apart after two days,” recalls Green. ​“I was told he could not stay because the program’s staff was not adequately trained to administer his emergency seizure medication Diastat, which is similar to an EpiPen.”

Green, who volunteers with the nonprofit Parent 2 Parent of Georgia, a parental advocacy group for children with special needs, says many compete for a miniscule number of slots in ​“inclusive” summer programs. The few who get their children in, she says, are often saddled with higher fees, usually for extra staffers or other specialized support.

Green’s middle son, Kyle, has Asperger syndrome, a condition on the autism spectrum. Despite record numbers of diagnoses in recent years, she says many summer programs are still ill-equipped.

“I call it the ​‘invisible disability,’” Green says. ​“He struggles with social interaction and some behavioral issues. And because of those issues, kids like him are [often] dismissed from camp.”

Nina LeMieux, a single mom of three in the sleepy town of Barre, Vt., shared an emotional story with Vermont legislators in April. When the childcare facility her three children attended abruptly closed with only 20 days notice, it set off a chain reaction. LeMieux had to resign from her full-time state job with benefits to stay home with them, then ages 6, 4 and 5 months. She found replacement care in six months, but lost her savings, much of her retirement money and, finally, her apartment.

Testimony from LeMieux and others helped inspire the state legislature to pass a budget that included $7.4 million in childcare investments, including a boost for the Child Care Financial Assistance Program (CCFAP), which subsidizes both year-round and summer care.

LeMieux now works a temporary, part-time position with no benefits or paid time off with the state of Vermont. This summer, she’ll receive a CCFAP subsidy for childcare — but her out-of-pocket costs remain $165 for her three children, 31% of her monthly gross income. She’s considering moving her older kids to a school district closer to their father’s home for more childcare options.

The childcare quandary has emerged as a hot talking point among many of the 2020 presidential race contenders, including Democratic Sen. Elizabeth Warren (Mass.) and Sen. Kamala Harris (Calif.), who have proposed sweeping federal interventions. In February, Sen. Patty Murray (D‑Wash.) and Rep. Bobby Scott (D‑Va.) reintroduced the Child Care for Working Families Act.

The measure, originally introduced in 2017, would guarantee childcare assistance for low-income and middle-class families with children younger than 13. The bill would ensure that childcare cost no more than 7% of their income. Supporters are optimistic about its fate with a Democratic House majority.

CAP’s report also cites other potential solutions, such as the expansion of the federal Child Care and Development Block Grant program, which provides funding to states for after-school or summer care.

Novoa says 21st Century Community Learning Centers (21st CCLCs), the only federally funded community-based after-school and summer programs, are an underutilized resource that could be tapped. CCLCs currently serve 2 million children year-round and more than 300,000 over the summer. But Novoa believes ​“that is just a fraction of what is needed,” noting that 21 million youth are eligible.

Chicago mother Wanda Noyes agrees that policymakers should look at expanding the 21st CCLCs, as well as subsidizing affordable programs like the YMCA and the Boys & Girls Clubs of America. Noyes’ seven children ​“grew up” in Boys & Girls clubs, which kept them out of trouble and engaged academically and socially, she says. Two of her children, one a rising high school senior and the other a soon-to-be college freshman, completed a transit authority internship and a pharmacy tech training program, respectively, that they landed through the programs. Now the director of the same branch her children attended, she says she is convinced America’s childcare accessibility problem won’t change until those in power make a point of it.

“There should be a viable place for all of our kids to go, to be safe and to learn, instead of getting into trouble and being out on the streets,” she says. ​“It should be everybody’s business to make this a priority.”

Chandra Thomas Whitfield is a 2019 – 2020 fellow with the Leonard C. Goodman Institute for Investigative Reporting.
Have thoughts or reactions to this or any other piece that you'd like to share? Send us a note with the Letter to the Editor form.
More articles by Chandra Thomas Whitfield
Viewpoint
All the Options for Schooling Are Bad—But We Have to Choose Safety
On parents' impossible decision.
Viewpoint
Derek Chauvin and Amy Cooper Are One and The Same
Bogus allegations waged by white women are just as dangerous as police brutality—and come from the same callous privilege.
Feature
Black Women’s Livelihoods Will Be Yet Another Coronavirus Casualty
For many reasons, Black women are particularly hurt by the virus's economic toll.
Similar articles
Feature
Activists Push the Democrats for Real Solutions on Climate Change
The Democrats' climate platform beats the Republicans', but it doesn't go far enough.
Kate Aronoff
Feature
The Unintended Consequences of a Brexit
On June 23, British voters will decide if Britain will leave the EU—but either option carries serious economic and social consequences.
Jeff Faux
Feature
Whistleblowers Step Forward To Decry President Obama’s Drone Program
“You see someone die because you said it was okay to kill them."
Pratap Chatterjee
Join our newsletter
Fearless journalism, emailed straight to you.
Subscribe and Save 66%