Pebble Mine: “One More Indicator That We Are Undoubtedly the Dumbest Species on the Planet”

Funny how projects that would be holocausts for Earth never seem to stay dead.

Look no further than the proposed Pebble Mine in southwestern Alaska’s Bristol Bay. In 2002, after deposits of copper, gold, and molybdenum were confirmed to the tune of $300 billion, the dream of a huge open pit mine was born — with a proposal to remove 10 billion tons of rock, create two artificial lakes over four miles long, and construct a mine as deep as the Grand Canyon and as big as Manhattan.

During the Obama Administration, Alaskans and other groups successfully fought to get the Environmental Protection Agency (EPA) to declare the area off-limits to mining under a rarely-used provision of the Clean Water Act. The agency eventually declared that the mine would result in the ​“complete loss of fish habitat” due to the destruction of 22 miles of streams and more than six square miles of wetlands.

But it only took an hour after a meeting between President Trump’s EPA-head Scott Pruitt and the CEO of the Pebble Limited Partnership for Pruitt to reverse that determination. His decision now allows the permit application process to move forward.

Problem is, that part of Alaska is the last place in the world that a mine should be built. Fifty-six million sockeye salmon call Bristol Bay home — making it one of the last, great salmon fisheries on Earth. Nearly half of the world’s sockeye catch comes from this one region, supporting some 14,000 jobs, generating about $480 million annually, and feeding 4,000 year-old Alaska native communities. 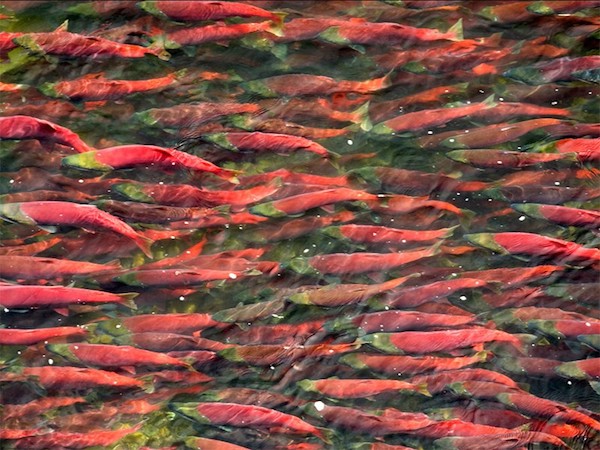 Sockeye salmon swimming in Alaska’s Bristol Bay. Note: their bodies only turn red when they reach their spawning grounds. When in the ocean, sockeye are a blue or silver color. (Image: Ben Knight / earth​jus​tice​.org)

Of course, it’s not just the Pebble Mine protections that are here today and gone tomorrow. Whether it’s uranium mining in central Virginia, coal shipping terminals in Washington, or federal land protections in the West, ecosystems and nature are just political footballs; always one election away from being trampled to death.

We treat the natural environment with less legal protections than we treat our own right to carry firearms. And that is just one more indicator that we are undoubtedly the dumbest species on the planet. While our very lives depend on clean air, clean water, and the sustenance provided by this planet, we continue to treat Earth as something that can be sold off to the highest bidder without consequence.

Enough already. The kind of change we need won’t come about because we ​“raise consciousness,” recycle more, take shorter showers or write more letters to Congress. We need a plain old revolution that elevates nature and ecosystems to the highest form of protection available under our law — that of rights. And we need to give up hope that the foxes in charge of the current henhouse will do anything to move in that direction.

Three dozen communities in the United States, including the City of Pittsburgh, have been leading the way — adopting local laws that recognize that ecosystems have rights to exist, flourish, regenerate, and to be restored when damaged. Courts in India, Colombia, and Ecuador have held that rivers, glaciers and other ecosystems possess independently enforceable rights of their own. At least two countries have placed constitutional protections for nature directly into their national constitutions.

In the United States, with the help of those who care about the river, the Colorado River ecosystem recently sued the State of Colorado for the gross malfeasance of governance that has almost killed off the River.

Let’s dance. And let the naysayers explain why it’s okay somehow to continue to treat places like Bristol Bay as just another dumping ground. They’re the same idiots that defended slavery, denied women the right to vote and stopped African-Americans from voting. They’re the same venal morons who brought us ​“corporate rights,” ​“what’s good for General Motors is good for America,” and ​“nuclear power: too cheap to meter.” They’ll say anything to anyone to continue to clutch at their avenues of wealth, control and power.

If now isn’t the time to have that fundamental battle to remove their cold dead hands from our sustainable future, then I think we’ve forgotten completely what battles are for.

Time to put our big boy pants on, and giddyup. Let’s go.

(​“Pebble Mine: Risen from the Dead” was originally published on the Community Environmental Defense Fund’s (CELDF) website and is reposted on Rural America In These Times with permission. For more information on the Rights of Nature movement, click here.)

A trailer for ​“We the People 2.0” — the 2016 feature-length documentary about corporate power in the United States and the community rights movement fighting against it. (Video: TreeTV / YouTube)
Thomas Linzey, a contributing writer to Rural America In These Times, is the executive director and co-founder of the Community Environmental Legal Defense Fund (CELDF) and serves as the organization’s chief legal counsel.
Have thoughts or reactions to this or any other piece that you'd like to share? Send us a note with the Letter to the Editor form.
More articles by Thomas Linzey
Rural America
Hey Liberal, You’re Late, but Welcome to the Local-Control Party
Rural America
No More Fairy Tales: Why the United States Needs a Whole New Operating System
Rural America
Can the Community Rights Movement Fix Capitalism?
Similar articles
LaborRural America
The Working-Class Loggers Who Saved an Old-Growth Forest
Often cast as villains in the Northwest’s environmental battles, timber workers have a connection to the forest that goes far beyond jobs.
Steven C. Beda
Rural America
Rural Areas Struggle to Compete for Nurses as They Face Dire Shortages
Covid has overwhelmed hospitals, prompting many overburdened nurses to change careers or retire early. The shortages have hit rural areas particularly hard.
Aallyah Wright
Rural America
Towns Across the West Face a Housing Crisis. More Sprawl Is Not the Answer.
The lack of affordable shelter in the region has dramatic economic and public health repercussions. Some places are working to solve the problem by building more densely.
Jake Bullinger
Join our newsletter
Fearless journalism, emailed straight to you.
Subscribe and Save 59%