The dominoes that led to the collapse were set up decades ago. 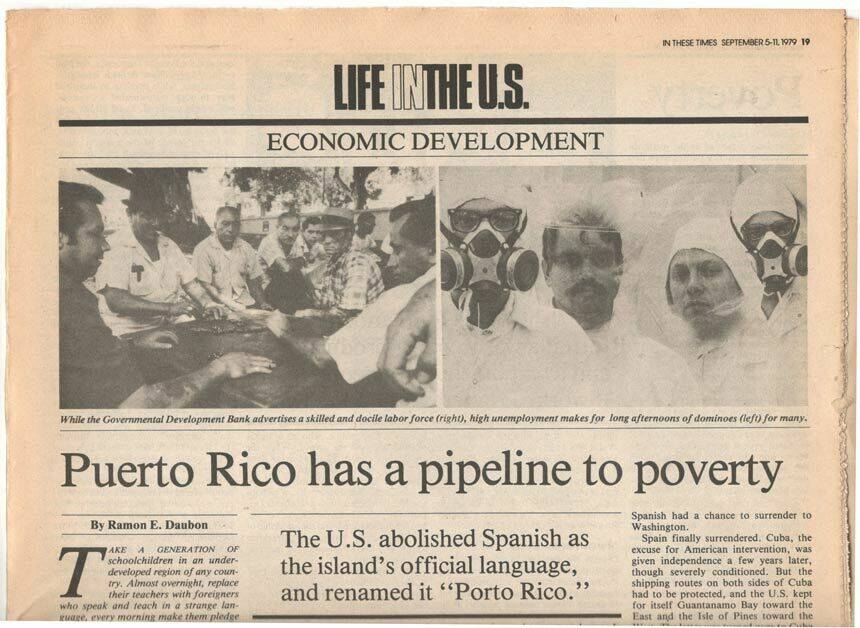 Puerto Rican economist Ramon E. Daubon wrote about the unsustainability of the island's economic system in a September 1979 issue of In These Times.

Puer­to Rico’s res­i­dents own only a small por­tion of the island’s assets, while busi­ness peo­ple on the U.S. main­land use eco­nom­ic colo­nial­ism to line their own pockets.

As outside owners came to have title or claim over the large majority of things of value on the island, the flow of repatriated earnings increased proportionally.

This month’s special investigation into vulture firms isn’t the first time this magazine has addressed economic abuses in Puerto Rico.

The following, by Puerto Rican economist Ramon E. Daubon, appeared in September 1979. Daubon wrote that the economic system in Puerto Rico, based on courting manufacturers through tax breaks and low wages, would never be “self-sustaining.”

As outside owners came to have title or claim over the large majority of things of value on the island, the flow of repatriated earnings increased proportionally. To keep a positive inflow of capital every year to fuel its industrial expansion, Puerto Rico had to import ever-larger amounts to offset the ever-growing outflow.

This could not possibly work for long. It did not.

The island’s status as a territory had allowed U.S. corporations to easily exploit it as a tax shelter, but by 1979, the unsustainability of supply-side economics had become apparent.

[The economy] still moves along in jolts and stalls, motored by a sagging industry, a dying agriculture, the capricious vagaries of the tourist trade and, most significantly, massive injections of U.S. assistance to keep it afloat.

This model of development could not provide a home for more than two-thirds of its citizens. Unemployment is estimated between 20 and 30 percent despite one of the world’s lowest labor force participation rates.

Alex V. Her­nan­dez is orig­i­nal­ly from Chica­go and has bylines in the Chica­go Tri­bune, Chica­go Read­er, Chica­go Mag­a­zine, City Bureau, In These Times and 90 Days, 90 Voic­es. He was also a 2017 Peter Lis­agor Watch­dog Award final­ist for his work on an inter­ac­tive Chica­go Reporter data­base that shows where, how and when police mis­con­duct hap­pens in the city of Chica­go. He tweets at @AVHndz.
Have thoughts or reactions to this or any other piece that you'd like to share? Send us a note with the Letter to the Editor form.
More articles by Alex V. Hernandez
Feature
We Must Not Forget the Refugees Thrown Into Limbo by Previous Trump Orders
In May, Trump ended Temporary Protected Status for about 57,000 Hondurans living in the United States. They’re still dealing with the uncertainty.
Dispatch
These Community Activists Won Bail Reform. Now They Have To Force Judges To Comply.
Thousands of people still sit in Chicago’s Cook County Jail because they are too poor to afford bail.
Feature
After U of Chicago Cop Shoots Undergrad, Students Say It’s Time to Defund and Disarm Campus Police
Police shot student Charles Thomas last week while he was in the grips of an apparent mental health crisis.
Similar articles
Feature
Elon Musk Is Not the Hero Puerto Rico Needs
The island needs a revamped electric grid and fast, but privatization is not the answer.
Kate Aronoff
Feature
Democracy’s Death
Haitian dissidents find themselves the targets of massive repression
Ben Terrall
Feature
How Bad Politics and Bad Planning Make Hurricanes Even Worse
To prepare for the impacts of climate change, other cities must learn the lessons of Hurricane Harvey.
Ashley Dawson
Subscribe to our free newsletter
Fearless journalism that speaks truth to power
Limited Time: