This past weekend, at the Iowa Freedom Summit, union-busting Gov. Scott Walker, who may be considering a push for a right-to-work law in Wisconsin, took the stage using Dropkick Murphys’ ​“I’m Shipping Up to Boston” as his entry music. Although Walker may be a fan of the Boston celtic-punk group, the feeling is not mutual. In fact, they literally hate him. 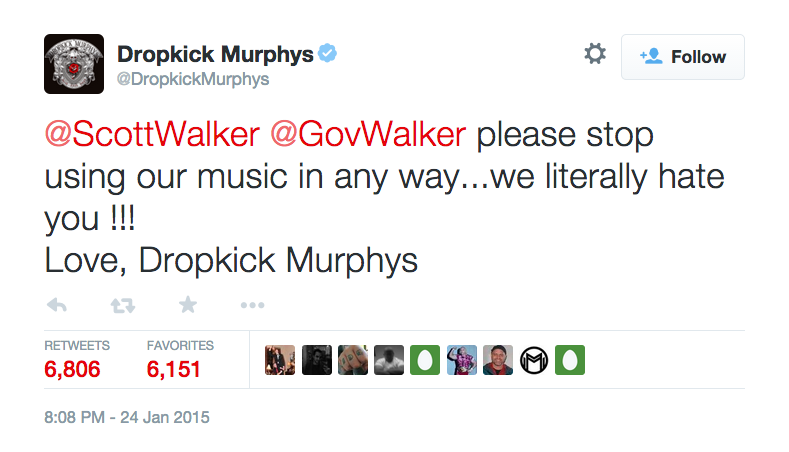 The song, about a one-legged sailor searching for his missing wooden leg and originally written by Woody Guthrie (who was certainly no friend of politicians like Walker), is apparently a favorite of Wisconsin Republicans. Dropkick Murphys took issue with Senate candidate Jeff Fitzgerald using the song in 2012, saying on their Facebook page:

“The stupidity and irony of this is laughable. A Wisconsin Republican U.S. Senate candidate - and crony of anti-Union Governor Scott Walker - using a Dropkick Murphys song as an intro is like a white supremacist coming out to gangsta rap. … We stand beside our Union and Labor brothers and sisters and their families in Wisconsin and all over the U.S!”

Dropkick Murphys’ disdain for Walker is hardly new. In 2011, during the protests against Scott Walker’s proposed Wisconsin Budget Repair Bill and its decidedly anti-worker provisions against collective bargaining, the band released ​“Take ​‘em Down,” in solidarity with the protestors. Apparently none of Walker’s staffers thought to Google ​“dropkick murphys scott walker” before picking the song.

Get your copy
Kevin is an educator and freelance writer in Chicago. Follow him on Twitter at @kevinsolari_.
Have thoughts or reactions to this or any other piece that you'd like to share? Send us a note with the Letter to the Editor form.
More articles by Kevin Solari
Labor
Elon Musk Once Reprimanded a Tesla Employee for Missing a Work Event for the Birth of His Child
Labor
GOP Prez Candidate Carly Fiorina Forgets to Register URL, Gets Mercilessly Trolled for Mass Layoffs
Labor
Thousands of New York City Teachers Protest Gov. Andrew Cuomo’s Free Market Education Reforms
Similar articles
Labor
Are Mergers the Answer for Fractious Nurses Unions?
David Moberg
Labor
Will Immigration Reform Address H-2 Guestworker Recruiter Violations?
Mike Elk
Labor
Machinists Rapidly Unionizing Ikea Warehouses: 3 Down, 2 to Go
Bruce Vail
Join our newsletter
Fearless journalism, emailed straight to you.
Subscribe and Save 59%